Medellín is awarded the 2016 Prize for its success in overcoming challenges of uncontrolled urban expansion and years of violence due to social inequalities. 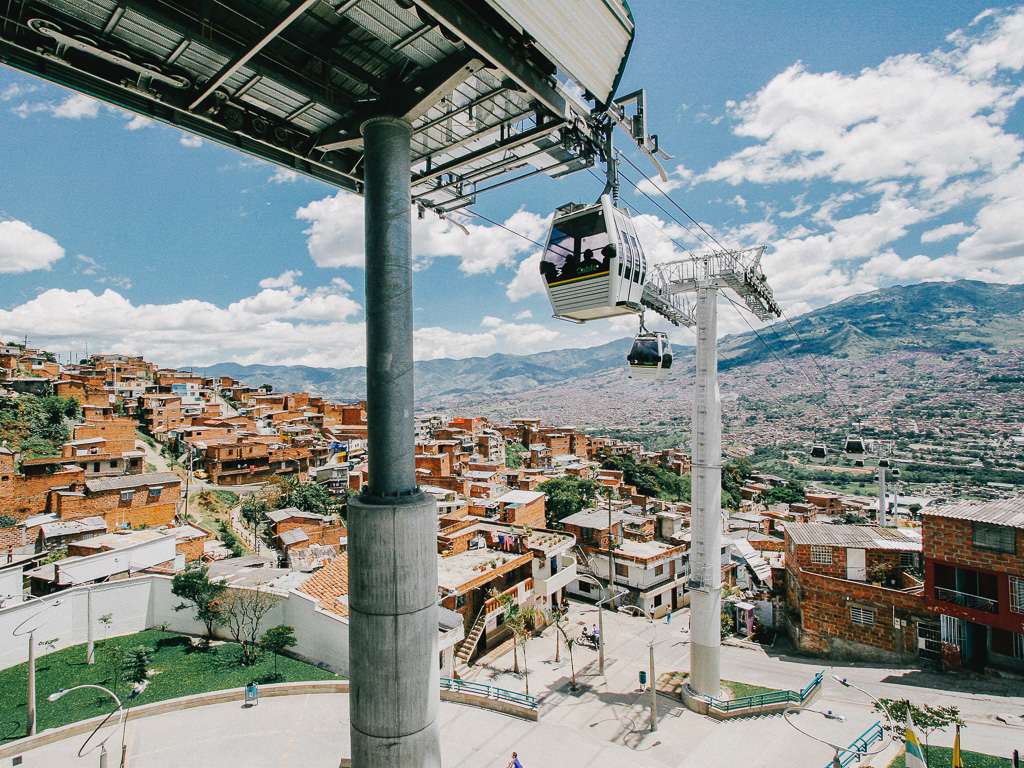 The MetroCable © Municipality of Medellín

MEDELLÍN tells the compelling story of a city which has transformed itself from a notoriously violent city to one that is being held up as a model for urban innovation within a span of just two decades. Today, Medellín is a city that celebrates life – resolute in its commitment to create a more just, more human, freer and happier home for its inhabitants.

Uncontrolled urban expansion had resulted in large expanses of informal settlements occupying the hills along the periphery of the urbanised zone. This is not a problem unique to Medellín; UN-Habitat estimates that by 2030, about three billion people, or 40 percent of the world’s population, will need proper housing and access to basic infrastructure such as water and sanitation systems. Medellín is thus representative of the global challenge facing many cities, especially in Africa, Asia and Latin America. The fact that the situation in Medellín was exacerbated by the drug-fuelled battles fought on the rooftops of its comunas only makes its transformation all the more exceptional.

Over a sustained period, a succession of leaders has demonstrated the willingness to recognise and take on deep-rooted problems – the wealth division, lack of equity and opportunities for its citizens that had allowed crime to overwhelm the city in the past – providing the much needed continuity for efforts to rehabilitate neighbourhoods and improve living conditions in the informal settlements.

Working with limited resources, Medellín has devised alternative means of generating funds – the publicly-owned utilities company Empresas Publicas de Medellín (EPM) is a profitable entity that has successfully expanded operations beyond Colombian soil and channels about 30 percent of its annual profits to social investment projects – and implemented catalytic projects in strategic areas where they can bring about the greatest impact.

The creative and non-conventional solutions that include the world’s first cable car mass transport system, library parks that double as social nodes and urban escalators that greatly improved mobility in hilly neighbourhoods earned Medellín a Special Mention in 2014. Since then, the city has continued its relentless pursuit for social equity, competitiveness and sustainability, introducing several other long-term projects that further demonstrate its commitment to improving living conditions for its inhabitants, especially for the most disadvantaged segments of society.

The Circumvent Garden is an intervention along the urban-rural edge of the eastern and western mountain ridges that seeks to simultaneously address several ecological, social and economic issues: control urban expansion and mitigate risks of landslides; improve the conditions of settlements; generate new public spaces; and connect the hillside and the city through multi-modal transport infrastructure, thereby improving accessibility to jobs and education. Local residents are trained in construction and agriculture, equipping them with skills that enable the community to be self-sufficient. The city goes on to take the unusual step to assess and legalise most of the informal housing units that were found to be structurally sound. This removes the uncertainty that accompanies displacement without the need for heavy investments on relocation programmes, while immediately making the settlers feel welcomed, giving them a sense of dignity and allowing them to start contributing as a valued member of the larger community.

The Unidades de Vida Articulada (UVA - Life Articulated Units) programme is another project where citizens are invited to be actively involved in the building of sports, recreational and cultural venues, many of which are adapted from existing utility water tanks that occupied large plots of previously inaccessible land. These venues are translated into communal spaces hosting activities that are decided by the communities themselves, giving them a say in how the venues are run and ownership of their surroundings.

Social integration is a massive challenge for many cities around the world, but Medellín has found the key to effective governance in social innovation. The city aims to empower every member of society, giving them a stake in the city and in the process gaining public trust and confidence. The Good Start programme centred on early childhood education is devoted to the development of the youngest segment of the population, clearly articulating the city’s commitment to invest in the future. Medellín has put the needs of the people at the forefront of planning and policies and inculcated a culture of open dialogue and cooperation between government, private entities and the people.

Proantioquia a non-profit organisation of private businesses in the Antioquia region, actively serves as a platform for government and private companies to work together to formulate policies and execute initiatives, based upon the principles of social responsibility and fairness. By leveraging on co-creation and the collective inputs of its citizens, the city has managed to create meaningful interventions that are not necessary large in scale but are acutely sensitive to specific context, resulting in solutions that incisively address the most pressing needs of each area.

Medellín has come a long way from its past, sending a powerful signal that inclusive and collaborative governance can overturn even the most difficult circumstances. On the whole, what the city has achieved is not only an inspiration for cities looking to overcome similar challenges, but also provides many valuable lessons for all cities worldwide. However, its success is at once remarkable and fragile. Successive city leaders will have to build upon what had been put in place thus far; urban solutions and creation of jobs must continue to keep pace with growth in order to prevent the reappearance of past problems. As the wave of positive change that has swept Medellín settles, the city will have to manage the evolving expectations of its people.

It is noted that key challenges remain, particularly the shortage of social housing for the underprivileged and those whose existing dwellings cannot be formalised, as well as the need for a clearer and cohesive urban plan at the metropolitan level to guide the development of the region. It is imperative that efforts to ensure the basic needs of citizens are met be sustained, for it is the message of hope that has given people unfettered belief and galvanised them to come together and steer Medellín in the right direction. O