Over the past 20 years, Medellín has shed its violent reputation and emerged as a model of social innovation and inclusive growth, leading to multiple awards including the 2016 Prize. Not resting on its laurels, it has launched more recent initiatives to tackle new challenges and further improve its citizens’ lives. 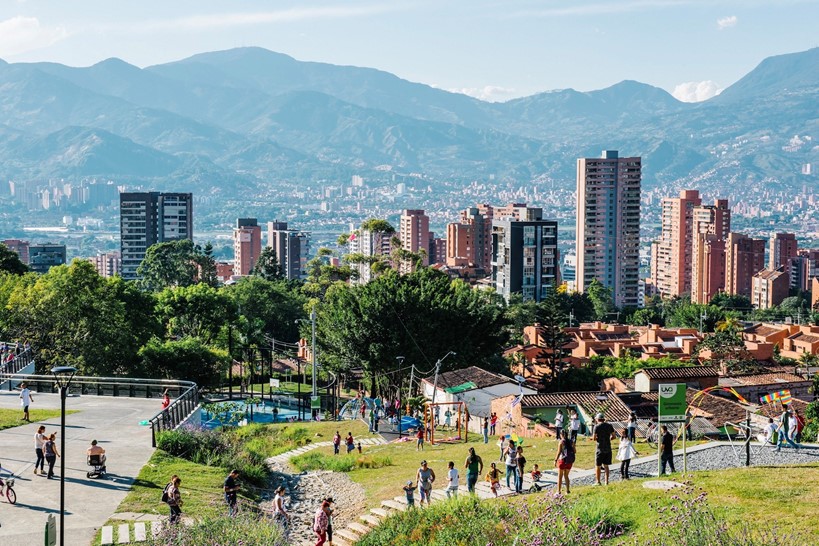 The metamorphosis of Medellín has put the city on the world map. In 1991, it had 381 murders for every 100,000 inhabitants, making it one of the most dangerous cities in the world. Beginning in the 1990s, successive mayors implemented a series of measures to slash the crime rate, rehabilitate and integrate the city’s widespread informal settlements, and improve its social equity, economic competitiveness and sustainability.

The government created the world’s first cable car mass transport system and installed outdoor escalators that linked previously unconnected hillside communities to the city’s main metro line and the rest of its neighbourhoods. Investments in social spaces such as playgrounds and sports facilities at the base of the cable car system’s pylons, as well as in education through new schools, library parks and small libraries at metro stations, also encouraged residents to stay out of trouble and become productive citizens. These and other innovative urban interventions earned the city multiple urban planning awards, including the 2016 Lee Kuan Yew World City Prize.

Even with its now sterling reputation, Medellín is not resting on its laurels. It has started new urban planning and social projects that aim to build on the solid foundation of its past work and ready the city for its new challenges, including rising ambient temperatures caused by climate change, how to curb its pollution to enable healthier lives, and the best ways to prepare residents for an increasingly volatile and uncertain job market.

“In many parts of the city, there were rubbish dumps next to ravines. They had become places for drug use because they were abandoned and isolated. After we transformed them into gardens, the children returned, the families returned.”

A city in green

As global temperatures climb due to climate change, cities will suffer the brunt of the consequences due to their tarmac and concrete that absorb the sun’s rays and turn up the heat. To combat this urban heat island effect, Medellín carried out a ‘30 Green Corridors’ project that developed the verges of 18 roads and 12 waterways into greenways that provide natural cooling in addition to beautifying their surroundings, increasing the city’s biodiversity and counteracting its air pollution.

“When we decided to plant the 30 green corridors, we focused on areas which most lacked green spaces,” said Medellín’s then-Mayor Federico Gutiérrez. “With this intervention, we have managed to reduce the temperature by more than two degrees Celsius, and already citizens can feel it.” Along Avenue Oriental, the city centre’s main road, 2.3 kilometres of paving was replaced by gardens, lowering the ambient temperature there by up to three degrees Celsius. 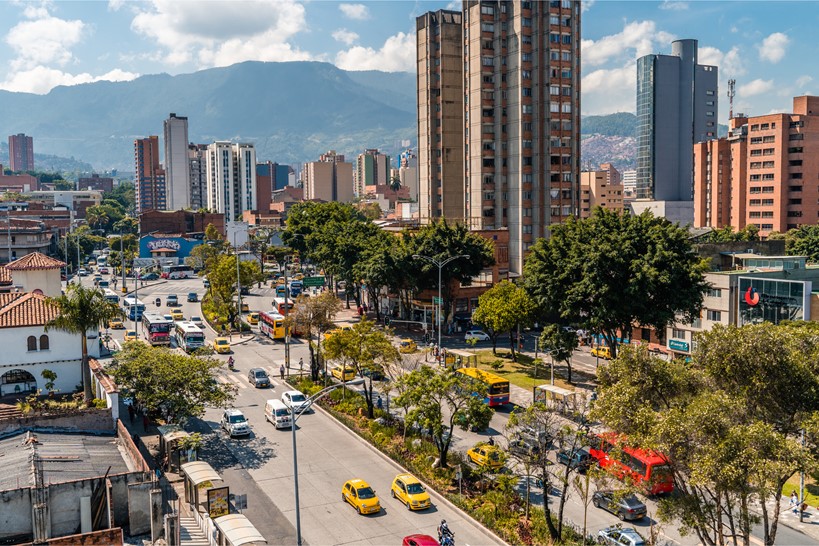 “In many parts of the city, there were rubbish dumps next to ravines. They had become places for drug use because they were abandoned and isolated. After we transformed them into gardens, the children returned, the families returned,” added then-Mayor Gutiérrez. The city has also trained 75 new gardeners to take care of the corridors, offering steady work to vulnerable residents from some of its poorer rural communities.

An even more ambitious project, called Parks of the Medellín River, will further enhance the city and solve a problem that plagues some other cities too. In the 1950s, the government built highways on both sides of the river that winds through the city, blocking residents’ access to the river. In 2014, the government launched an international design competition to create a new master plan for the entire length of the river that falls within the city and, in particular, the nine-kilometre stretch that spans the core of the city. 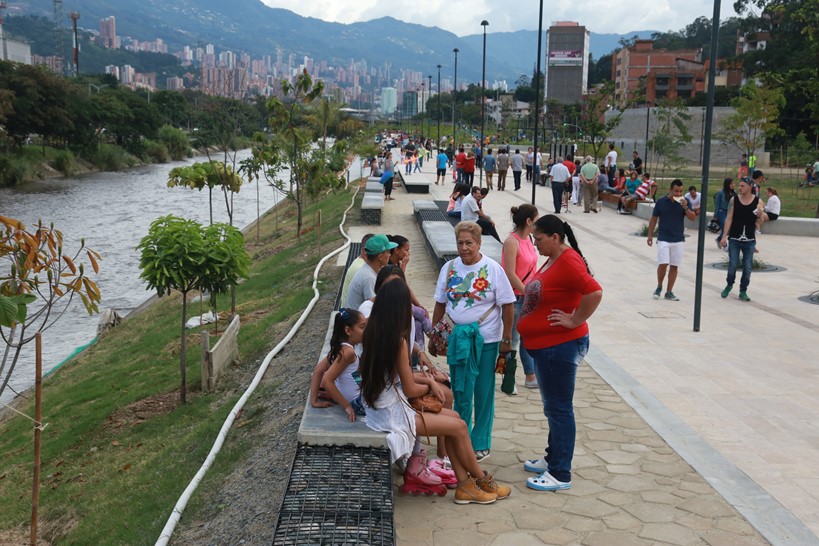 The winning proposal envisioned a revitalised river with almost 20 kilometres of parks, pedestrian walkways, bicycle lanes, community spaces and other amenities alongside it, as well as pedestrian bridges to better connect the two halves of the city on either side of the river. As part of the ongoing works, which will take up to 15 years to complete, a nearly 400-metre section of one highway has already been turned into a tunnel with a public park on top of it. “With the river parks and others like the Green Belt and the parks along our feeder creeks, we will get all the ecological connectivity that the city needs,” said Mr Juan Pablo Lopez, the project’s operating director.

A future in electric

Medellín’s award-winning public transport system is getting an eco-conscious upgrade too. In the past, the government invested in the cable car mass transport system, trains and a tram line so that more residents could travel across the city more easily for employment and recreation. Now, it is continuing those expansion efforts but also making the transport system more electric and thus healthier and more environmentally-friendly. 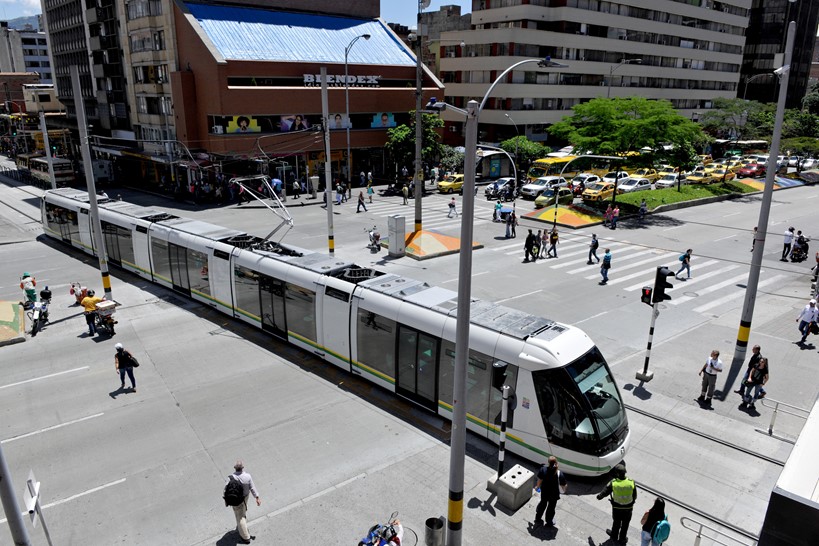 The city is progressively replacing its public buses with low-emissions vehicles, such as those that meet Euro IV, V or VI standards or use natural gas or electricity. This will reduce emissions of harmful fine particulate matter and carbon dioxide equivalent gases by 5.4 tonnes and 4.066 tonnes per year respectively. By end-2019, the city will have 64 fully electric buses.

It also plans to substitute its taxis with electric ones, beginning with 200 by the end of 2019 and 1,500 by 2022. To facilitate the transition to electric vehicles, the government and municipal energy company Empresas Públicas de Medellín have built 20 electric charging service stations. The city also has 17 natural gas service stations for vehicles that use the more environmentally-friendly fuel.

Encouraging cycling and walking is another key component of Medellín’s sustainable transport plans, with 2,530 bicycle parking spots under construction and the total length of bicycle routes to be increased to 80 kilometres by the end of 2019. Its public bicycle sharing system currently has 1,300 bicycles distributed across 57 stations.

Collaborations with other countries have also resulted in new ideas, funding and technologies to limit congestion in the city. In August 2019, South Korea’s Ministry of Land, Infrastructure and Transportation announced that it will help Medellín set up an intelligent transport system with an Integrated Traffic Information Centre, 159 vehicle detectors, information panels to supply road users with real-time traffic information, and other infrastructure and South Korean technologies to prevent and quickly resolve traffic jams along two sections of a key urban arterial road axis and its connecting roads in the city.

“The most valuable legacy is the knowledge, which is essential to develop more social projects.”

Beyond investing in infrastructural projects, the city has introduced more social initiatives to lift more residents out of poverty and prevent them from turning to criminal networks. In 2016, the government established a microlending programme called Bancuadra, which means ‘the world’s smallest bank’, to help the nearly 60 percent of the population that make use of illegal loans. The programme’s 0.91 percent interest rate per month is a fraction of the 30 percent that illegitimate moneylenders typically charge, and its loans are not given to individuals but to groups of five to 10 people who can be relatives, friends or acquaintances.

Each member of the group receives 200,000 Colombian pesos (approximately USD $59) and cannot ask for another loan until all of them have repaid their debt. This unique lending model encourages the group’s members to hold one another accountable and lend a hand if their fellow members cannot meet their repayments. Furthermore, they must attend four classes on topics such as loans, accounting and conflict resolution before they can receive their loans, and 12 more classes after the money is disbursed.

The programme has made over 12,000 loans to-date, with recipients using the loan to settle previous debts, defray education expenses, pay utility bills and rent, and invest in their businesses. Liliana Galeano, the programme’s director, added that it is enabling the government to collect crucial information about residents’ financial and social needs: “The most valuable legacy is the knowledge, which is essential to develop more social projects.”

The city has also set up enterprise development centres in lower-income neighbourhoods to assist residents in turning their business ideas into viable small and medium enterprises. The centres not only guide the residents in completing a business plan but also provide them with mentorship and access to microfinancing options. As of 2018, the 20 centres citywide have aided nearly 19,500 citizens and led to businesses with sales totalling 3.5 billion Colombian pesos (approximately USD $1.03 million), making them an invaluable employment and economic tool.

Reflecting on Medellín’s long journey to leave its violent history behind, and its path ahead, then-Mayor Gutiérrez said: “Our past is what makes our story worth telling… Medellín is a wonderful city, and a city that has transformed itself. Today, we serve as an example of social innovation and inclusive growth for the rest of the world.” O