For Medellín, co-operation between civic society, private enterprise, policymakers and academics laid the foundations for small, high-impact urban developments that targeted its social inequity and economic inequality. This ‘urban acupuncture’ transformed what was once the homicide capital of the world into a model of sustainable urban liveability. 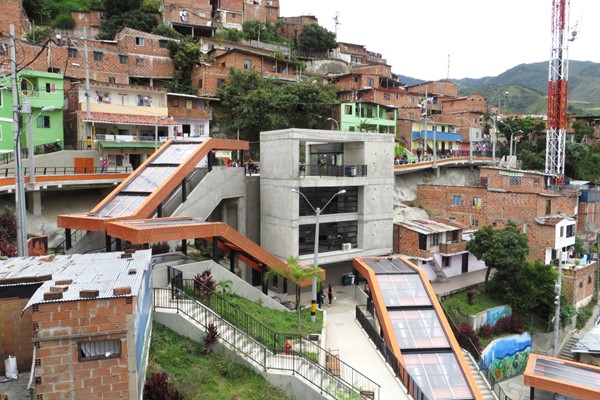 Over two decades ago, Medellín was crippled by a cycle of drug-fuelled violence, crime and corruption. The city faced deep-rooted and widespread inequality and political corruption. Drug traffickers and sub-state militias had, in some cases, supplanted civic authority over Medellín’s poorest, most overcrowded and marginalised communities. In 1991, the Inter-American Development Bank ranked the city’s homicide rate as the world’s highest, at 380 deaths per 100,000 inhabitants annually. Medellín, Colombia’s second-largest city, once labelled by Time magazine as “the world’s most dangerous city”, faced severe challenges to deliver safety, security and opportunities for its people.

Today, however, Medellín is renowned as a socially cohesive, business-friendly and people-centric city with extremely high quality of life. How Medellín transformed itself from a city facing daunting socio-economic challenges to one credited by the Lee Kuan Yew World City Prize as “a great inspiration to other cities facing similar issues” can be attributed to Medellín’s bold, visionary leadership, which encompassed all stakeholders, to deliver a series of small-scale, but high-impact, innovative urban projects.

The seeds for Medellín’s urban transformation were sown in 1991. Determined to control drug-related violence, Colombia decentralised power from the national level and granted greater authority and autonomy to its cities. Urban authorities were charged with mobilising citizens and resources to combat problems at the local level. In Medellín, this decentralisation and localisation of power manifested itself in a succession of municipal administrations that focused on alleviating poverty through infrastructural development.

The individual widely regarded as laying the foundations for Medellín’s development is Sergio Fajardo. Mayor of Medellín from 2004 to 2007, Fajardo redefined government’s role as a servant to the citizenry and champion of the poor. Under his stewardship, business leaders and civil society organisations were brought into the decision-making process. His administration strove to address three broad, but critical, issues: inequality, violence and corruption.

The approach to tackling the widespread violence wracking Medellín’s communities was two-fold. First, police presence was increased in the city’s most violent slums – to both fight crime and provide inhabitants with a visible symbol and sense of security. Second, Medellín focused on public transportation infrastructure as a multifaceted means of addressing crime, inequality, unemployment, and public and societal disengagement.

Medellín is located in a valley surrounded by mountains. Many of its poorest communities are on these inaccessible mountainous slopes. Cut off from the safety, security, amenities and opportunities of the city, these communities were characterised by crime, drug use and unemployment. To help tackle these issues, Medellín developed the world’s first cable car system dedicated to mass transit, the Metrocable.

“The greatest challenge that Medellín confronted was to generate confidence and trust,” said the city’s then-Mayor, Aníbal Gavíria Correa at the 2014 World Cities Summit in Singapore. “Trust was built when citizens saw results.” The Metrocable played an important role in encouraging social inclusion and integration, connecting poor neighbourhoods – literally and figuratively – to the lifeline of the city and all of its opportunities: economic, educational and cultural. 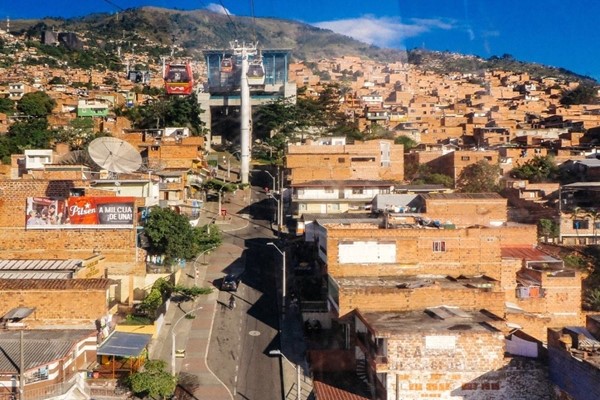 The implementation of new developments had many beneficial effects. In 1995, Medellín introduced a city-wide public train network called the Metro. As well as offering residents easier access to job opportunities and the city’s social life, development within communities was focussed around these Metro stations. Similarly, the construction of outdoor escalators to lessen commute times in a hilly neighbourhood had the knock-on effect of drastically reducing violent crime there. Another dual-role development was Medellín’s introduction of ‘library parks’. Built in the poorest and most overcrowded slums, these plazas played the role of public library, park and community centre. Alongside their educational and recreational purposes, the ‘library parks’ also helped develop social cohesion in fractured communities.

Medellín’s civic leadership realised early on that sustainable urban development could only be achieved by ensuring all the city’s stakeholders were active participants in the developmental process. PUIs like the ‘library parks’ were successful because the city facilitated a constant dialogue between all parties – local and regional authorities, local universities and research centres, business groups and citizen organisations. To encourage public participation, Medellín has also implemented participatory budgeting. This process empowers local rural and urban community associations to define development priorities and allocate 5 percent of the municipal budget to fund them.

Ensuring Medellín’s long-term growth is economically sustainable is critical to the city’s ability to continue to deliver infrastructural development. To facilitate this, Medellín has focused on making the public sector self-supporting and securing private sector financing. Much of Medellín’s urban development is paid for with profits generated by the city’s public companies, while its transport networks are financed in part by public-private partnerships. Each year, local public utilities company Empresas Públicas de Medellín (EPM) donates 30 percent of its annual profits towards social development in the city. The utilities company also works with urban planners to provide utilities and build infrastructure for Medellín’s most marginalised communities. However, while Medellín’s municipal government is pro-market, the private sector complements and collaborates with the public sector rather than simply subsidising it.

This partnership between the public and private sectors plays a critical role in fostering innovation. Both sectors were involved in the city’s new Medellínovation district – a technological hub jointly developed by the city of Medellín and RutaN – an organisation that aims to develop and fund companies involved in high-growth sectors like health, energy and technology. The opportunity offered by Medellínovation to sandbox innovation in South America has attracted interest from multinationals eager to establish regional bases. In turn, it has also attracted talent, created job opportunities and reinforced Medellín’s reputation as an innovative, thought-leading city.

“Medellín has served as an experience we can and want to share with the world.”

Medellín’s commitment to sustained innovative urban development has been widely recognised. The city’s leadership credits this to good planning and good communication, which has ensured that development initiatives are led by the people of Medellín – and not by the government.

Nonetheless, Medellín still faces challenges. Crime and violence, though reduced, are a continual problem, and the city must also address the issue of housing for its poorest residents. However, the positive impact of major transportation, utility, educational, cultural and economic development projects have inspired a sense of hope among citizens that these problems can be solved. This hope is important as without it, the city – local communities, businesses, social networks, and city leaders – would not succeed.