Medellín — reaching high and moving up

Medellín built upon its 2014 Special Mention recognition to become the 2016 Prize Laureate. Key leaders involved in the city’s dramatic transformation share the story of how they and their predecessors transformed the world’s most dangerous city into a ‘City for Life’. 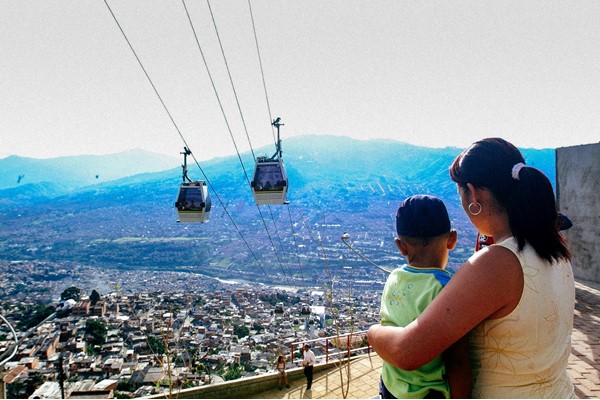 The MetroCable © Municipality of Medellín

Medellín in the 1990s, as former Mayor Aníbal Gaviria Correa recalled, was a place of “pain and a dark night”. It was “like a war,” said Gaviria of Colombia’s second-largest city, which was then wrecked by poverty and crime that made it “the most violent city in the world” with nearly 400 homicides per 100,000 residents. For Gaviria, who served as Medellín’s Mayor from 2012-2015, the pain is also personal; his elder brother, a former provincial governor, was kidnapped and later murdered by guerrillas during a march for peace that began in Medellín in 2003.

Medellín’s plight arose partly from economic isolation following the destruction of railways that linked the city to the coast in the 1960s. The city also experienced a high influx of rural migrants who established vast informal settlements in the mountains that surround the city. With unemployment hitting 23 percent in 1990, Medellín spiralled into a morass of drug-related crimes, gang violence and terrorism that earned it the unenviable status of ‘the world’s most dangerous city’.

Today, however, Medellín has much to celebrate. The city of 3.7 million inhabitants has reduced its homicide rates by 92.1 percent since 1991 and cut unemployment rates from 23 percent in 1990 to 10.2 percent in 2014. Extreme poverty, which plagued 19.4 percent of the population in 1991, fell to 2.8 percent in 2015, and Gaviria expressed his hope that the city will see “zero extreme poverty within the next four years.”

Medellín’s efforts to renew itself were recognised two years ago when the city was awarded a Special Mention in the 2014 Prize. Since then, Medellín has continued to make progress in urban and social innovation and has emerged as a model city for South America; this sustained transformation, which spans two decades and several changes in governments, has now earned Medellín what Gaviria regards as “the most important prize for cities in the world”: the 2016 Prize Laureate. 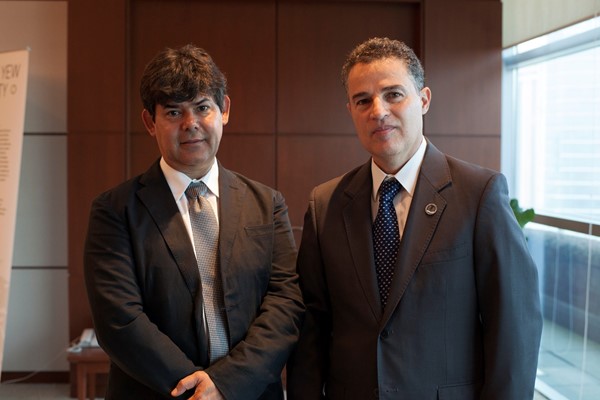 Geographically, Medellín is a landlocked city that lies in Colombia’s Aburrá Valley which runs between two mountain ranges at the northern end of the Andes. Over the decades, many migrants had set up homes on the slopes of these mountains, which became economically and socially isolated from other parts of the city. The uncontrolled spread of these barrios or urban neighbourhoods led to multiple problems, among them, landslides that killed many inhabitants and high crime due to the lack of opportunities and spaces for education and recreation.

To tackle this isolation and all its consequent problems, Medellín decided to invest in new public spaces as well as novel transport solutions to make the entire city more accessible, especially for the inhabitants of distant barrios. The most iconic of these investments is probably the MetroCable, a cable car system launched in 2004 which now carries some 30,000 people a day, for less than a dollar a ride, between the hills and the heart of the city.

Medellín also took former shopping mall escalators and installed these units in hillside neighbourhoods to make it easier for residents, especially the elderly and children, to get around the city. “We did not invent the cable car,” said Gaviria. “But we are the first city in the world to make cable cars a public mass transportation.” The MetroCable and escalators, he added, are ways to “put the benefits of public space in parts of the city that didn not have it in the past”.

Accessible and affordable public transport, according to Gaviria, are key “transformations that make the city unified, integrated and not only improve the quality of life but also the competitiveness of our city.” Taking this further, Medellín introduced in 2015 a new Ayachucho tramline using old tramcars retrofitted with pneumatic wheels. “Why pneumatic wheels?” remarked Gaviria. “Because we have very high mountains and you need pneumatic wheels to reach the mountains.”

The cable car and tram systems, which are being expanded, offer vital connections to the existing Metro or railway network that traverse Medellín’s metropolitan area. But on the ground, Medellín is also striving to place cyclists and pedestrians, as Gaviria put it, “on the top of our mobility pyramid.” Jorge Pérez Jaramillo, Medellín’s Director of Planning from 2012-2015, revealed that the city has prioritised non-motorised mobility in order to reduce congestion and improve the environment. “Only 14 percent of our people use cars,” he said. “We have 40 kilometres of bicycle lanes today, but we hope to have 400 kilometres in the next ten years and the same for pedestrian parks.”

“Accessible and affordable public transport are key transformations that make the city unified, integrated and not only improve the quality of life but also the competitiveness of the city.”

Apart from improving mobility, Medellín fought violence and inequality by investing in public spaces. Such spaces, which are open to all residents, “make the city more equal”, according to Gaviria. “You need to invest in very good public spaces like parks, universities, schools and hospitals.” Medellín’s urban landscape now boasts some 20 Life Articulated Units (UVAs or Unidades de Vida Articulada), which are community spaces created in under-utilised areas, such as around service reservoirs in disadvantaged neighbourhoods. Formerly fenced up and out of bounds, the area around these water tanks have been converted into facilities for sport, cultural activities and education.

To address the environmental and social risks of informal settlements in the mountains fringing the city, Medellín created what is known as the Circumvent Garden, a montane green belt that puts a halt to urban sprawl but also provides public spaces and economic opportunities for the surrounding inhabitants. “We are in a very narrow valley with mountains 1,000-2,000 metres high,” explained Gaviria. “We needed to stop the city from growing into these parts, because it was not good for the people there and for all (of) the valley.” Apart from preserving the forests that prevent erosion and contribute to the city’s pleasant climate (Medellín is often nicknamed the ‘City of Eternal Spring’), the Circumvent Garden offers sports facilities and farming sites and reduces the isolation of the hilltop communities.

In another part of the city called Moravia, which was a former waste dump occupied by thousands of families, Medellín has transformed the barren landfill into Moravia Garden, a botanical ‘garden of life’ managed by members of the community. Gaviria pointed out that this garden is an example of a long-term project that involved “several mayors, and not only the government of the city, but academics and the people – all working for the achievement of community goals which include respect for life and equality.”

“Respect for life and equity are the values that underpin Medellín’s transformation, but above all, the city’s resilience and determination to move away from its painful and violent past stem from the love and the pride of the people of Medellín for the city.”

Education, added Gaviria, is another factor that contributes to “a more equal and developed society” in Medellín. Early childhood education has been prioritised through the building of 18 new kindergartens in disadvantaged barrios (‘urban neighbourhoods’) where Library Parks also allow residents to easily borrow books. Quality primary and secondary education is being promoted via a system of Master Schools, and higher education is getting a major boost with the building of a new university campus on the grounds of a former jail. “We take out the prison and we are building a university,” stated Gaviria. “That is part of the change, the transformation of Medellín.”

On the public finance front, Medellín’s urban investments owe much to the city’s utilities firm Empresas Publicas de Medellín (EPM), which ploughs back about a third of its profits into public infrastructure and social projects. The resulting developments, from the MetroCable and UVAs to new schools and parks, are important, said Gaviria, because they “show the people of Medellín that things are getting better.” All these public spaces, in his view, are urban innovations that make the city more equal and boost confidence between the people and the government. “This allows you to unify the people in your vision of the future.”

Respect for life and equity are the values that underpin Medellín’s transformation, but Gaviria adds that above all, the city’s resilience and determination to move away from its painful and violent past stem from “the love and the pride of the people of Medellín for our city.” For Perez, the 2016 Prize will be another source of pride for Medellín. “Previously, we were segregated and isolated because of our problems,” he said. “But we are now the awarded city for the Prize and that is very important to our people, because now we feel integrated and part of the world, and that means access to economic development, resources and the opportunity to be part of the global network of cities.” O