Vertical greenery is increasingly used in cities to both raise quality of life and improve urban environments and eco-systems. It can help to modify temperatures, improve air quality, increase biodiversity, and improve peoples’ physiology and mental health. Yet, how sustainable is it in the long term? 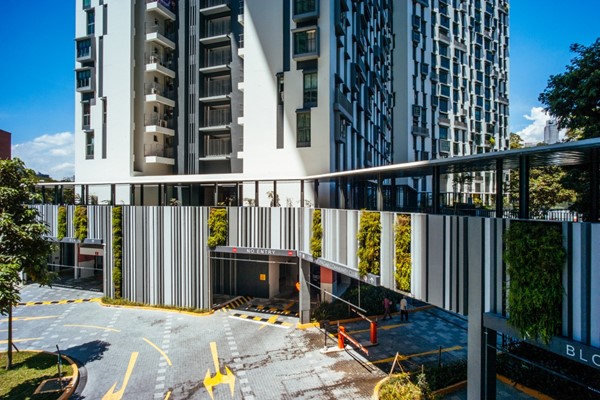 In cities with finite land and increasing populations, green space is at a premium. In developing cities, greenfield sites are often turned over to housing rural-to-urban migrants, while real estate prices in most cities rise in proximity to parks and nature. This often results in demographic shifts within urban areas as gentrification drives the poorer classes into the city’s most built-up districts. In this context, what role does vertical greenery play in a city’s approach to socio-economic sustainability?

Vertical greenery is not new. The Hanging Gardens of Babylon was both a wonder of the world and a textbook example of integrating green space into a building’s aboveground superstructure. Today, vertical greenery could be any form of greenery on residential, commercial or industrial buildings’ walls, façades, rooftops, atriums, balconies or sky gardens.

The positive attributes of urban greenery are well established. But Dr Tan Puay Yok, Associate Professor at the Department of Architecture, School of Design and Environment, National University of Singapore, argues that vertical greenery can broadly be classified as having either “use value” or “non-use value”. The former refers to the direct usage of, or physical interaction with, the green space. For vertical greenery, this tends to occur only in residential buildings or those commercial buildings with public access.

Non-use value includes environmental benefits, such as vertical greenery reducing a building’s surface, ambient and radiant temperatures; increasing an urban area’s bio-diversity; and improving air quality. The non-use value of vertical greenery can also have positive economic and social effects, as it can increase a building’s rental value, or a green wall or rooftop garden can be aesthetically pleasing. 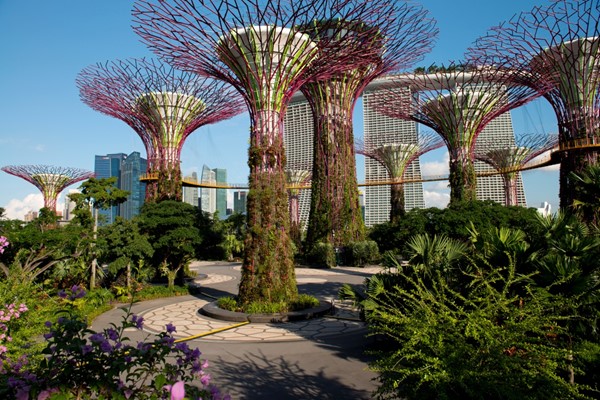 The Supertrees at Gardens by the Bay, Singapore © Urban Redevelopment Authority Singapore

Although vertical greenery has a long history in urban space, as yet there are no widely adopted metrics or frameworks in place to assess its impact. Professor Wong Nyuk Hien, Department of Building, School of Design and Environment, National University of Singapore, believes this needs to change. In the climate of Southeast Asia, developing green spaces in close proximity to residential areas needs to be closely managed, as unchecked growth of foliage might have adverse impacts, such as increasing humidity or creating breeding grounds for insects. “Vertical greenery, by virtue of it being a relatively new phenomenon, has not been subjected to much systematic process,” says Prof. Wong.

“We [Prof. Wong and fellow researchers at the National University of Singapore] are currently looking into aspects of thermal comfort, objective placement and plant selection criteria for urban greenery systems,” says Professor Wong. “For our research to be translated into practical application, there must be better collaboration between academia and the building and construction industry so that novel ideas on vertical and rooftop greenery can be tested.”

However, Assoc. Prof. Tan believes that vertical greenery’s benefits, combined with the falling cost of implementation and the introduction and growth of regulations on environmental standards for buildings, means vertical greenery has become a key component in urban authorities’ policies. “There is a push to ‘green upwards’ amongst policymakers, simply because there is so much potential in the elevated spaces,” says Assoc. Prof. Tan.

There is no one-size-fits-all solution to vertical greenery. In many cities, in both the developed and developing world, there is increasing economic disparity. Engaging with vertical greenery projects is not a priority for many at the bottom of the economic scale. However, where urban planners keep socio-geographical context in mind, appropriate best practices can be exported. For examples, public officials from Guangzhou have been travelling to Singapore to assess what strategies, policies and technologies could be effectively transferred. Guangzhou has replicated both surface-level greening practices, such as Singapore’s codified planting of trees alongside roadsides, and its vertical greening of bridges and flyovers.

“There is a push to ‘green upwards’ amongst policymakers, simply because there is so much potential in the elevated spaces.”

China is also incorporating vertical greenery as part of their overall cityscape design, while cities like New York have shown that urban landscapes can be redesigned effectively to vertically introduce green space. “Governments can help to promote the use of vertical greenery by reducing the cost of installation through subsidies, while regulatory frameworks provide a holistic, albeit generalised, manner of ensuring urban sustainability,” says Prof. Wong.

Canadian municipal authorities in particular have effectively implemented an approach that combines financial incentives within a strict regulatory framework. In 2012, Toronto implemented a by-law that requires new buildings with a minimum gross floor area of 2,000-square metres to incorporate green roofs into their design. Vancouver has implemented an urban greening strategy that incorporates tax breaks for developers who incorporate temporary community gardens, but that also supports strong public engagement.

In Vancouver, this move towards active public participation saw the number of community garden plots on Vancouver’s public land more than double to over 4,000 since 2010. Education and awareness are increasingly important parts of any vertical greenery initiative. The more public buy-in and engagement the public has, the more sustainable grassroots projects are. Vancouver currently has 19 urban farms, but the early years of the city’s greening strategy were marred by intra-community conflicts over communal gardens and farms. 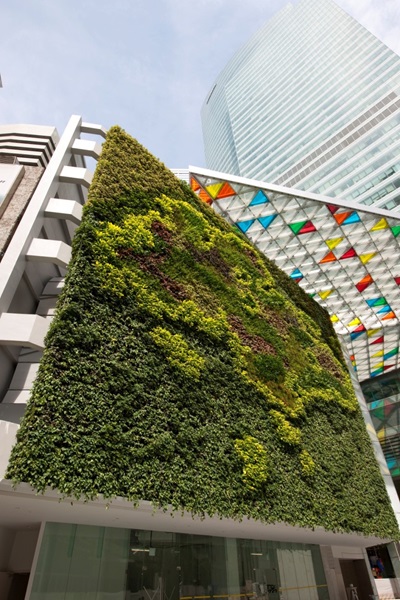 Placing a value on the economic benefits green space brings to a city is also problematic. However, a report commissioned by the city of Philadelphia, in the US, attempted to assess the value of the city’s green spaces. The report estimated that Philadelphian residents save USD $70 million in medical expenses by using parks, and Philadelphia’s green spaces save the city at least USD $7 million each year in storm water and air pollution control and management.

While there are few widely accepted metrics or frameworks in place to assess the impact of vertical greenery on a city, the greening of urban buildings can have other, less obvious benefits. “Singapore has an image as a ‘garden city’,” says Assoc. Prof. Tan, “and there is a certain brand associated with that.” This reinforces the international perception of Singapore as a highly liveable place that has frequently seen it ranked as Asia’s most liveable city. As Assoc. Prof. Tan says, “If you get the brand value, you can then put a dollar value to it.”

As cities embark on new and retrofitted building projects to house rising populations, the incentives to integrate vertical greenery are there. How developers respond will literally shape the look of the world’s cities in the future. O