By setting up urban farms, cities can reduce the emissions involved in transporting food, increase their greenery, slow stormwater runoff to avert floods and become more resilient. From subsidising rooftop farms to creating one-stop centres for free supplies, these are 10 ways that cities are supporting urban agriculture. 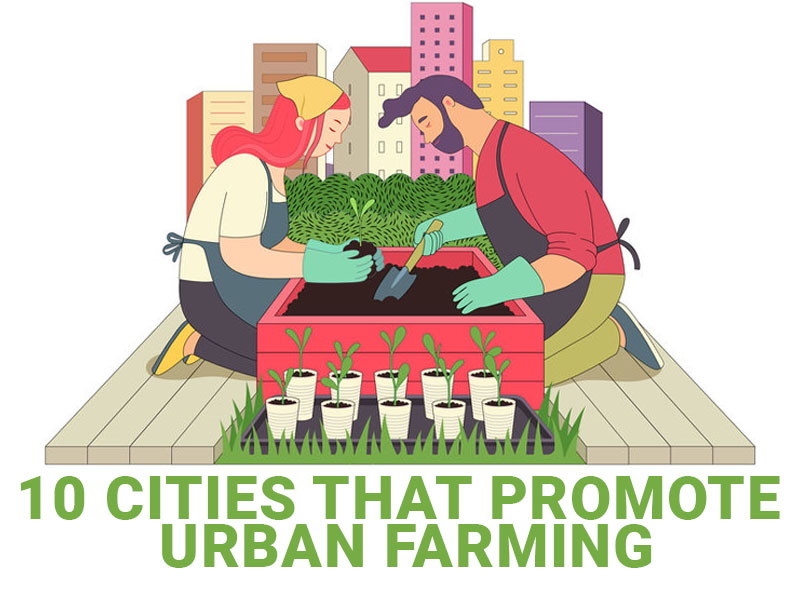 In India, the state of Bihar is subsidising half the cost of building urban rooftop farms, beginning with the city of Gaya. “Rooftop farming not only provides an additional income for residents but ensures green cover across urban areas,” said the state’s Department of Horticulture.

It is also providing would-be farmers with training, seeds and plants, and other important equipment such as irrigation systems. “We have identified the species that will be ideal for the farms, including vegetables, medicinal plants, and ornamental varieties that add to the beauty of the farms,” it said.

For the city of Dubai in the United Arab Emirates, vertical farms will be an essential part of its future food security. In such farms, plants are stacked on top on one another with their roots submerged in nutrient-rich water, reducing the use of water by up to 99 percent compared with traditional farming in the field.

The government has allocated 7,600 square metres of land to establish 12 vertical farms in the city under a partnership with a local biotechnology firm, which will construct the farms and supporting infrastructure such as a water desalination plant, LED lighting and automatic irrigation systems.

Separately, the catering arm of the state-owned Emirates Airlines is partnering a different vertical farming firm to construct a vertical farm in the city that will be one of the largest in the world. The facility will span more than 130,000 square feet (approximately 12,100 square metres) and generate 2,700 kilograms of leafy greens daily for the airline’s in-flight meals.

Cities with substantial water bodies could benefit from floating farms. Rotterdam in the Netherlands is leading the way with the world’s first floating farm for dairy cows that opened in 2019. The farm is located in the city’s Merwehaven harbour and houses 40 cows which produce about 800 litres of milk every day. The milk is then sold at the farm and retail stores.

The cows feed on the city’s food waste and grass clippings, and their manure is used as fertiliser. Their urine is also collected and separated into salts, which are added to the fertiliser, and water, which is diverted to cool machinery. With the farm’s success, the city is considering using floating platforms to grow vegetables and rear chickens. 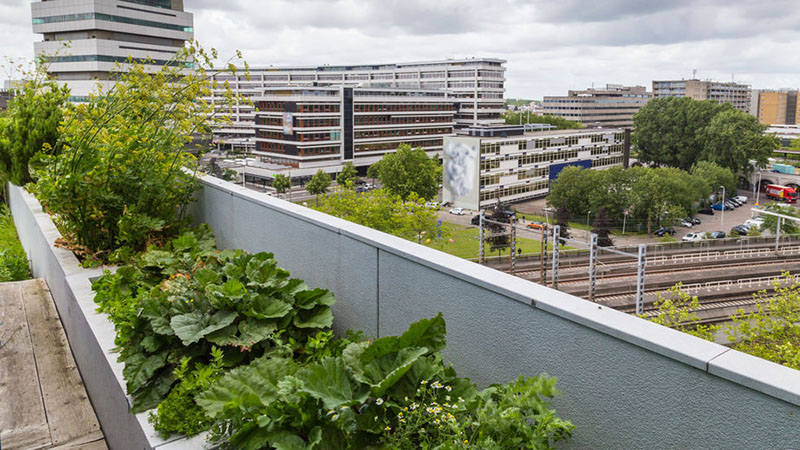 Vegetable roofgarden on top of an office building in the city centre of Rotterdam, Netherlands © Hilda Weges/ 123rf.com

For many residents in the city of Medellín, Colombia, farm to table is a matter of a few steps. Under the government’s ‘Huertas con Vos’ programme, which translates to ‘Gardens with You’, families can attend workshops to learn how to plant, care for and harvest vegetables in their homes. They also receive tool kits that include a rake, watering can, fertiliser and seeds.

“The initiative enables families to improve their food security, save up to COP $70,000 (approximately USD $18) per month, and strengthen relationships,” said the city’s Secretary for Social Inclusion Paulina Suárez Roldán. Households that produce more than 50 kilograms of food per year can also get assistance to sell their surplus crops.

To encourage more people to grow their own produce, Melbourne, Australia has created community gardens across the city, including several that are reserved for lower-income residents living in public housing. “These gardens provide an opportunity to grow food and plants, learn new skills and meet new people,” said the government.

The city also published an online booklet to guide citizens in cultivating crops in other spaces, such as their homes’ balconies and backyards and apartment blocks’ rooftops and courtyards. The tips include using straw-based mulch for vegetable plants and layering compost or manure on top of soil patches at the end of each growing season to maintain their health.

In Seoul, South Korea, residents can apply for financial and professional support from the government to set up urban farms. Between 2012 and 2018, the total area of such green spaces increased six-fold to about 1.7 million square metres, with the majority found in small patches between apartment blocks and on rooftops.

The government funds up to 100 percent of the initial installation fees of accepted projects. Each district also receives five million won (approximately USD $4,054) annually to hire experts to give lectures and personalised gardening tips, such as how to raise soil productivity and use safe pesticides, to urban farming communities.

Hobbyist farmers in San Francisco in the United States can visit Urban Agriculture Resource Centres to pick up free supplies, take gardening classes and meet likeminded people. Some of the centres also have demonstration plant beds and help-desks with master gardeners to give advice and solve problems with plants.

“You can walk up with a leaf from your plant and they will tell you what is wrong with it and how to manage it organically,” said Ms Mei Ling Hui, the city’s programme manager of community gardens and urban agriculture. “You can also ask them questions such as which kinds of tomatoes will grow well in your neighbourhood.”

In urban agriculture as in other things, many hands make light work. The city of London, Ontario, in Canada has developed an online ‘Urban Agriculture Inventory’ where residents can review and suggest potential sites for farms and vegetable plots, as well as share information about where to get technical advice and resources1.

The city also collaborates with community partners on various projects. For instance, while it is replacing the plants in municipal planter boxes with native fruit, nut and other edible species, its partners are helping to distribute topsoil, mulch, compost, rain-harvesting barrels and other useful items to residents growing food.

09: A champion in government

In Washington, DC in the United States, the Office of Urban Agriculture advocates for and advances efforts across different government agencies. These include tax rebates for private property owners that lease their land and rooftops to urban farmers, and the rental of public land for cultivation.

The office is also working with schools to develop vegetable gardens, and to ensure that children at public schools receive at least 10 hours of garden-based learning per year, so that they have a better understanding of urban agriculture and the connections between food systems, nutrition, environmental sustainability and health.

As cities mature, redevelopment projects are an opportunity to integrate urban agriculture into neighbourhoods. In China, Shanghai is rebuilding its Sunqiao district to incorporate urban farms among its homes, offices and public spaces. These will grow leafy greens such as spinach, kale and watercress that comprise more than half of the Shanghainese diet.

The design for the district includes the placement of high-rise towers so that they do not cast shadows on intended farmland. A wetlands park will also have floating pallets of crops and learning stations to educate the public about them. The district’s designers said: “Sunqiao will celebrate food production as one of the most important functions of a city.” O