Back on board — reviving public transit

Cities are experiencing steep declines in public transport ridership due to COVID-19 lockdowns and social distancing measures. In this fourth and final article in a series examining cities’ responses to the pandemic, we look at ways they are transforming public transit for the crisis and beyond. 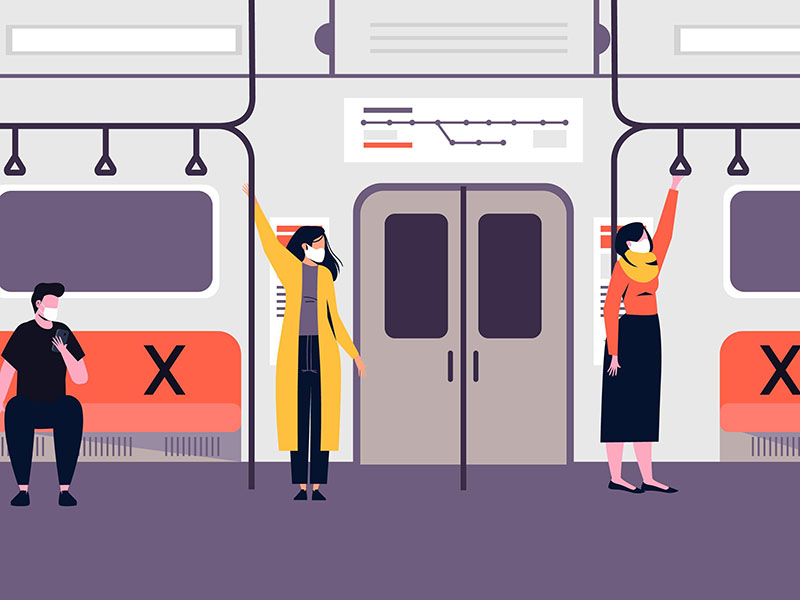 How can public transit in cities bounce back from the pandemic? © Freepik/freepik.com

Cities worldwide are currently facing a crisis in public transport. Since the start of the COVID-19 pandemic, ridership on buses and trains has plummeted in many cities due to lockdowns and movement restriction orders, causing a steep decline in public transport operators’ revenues. Even cities that have exited lockdowns have imposed capacity limits on their buses and trains to enable physical distancing to limit the spread of the coronavirus. Furthermore, some commuters may be turning to private vehicles and other modes of transport such as bicycles or personal mobility devices due to their fear of contracting the coronavirus on shared public transport.

In the longer term, changes wrought by the pandemic, such as firms moving out of downtown areas and opening satellite offices, and more people working from home permanently or partially, may change transport patterns and dampen public transit systems’ ridership and revenue. Transport for London, the British capital’s public transport operator, estimates that ridership across its buses and trains will be 20 percent lower in 2021 and 2022 compared to pre-pandemic levels, while the Metropolitan Transportation Authority of New York in the United States has forecast a budget deficit of USD $16.3 billion in total from 2020 to 2023 due to the COVID-19 outbreak. In the Australian state of Victoria, which includes Melbourne, nearly one in 10 public transport commutes could be replaced by car trips indefinitely as a result of the pandemic, according to recent research.

To spur people to take public transport in the wake of the COVID-19 crisis, cities are implementing measures to reduce the likelihood of disease transmissions on buses and trains. They are also persuading some rush-hour commuters to travel at other times, so that there is enough space on-board for everyone even with physical distancing requirements. Meanwhile, designers and firms have proposed new layouts for buses and trains to boost commuters’ safety and convenience. Many of these initiatives and ideas can improve public transport, not just to cope with the COVID-19 outbreak, but for the long term.

By modifying the interior of buses and trains, public transport operators can minimise the risk of disease transmissions and reap other benefits. In an international competition hosted by China’s Shanghai Jiao Tong University in June 2020 to find new designs for everyday life after COVID-19, the winning entry was a “pandemic-proof” bus that features innovations to limit contact among passengers. These include alternating the direction of bus seats so that no two seats that are side by side face the same direction, and placing plexiglass between the seats to create a semi-private cocoon for each commuter. A sliding door that spans the length of the bus replaces the conventional front and rear bus doors, so that people can enter and exit the bus without crossing paths. With a much larger door, more people can also board and alight at the same time, decreasing dwell times at bus stops and travel times.

Tangerine, a London-based design firm, has also proposed a new, adaptable interior for train carriages. Its concept has slidable screens that can be deployed during pandemics to divide each carriage into smaller, isolated zones, as well as booths of seats that can be folded up or down, and locked into position by staff, to expand capacity during peak hours or ensure that seats are physically distanced when needed. Perch seats along the carriages’ sides angle passengers away from one another for more privacy and health safety. Mr Martin Darbyshire, Chief Executive of Tangerine, said: “Our design goes beyond quick fixes in response to COVID-19 that would be unsuitable once the risk of the virus subsides, to propose a better metro train that can increase capacity and minimise the future risk of disruption due to new viruses.”

Other infrastructural changes could enhance the public transit experience and allay health-related fears. Seoul in South Korea has built state-of-the-art bus shelter booths that are equipped with ultraviolet light sterilisers to stop the transmission of airborne viruses within them. The enclosed, air-conditioned shelters also have automatic doors with thermal imaging cameras to block people with high body temperatures from entering them, as well as charging points for electronic devices, free Wi-Fi, and sensors and cameras to detect fires and crimes.

Hong Kong’s MTR Corporation, for its part, has deployed automated robots it invented with a firm to clean the city’s trains and train stations. The robot sprays an atomised hydrogen peroxide solution that penetrates small gaps to kill viruses and bacteria on surfaces that are difficult to reach manually. “We understand passengers’ concerns about hygiene, especially during the COVID-19 outbreak, and hope this helps by providing greater health protection for our colleagues and customers alike,” said Dr Tony Lee, MTR’s Operations Director. 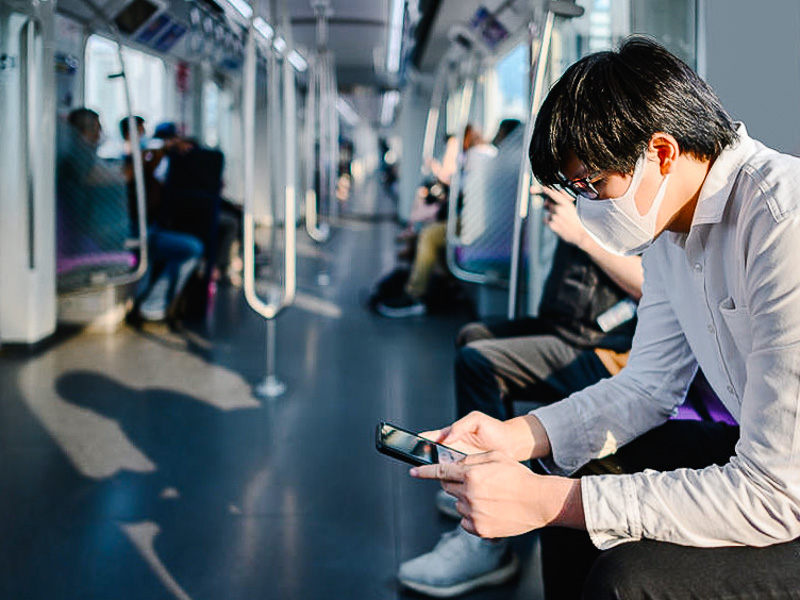 As cities carry out physical distancing rules on their buses and trains, reducing the vehicles’ capacity, getting some peak-hour commuters to travel at other times can also curtail ridership losses. “By spreading commuter usage more evenly over a four-hour window, one subway car could serve about 30 percent more commuters while never operating above 85 percent of peak occupancy. Across a network, this alone would compensate for nearly half of the loss of peak transport capacity due to distancing measures,” said Mr Costis Maglaras, Dean of the Columbia Business School in the United States. In the longer term, smoothing out peaks in public transport use will also reduce crowds and make commutes more pleasant for all.

In June 2020, Jakarta in Indonesia introduced two shifts for staff at its government ministries and state firms, and required businesses to do the same. Employees could start work between 7 am and 7.30 am, or between 10 am and 10.30 am, and finish their day eight hours later. “Our assessment showed that over 75 percent of commuter rail passengers are workers, and nearly 45 percent of them leave for work at the same time, at between 5.30 am and 6.30 am,” a government spokesman said, adding that the dual shifts would relieve pressure on the city’s public transport systems and alleviate crowdedness.

Chicago in the United States, on the other hand, is providing more ridership information to commuters to motivate them to change their travel patterns voluntarily. The Chicago Transit Authority (CTA) has developed bus and rail ridership dashboards, available at its website, that are updated weekly and show the public transport systems’ ridership trends in the previous two weeks, along with the likelihood that commuters will experience crowdedness on specific bus routes and rail lines at any given time. “With these dashboards, people can better plan their trips on our buses and trains to avoid traveling during heavy ridership periods, whenever possible,” the CTA said.

Cities aiming to better manage their public transport ridership can also look to the reservation system that Beijing, China, is piloting at two of its busiest train stations, namely the Shahe and Tiantongyuan stations. People who want to enter these two stations between 6.30 am and 9.30 am on weekdays can use a smartphone app to book one of the limited 10-minute slots to do so via a fast track. Those who do not have a reservation must wait in line outside the stations. Mr Xian Kai, Deputy Director of Research and Development at the Beijing Transport Institute, said that the reservation system saves commuters time: “Usually, they have to wait outside the stations for 10 to over 20 minutes. If they reserve an arrival time online, they won’t have to come so early, and can just show up at the agreed time.”

“For the sake of public health, economic recovery and environmental sustainability, we must keep the momentum going and preserve the appeal of public transport.”

A fresh look at ticketing

New ticketing options that are more suitable to the post-COVID-19 landscape could enable public transport operators to increase their ridership too. Traditional monthly and annual public transport passes may not be worthwhile for the growing number of people who are working from home part-time, and who may switch to private or private-hire vehicles for their less frequent trips to the office. To cater to these commuters, the National Union of Rail, Maritime and Transport Workers in Britain has suggested creating more affordable annual train passes that are valid for two to four days each week, rather than every day. Under the union’s plan, for example, an annual three-day-a-week rail pass from Brighton to London would cost GBP 2,748 (approximately USD $3,645), considerably less than the current GBP 4,580 (approximately USD $6,074) annual pass between the two cities.

In Skåne County, Sweden, which includes the cities of Malmö, Lund and Kristianstad, people can lend their monthly and seasonal public transport passes, which are accessed through the Skånetrafiken transport operator’s mobile app, to others when they are not using them. The temporary transfer is done through the app and can be specified to last from four hours to rest of the pass’s validity. Such passes would also be useful for part-time telecommuters, including for colleagues who work in the office on different days of the week.

In July 2020, the World Bank noted that public transport remains the backbone of sustainable mobility in cities, and is essential to their economic recovery from the COVID-19 pandemic. It said: “Most public transport operators have quickly stepped up to the plate and taken concrete action to make transit systems COVID-safe for staff and passengers. For the sake of public health, economic recovery and environmental sustainability, we must keep the momentum going and preserve the appeal of public transport.” O