How can cities ensure success in changing times?

The world is unpredictable. Sudden changes – be they environmental, economic or socio-political – can reshape the established order, disrupt existing patterns and institutions and transform previously unassailable assumptions. To build resilience in this environment is to make cities’ communities, institutions and systems better prepared to face an inherently unpredictable world. 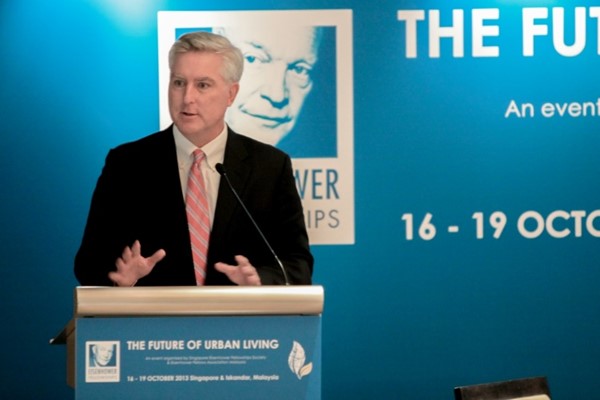 Cities are defined by their ability to respond to the unpredictable. Changes – be it environmental, economic, social or political – are often unexpected, and urban authorities can scramble to respond to events. This is often not through lack of preparedness or anticipation, but when faced with unprecedented change – be it financial collapse or natural disaster – a city’s response is often framed in or based on pre-determined contexts.

How then can a city ensure that its people, systems, institutions and community possess the resilience to respond to the many variables of today’s complex and shifting environment?

The need for resilience

Events over the past year have brought the need for resilience into even greater focus. At least nine million people were affected when Typhoon Haiyan struck the Philippines in November 2013, despite Filipino authorities being forewarned and prepared. With hurricanes and typhoons in the Asia-Pacific projected to grow more frequent and more intense, the resilience of Asia’s coastal cities and infrastructure will be increasingly tested.

The World Bank has already identified the coastal megacities of Manila, Ho Chi Minh City, and Bangkok at risk of more and greater flooding. However, not all the shocks or stresses that Asian cities face are due to flooding. Ashvin Dayal, Managing Director, Asia, of the Rockerfeller Foundation, identifies water scarcity in particular as posing a major challenge for cities across parts of Asia, especially South Asia.

While New York City has been rightly recognised for the renewal of its physical infrastructure, the city administration was unprepared for the storm surge caused by Hurricane Sandy hitting in the autumn of 2012. Water flooded a transformer, causing it to explode and leaving parts of lower Manhattan without power for a week. In the past two years alone, heat waves across Argentina, India and the US have led to rolling blackouts as electricity grids collapsed in the face of demand. In every instance, existing systems and practices were insufficient to cope with unprecedented events.

To better build cities’ resilience, Mr Rhoda advocated a ‘system of systems’ across multiple domains. In this system, an interconnected series of domains – social, including human assets such as commerce and culture; services, such as energy and transport; man-made environment, such as land use; and natural environment, such as climate and population — allow cities to monitor and respond to unprecedented ‘black swan events’2.

The multi-faceted and interconnected nature of resilient cities was a theme continued at the conference by Mr Jordan Schwartz, Manager for Infrastructure Policy at the World Bank. He argued that a city’s success is a sum total of its networks. For example, the relationships between a city’s social economy, social cohesion, common geography and actual density enable savings in water, energy and transport networks. In turn, this enables services to add to cities’ resilience. The World Bank has identified reliable inner-city transport networks as driving density, which means less inefficient and unproductive urban sprawl, increasing property values, and also reducing urban crime and violence.

Mr Rhoda argued that a city’s resilience now sits alongside quality of life and workforce skill sets as a key determiner in whether the private sector invests. “Industrial and oil companies want to put their factories and facilities in cities that have resilient operations,” said Mr Rhoda. He argued that the importance of resilience to urban economies extends beyond building physical infrastructure, to “building the capacity of local people so that they have the skills of the future.”

The challenges that cities face cut across different functions, groups and agencies. They are interconnected, highly complex issues with multiple stakeholders who often have different perspectives on how and where to respond. At the Eisenhower Fellowships Conference, Peter Ho, Chairman of Singapore’s Urban Redevelopment Authority, argued that the need for cities to adopt a coordinated response is paramount, as the variations of citizens’ needs and demands grow.

Cities must provide for these changing needs. Japan is already facing what Mr Ho termed a ‘silver tsunami’, and the Asian Development Bank predicts that Asia will account for well over 60% of the global elderly population by 2050. Mr Ho said that an ageing population has second- and third-order consequences for various sectors, including healthcare, pensions, provisions and accessibility for the built environment.

An ageing population also throws up the spectre of a shrinking work force. Mr Ho identified some possible solutions that cities have or are adopting to counter this, such as increasing retirement age or filling gaps in the workforce with migrant workers. However, he argues that these solutions will have consequences down the road. For example, increasing the retirement age means creating jobs suitable for older workers which could potentially impact a city’s productivity. More elderly workers in the system could also limit the career progression of younger ones. Increased numbers of migrant workers would plug gaps in the work force, but it could also have an adverse impact on the city’s social cohesion and wage levels.

Policy makers need to be aware of entrenched assumptions that can lead to cognitive biases – where inertia or hesitation in recognising problems delays decision-making and results in crises and disasters. Mr Ho used the example of Singapore’s recent cases of flooding, where record rainfall overwhelmed the city-state’s storm drains, to illustrate the dangers of assumptions.

“The ability to re-orientate and create new value hinges on economic diversity and complexity.”

History is full of examples of how cities have – and failed to – respond to changing circumstances. Mr Ho highlighted the cases of Venice and Boston. While Venice, once the wealthiest city in Europe, failed to adequately respond to regional conflict, shifting centres of trade and the depredations of disease and fell into decline, Boston twice reinvented itself to adapt to market conditions.

In the late nineteenth century, with its previous significance as a port city much diminished, Boston transformed into an industrial centre of manufacturing on the back of its large pool of immigrant Irish labour. With American industry in decline by the 1950s, Boston again reinvented itself in the 1980s – this time as a high-tech service-based economy whose top four exports are all skills-based.

The example of Boston and Venice is a salient lesson in the importance of resilience. Quoting the economist Edward Glaeser, Mr Ho noted, “The ability to re-orientate and create new value hinges on economic diversity and complexity.” Cities must not assume that tomorrow will be like today; doing so risks being unprepared to face the challenges and opportunities of the future. O