Renewables on the rise

More cities are embracing renewable energy to reduce their greenhouse gas emissions, and some are even reaching for a loftier goal — operating entirely, or almost entirely, on clean electricity. We look at how some progressive cities are leaving fossil fuels behind to become sustainable cities. 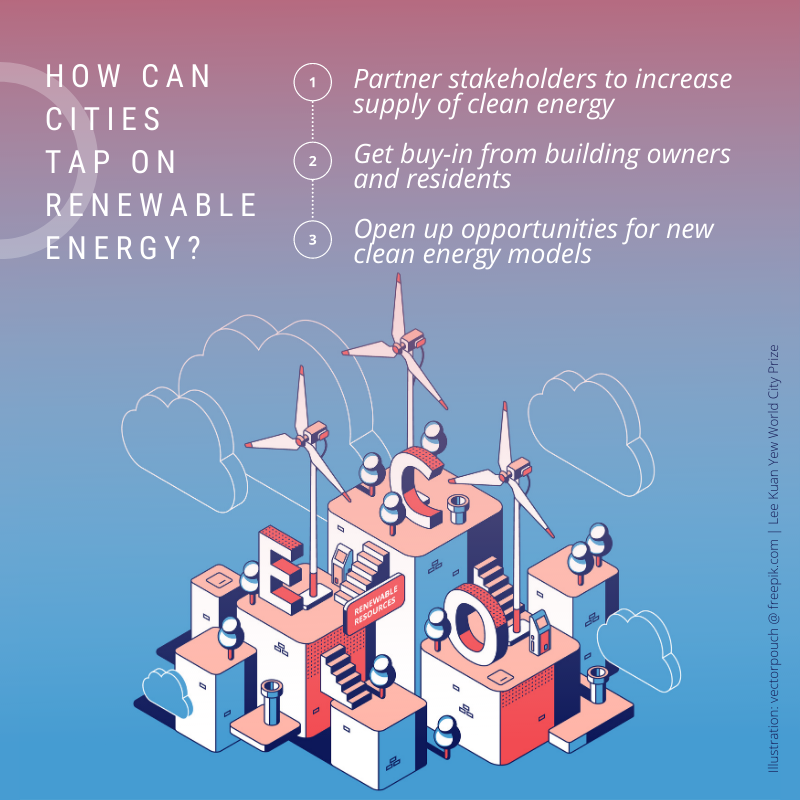 How can cities tap on renewable energy? © vectorpouch/ freepik.com, Additional text: Editor’s own

In 2020, Europeans received more electricity from renewable sources than fossil fuels for the first time, continuing the region’s trend of shifting its energy mix from coal and natural gas towards wind, solar and other clean power sources. With advances in renewable energy technologies and a growing sense of urgency in the fight against climate change, more cities are tapping more of the clean power, and some are even reaching for a once-unimaginable goal: operating entirely, or almost entirely, on it to reduce their greenhouse gas emissions.

Over 100 cities globally now use renewable energy for over 70 percent of their power needs, and many have pledged to use only such power for all of their electricity needs by 2050. In the United States alone, over 170 cities, including New York, Los Angeles, Cincinnati, St. Louis and Denver, have committed to replacing their coal and natural gas power with solar, wind, hydro and other renewable energy. More than 80 cities and towns in the United Kingdom have announced the same undertaking. In December 2020, India also directed its states to redevelop at least one city each to run solely on renewable energy, to act as exemplars and help the country meet its goal of getting at least 40 percent of its power from renewable sources by 2030.

Some cities have introduced innovative measures to increase their supply of clean power. In Australia, Melbourne pioneered a Melbourne Renewable Energy Project in 2017 that brings together large-scale energy users to combine their purchasing power to support the building of renewable energy facilities.

The first group, convened in 2017, consisted of 14 government agencies, universities, corporations and cultural institutions that agreed to buy 88 gigawatts of electricity annually from a proposed wind turbine farm located northwest of the city, enabling its construction. The second group, assembled in July 2020, spans seven universities, property firms and other organisations that will procure 110 gigawatts each year from several new wind farms. The two groups’ purchases will reduce the city’s emissions by five percent, and the city is working on curating more groups.

Amsterdam in the Netherlands, on the other hand, is collaborating with 28 municipalities on a Regional Energy Strategy that will boost their collective renewable energy capacity from 0.7 terawatts in 2018 to 2.7 terawatts by 2030 to serve their residents.

The municipalities have identified areas to house solar panels, wind turbines and other renewable energy technologies, and build installations that stretch across their boundaries, such as rows of panels or turbines along the major highways and railway lines that connect them. Under a draft plan released by the cities in April 2020 that is currently being refined, Amsterdam would contribute 663 gigawatts of renewable energy annually by 2030, up from its current capacity of about 116 gigawatts, with enough energy to meet 80 percent of its households’ needs.

In India, the government of New Delhi has forged a different kind of partnership. In January 2021, the government said that it will build solar panels on 225 acres (approximately 91 hectares) of agricultural land in villages near the capital, with the landowners’ consent. The panels will be installed at a height of at least 3.5 metres from the ground, so that the landowners can continue to farm the land with machinery such as tractors, and they will also be paid annually for the use of their land. The fee will start at one lakh (approximately USD $1,376) per acre and increase by six percent per year.

The capital said that the area can hold enough solar panels to generate 38 megawatts of power per year, and it will issue tenders for the panels’ installation by the end of 2021. Such dual use of crop farmland, called agricultural photovoltaics, or agrivoltaics, is also gaining popularity in Japan, the United States, and other countries. 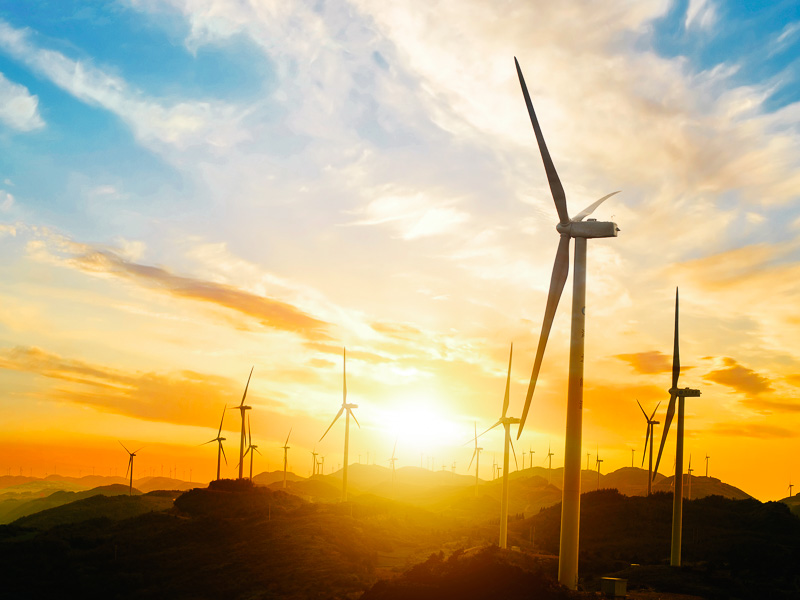 More cities are tapping on renewables such as energy from wind turbines © onlyyouqj/ freepik.com

As cities grow to accommodate more residents, more of them are also requiring buildings to pull their own weight in the energy equation. Buildings worldwide now make up nearly one-third of all energy use, and their consumption continues to increase, driven by their rising total floor area and greater use of air-conditioning and other energy-guzzling systems. In the United States, San Francisco has acted to curtail its buildings’ environmental footprint by mandating that large commercial properties with over 500,000 square feet of floor area use only renewable energy from 2022. The threshold will be lowered progressively from 2024 to encompass all commercial buildings with over 50,000 square feet of floor area by 2030.

Other cities have made it obligatory for various types of buildings to have technologies on their premises to generate renewable energy, both for the buildings’ own use and to add to the cities’ supply. Hamburg in Germany is one example, with its government passing a Climate Protection Act in December 2020 that compels all new buildings erected from 2023 to have rooftop solar panels. Baden-Württemberg, Germany’s third-largest state, has instituted a similar requirement for all new non-residential buildings constructed from 2022.

Some cities have set up their own power companies to negotiate better rates for renewable energy and to coax residents to use more of it. In 2018, Barcelona in Spain started Barcelona Energia, a public utility that distributes only renewable energy, to meet the city’s municipal electricity needs, including for streetlights, public housing and community facilities. The utility has since expanded its remit to supply 2,800 homes and firms in the city, as well as 35 other municipalities. The city estimates that establishing the utility cuts about EUR 1.3 million (approximately USD $1.6 million) annually from its electricity bill.

London in Britain, for its part, created its own clean energy company, called London Power, in January 2020 to offer residents more affordable renewable energy plans. Furthermore, any profits made by the utility are invested in the city’s social justice and environmental plans. In January 2021, at the one-year anniversary of the utility’s launch, the city said it had signed up 4,512 households, with the customers averting an average of 963 kilograms of emissions, and those on the cheapest plan saving an average of GBP 304 (approximately USD $424).

Cities aiming to accelerate their residents’ take-up of renewable energy can also learn from Boston in the United States. In February 2021, the city implemented an opt-out programme that automatically transferred residents and firms on the local utility’s fossil fuel-generated electricity plans onto plans that use more renewable energy. Mr Christopher Cook, Boston’s Chief of Environment, Energy and Open Space, explained the city’s thinking: “We don’t want people to leave the programme, but if they choose to do so for whatever reason, they can. But most people will probably choose to do nothing. Just by doing that, they are making us more sustainable.”

“Phasing out fossil fuels and transitioning to green economies is a monumental challenge, but the solutions exist, and we need to finance them, scale them up and accelerate them.”

The road ahead for renewables

As nascent technologies mature, they could open up other opportunities in renewable energy for cities too. Bangkok in Thailand and Osaka in Japan are among several Asian cities that have piloted peer-to-peer, blockchain-enabled renewable energy trading platforms in recent years, so that small-scale power generators, such as residents with solar panels on their homes, can sell their surplus electricity to neighbours or nearby buildings more quickly and easily.

The coastal city of Ulsan in South Korea is also testing the feasibility and economic viability of floating wind turbines that, unlike traditional offshore turbines, do not need fixed foundations that are anchored to the seabed. If successful, such floating turbines could be deployed in deeper waters, broadening the scope for wind energy installations.

In September 2021, the United Nations will host its first High Level Dialogue on Energy in 40 years, to urge the world to embrace renewable energy more rapidly. Mr Marcel Alers, its Head of Energy, noted that the energy sector is still the largest contributor to greenhouse gas emissions. He said: “Phasing out fossil fuels and transitioning to green economies is a monumental challenge, but the solutions exist, and we need to finance them, scale them up and accelerate them. Join us in making 2021 the year of global action for sustainable energy.” O