As cities adapt to life in the COVID-19 era, many are seizing the moment to implement consequential changes for a more resilient, sustainable and healthier future. In this second in a series of articles, we look at how city centres and suburbs could evolve as more companies embrace digitalisation and remote working. 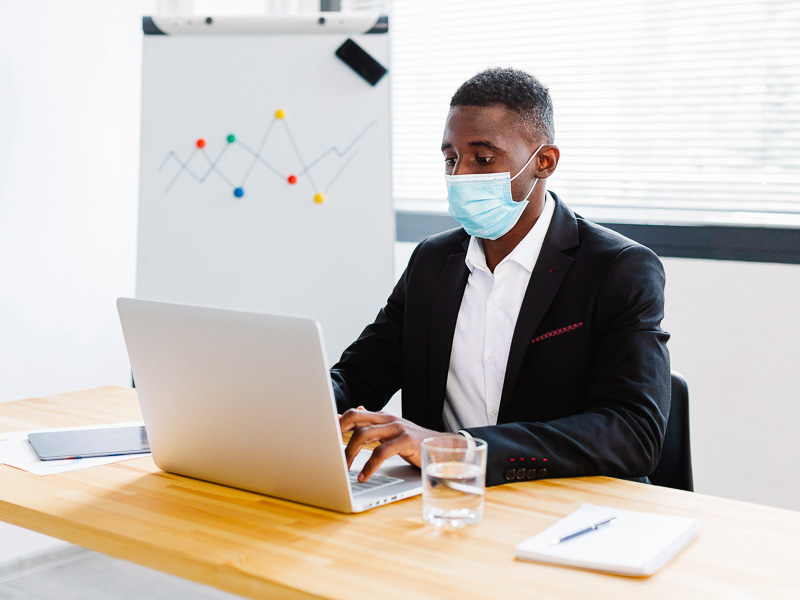 With remote working becoming the new normal, cities could rethink the way we work © diana.grytsku/ Freepik.com

The COVID-19 crisis is transforming the future of work and offices in many cities. Since the start of the pandemic, a growing number of firms around the world have unveiled plans to allow more employees to work from home regularly or permanently, leading to new sustainability benefits and urban planning opportunities.

When more people work from home, whether full-time or for part of the week, cities reduce commutes, road traffic and motor-related pollution and greenhouse gas emissions. When Travis County in the United States, which includes Austin, the capital of Texas, asked 2,300 of its 3,000 government employees who could work from home to do so temporarily from March 2020, for instance, it observed a 50 percent decrease in traffic in Austin’s major road intersections, and lower levels of nitrogen dioxide and ozone in the city’s air. With mostly positive feedback from the employees, the county is now developing a plan for them to permanently work from home for part of the week.

As firms embrace teleworking, they will also require less office space, unlocking new urban planning possibilities. In Japan, electronics giant Fujitsu, one of the country’s largest employers, said in July 2020 that it would halve its office space over the next three years and encourage its 80,000 employees to work remotely for part of the week. In Britain, banks, asset managers, insurers, accountancy and other firms are also adopting teleworking for the long term and rethinking their office leases, especially in the capital of London’s financial districts. A recent global survey of 315 chief executives by accounting firm KPMG found that 80 percent of them had accelerated their businesses’ digitalisation plans to support teleworking during and after the COVID-19 pandemic, and nearly 70 percent of them were planning to cut their office space, at least in the short term. Other surveys have reported similar findings.

As companies cut back on their office space, particularly in city centres where rents are high, and more people work from home, cities can not only reinvent their Central Business Districts (CBDs) but capitalise on their neighbourhoods’ larger daytime populations to create more vibrant districts. 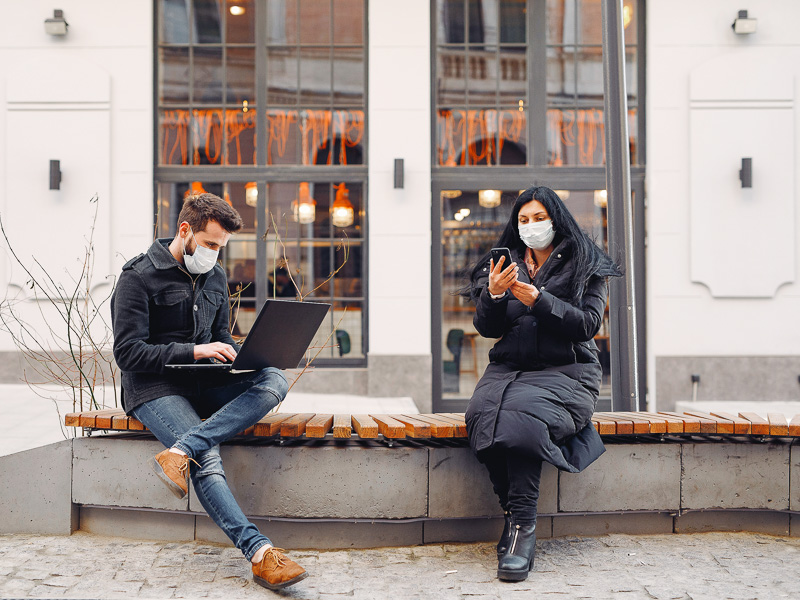 The aftermath of COVID-19 presents an opportunity for cities to diversify their CBDs © prostooleh/ Freepik.com

While CBDs have contributed to cities’ economies, they can be inefficient uses of space, with many becoming deserted on weekends and after office hours. As firms scale back or exit their offices in these districts, the time is ripe to convert more of them into mixed-use residential, commercial and cultural areas to maximise their liveliness throughout the week, said urban planning experts. “If daytime working populations fall, new populations are likely to be needed to keep these areas buzzing and generating income,” said Dr Tony Matthews, a senior lecturer in urban and environmental planning at Australia’s Griffith University, about the impact of the COVID-19 pandemic.

Even before the outbreak, cities have been trying to diversify their CBDs. In Singapore, for example, the government has been seeking to boost the number of homes and people who live in the CBD, including through a new ‘CBD Incentive Scheme’ introduced in 2019 that gives property developers a higher gross plot ratio – the total gross floor area permitted for a site – to spur the conversion of eligible office buildings into hotels and homes.

Under a new ‘City Centre Living Strategy’ discussed since 2016 and announced in June 2020, Glasgow in Scotland committed to doubling the resident population in the heart of the city to 40,000 people by 2035, partly by repurposing vacant floors in commercial buildings as homes. Ms Susan Aitken, Leader of the Glasgow City Council, said: “The strategy will build on the city centre’s strengths to create a place where more people want to live and visit and businesses to locate and invest, not just as we recover from the COVID crisis but for decades to come. The ultimate goal is a more liveable city centre capable of attracting a bigger, sustainable residential population.”

Over time, CBDs have become dominated by multinational companies, particularly those in the financial sector. If their presence is reduced by the COVID-19 crisis, the authorities could also inject more diversity into the districts by helping creative firms and start-ups, which are usually pushed to more affordable parts of cities, to set up offices in them through rent assistance, suggested Dr Mike Harris, a lecturer in landscape architecture and urban design at Australia’s University of New South Wales. This would be a good way to reverse gentrification, he added.

In September 2020, Perth in Australia announced a AUD $1.5 billion (approximately USD $1.1 billion) ‘City Deal’ to transform its CBD, including by relocating university campuses into the area and establishing two business hubs, for space-related start-ups, small companies and researchers, and Indigenous firms, entrepreneurs and jobseekers respectively. The city said that its plan would bring over 25,000 students and staff into the CBD and create almost 10,000 jobs. “The City Deal gives us a unique opportunity to collaborate with universities and local firms to help reenergise Perth, and will have positive flow-on effects for small businesses, including retail, restaurants and bars,” said Western Australia Premier Mark McGowan.

Sydney in Australia is also among the cities rethinking the possibilities of the CBD. As part of a new ’24-Hour Economy Strategy’ launched in September 2020, it plans to develop 24-hour hubs city-wide, including in its CBD, in the next few years by boosting and diversifying their nightlife. It will ensure that these areas have affordable offices for creative firms, support the use of underutilised buildings for live performances and cultural events, relax live music and noise regulations, and extend late-night public transport. “This will drive investment, create jobs and attract more businesses to the CBD and surrounding suburbs, laying the groundwork for our economic recovery,” said Mr Dominic Perrottet, Treasurer for New South Wales.

Cities could also require that office towers themselves serve a greater variety of industries and public-facing purposes. “Mixing offices with amenities such as event spaces, restaurants and gyms within commercial buildings would allow these sectors to complement rather than compete with one another,” said Mr Mat Triebner, who lectures in urban studies at the United States’ Yale University. “Bars could be placed at the rooftop to take advantage of views, and fitness spaces at the mezzanine or mid-level.” Such strategies have cut commercial vacancies in the city centres of Los Angeles and Detroit in the United States, and increased their housing by making them more attractive to developers.

“The shift to remote work has created the opportunity to remake cities, suburbs and entire metropolitan areas away from the industrial age model of separate zones for working, living and shopping.”

As teleworking takes root, cities can also adapt neighbourhoods to benefit from the boost in their daytime populations. “If office workers work remotely more often, the neighbourhoods where they work – their home neighbourhoods – will become more important. They may choose, for example, to work in their neighbourhood coffee shop. Even if they work at home, they’ll need to get out more during the workday, so public spaces, such as bars, restaurants, parks and trails, will become more important to daily life, not just after work or on the weekends,” noted Mr William Fulton, Director of the Kinder Institute of Urban Research at the United States’ Rice University.

Cities can also promote teleworking by setting aside flexible use spaces in residential areas for people who need office space temporarily. “People are asking themselves, why do I need to go into the office every day? At the same time, people don’t want to work remotely all the time. I can see a future where we have street-front, neighbourhood-centric spaces that are bookable by the minute, for people to have meetings, collaborate, or just get out of the house and into an office environment,” said Mr David Cairns, senior vice president of office leasing in global commercial real estate services firm CBRE.

In London’s Hackney borough, the council is converting underused garages and some municipal buildings into affordable workspaces for businesses. It has also put in place planning rules that require new commercial buildings to offer a proportion of units at rents that are less than half of market rates. The council said that spaces could be a lifeline for sectors hurt by the COVID-19 pandemic, particularly the creative, cultural, hospitality and retail sectors, and would help small businesses can thrive alongside larger ones in the longer term. “We want to ensure that Hackney’s growth is shaped by and meets the needs and ambitions of residents and local businesses,” said Hackney Councillor Guy Nicholson.

Dr Richard Florida, a professor of economic analysis and policy at the University of Toronto in Canada who specialises in urban planning, stressed that the decline in commercial real estate is a powerful resetting opportunity for cities to become more equitable. He said: “Cities could put in place policies and strategies to convert redundant office and retail space into affordable housing, for example by using tools like inclusionary zoning, which mandates that a certain percentage of housing built or converted is made available as affordable housing.”

“The shift to remote work has created the opportunity to remake cities, suburbs and entire metropolitan areas away from the industrial age model of separate zones for working, living and shopping,” he noted. “We can have neighbourhoods that have all the functions present, reducing commutes and taking huge numbers of cars off our streets and highways, and making our cities more affordable and inclusive.” O