Nurturing nutrition in the city

Cities are facing slowing progress on food security and nutrition, with the COVID-19 pandemic putting a balanced diet out of reach for many. To put healthy meals on people’s plates and build a stronger future, cities are expanding accessibility to fresh foods and their affordability. 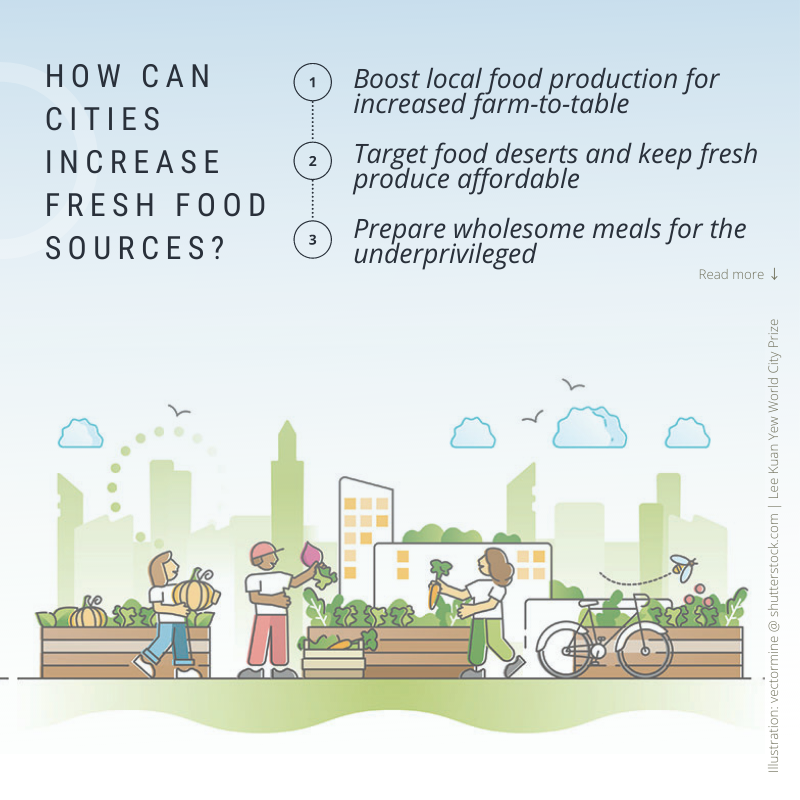 Even as cities aim to end hunger, many are facing an uphill battle to provide citizens with budget-friendly and nutritious food. In its latest report on the state of food security and nutrition in the world, the United Nations (UN) estimated that about two billion people already did not have regular access to safe, nutritious and sufficient food before the COVID-19 outbreak, and more people were going hungry each year since 2014. “There is no doubt that the pandemic will expose more people to food insecurity and accelerate the projected increase in the number of hungry people, unless immediate actions are taken,” it said.

Cities have also been sounding the alarm on ‘food deserts’ in their midst, defined as areas that are underserved by supermarkets and grocery stores with low-cost fresh meat and produce. In the United States, the government noted in 2015 that 39.4 million people, or nearly 13 percent of the population, lived in low-income, food desert areas. A 2018 study also found that nearly one in 10 of the United Kingdom’s most economically-deprived areas, including Everton in Liverpool and Hartcliffe in Bristol, are food deserts.

Researchers investigating food deserts have spelled out the consequences: residents are often forced to pay more to buy ingredients from nearby convenience stores with smaller selections, so they are more likely to rely on cheap but unhealthy fast food to fill their stomachs, and become overweight or obese.

Beyond the health concerns, cities’ quest to provide more fresh food has sustainability and security dimensions too. When residents eat more locally grown healthy food, cities can cut down on the transport and packaging associated with importing processed food, minimising their carbon footprint. Furthermore, long food supply chains are vulnerable to disruptions. By nurturing a large and steady supply of local food, cities can strengthen their food security.

“There is no doubt that the pandemic will expose more people to food insecurity and accelerate the projected increase in the number of hungry people, unless immediate actions are taken.”

As cities look for ways to boost their local food production, they can learn from successful strategies. After the collapse of the Argentinian economy in 2001 led to widespread poverty and hunger, Rosario, the country’s third largest city, passed an ordinance in 2002 to allow residents to grow crops on vacant public land, and to exempt landowners from paying tax on their unused sites if they let the government turn these into community agricultural plots for two years.

Since then, the city has also created seven ‘Vegetable Garden Parks’ for urban farming, all in low-income areas. It also provides technical assistance, seeds and tools. The converted sites and parks span 75 hectares, and produce 2,500 tonnes of fruits and vegetables every year. Beyond improving the city’s food supply, the urban farms have reduced the greenhouse gas emissions caused by the delivery of vegetables by 95 percent.

Seoul in South Korea, for its part, is creating vegetable gardens throughout the city by greening its densely-built infrastructure. In 2020, it produced nearly 53,000 square metres of such gardens by making use of vacant land expected to be unused for more than three years, buildings’ rooftops, sidewalks, and available land in 20 day care centres and 60 schools. It also distributed 29,000 box gardens for people to grow edible plants on their homes’ verandas and windowsills.

In October 2020, the city unveiled an even more ambitious plan to spend 251.4 billion won (approximately USD $222 million) from 2021 to 2024 to expand its urban farming space from 202 hectares to 240 hectares. The city will use the funds to convert more buildings’ rooftops and walls into vegetable plots, set up farming support centres in all 25 wards, and operate exchange programmes for urban farmers to learn from professionals in rural areas. The city wants to increase its number of urban farmers from 647,000 in 2019 to one million by 2024, to enhance its food supply and provide jobs to its growing ranks of retiring baby boomers. 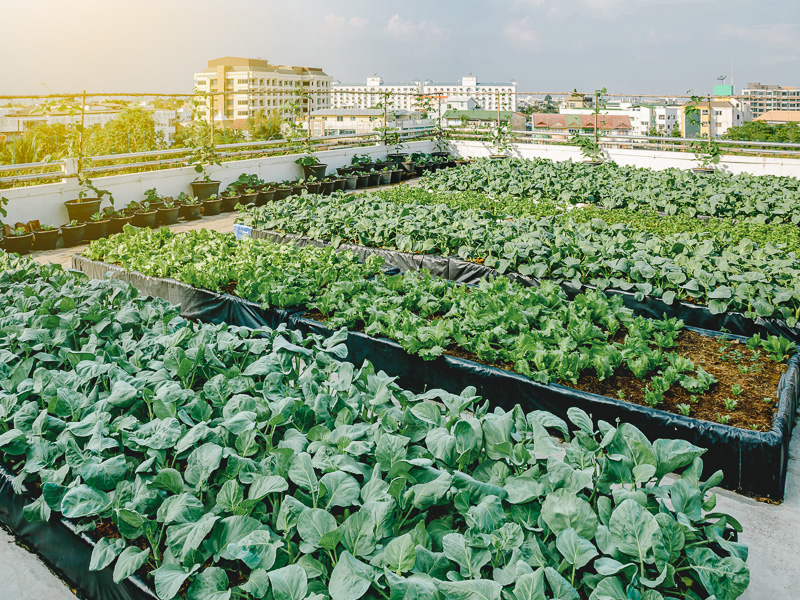 Bringing fresh produce to the people

In exchange for the benefits, the stores must have at least 5,000 square feet of space for food and non-food products for home cooking, at least 500 square feet for fresh produce, and devote at least 30 percent of their floor area to perishable goods, including fresh produce, meat and fish, dairy and frozen foods. The programme has added over 700,000 square feet of new and renovated supermarket space to the districts, and the city announced in March 2021 that it will expand the initiative to 11 more neighbourhoods to help the rising number of lower-income families caused by the pandemic.

Atlanta in the United States opens weekly pop-up grocery stands at five train stations in areas with low access to healthy food. The city buys and resells surplus produce from local community farms and food hubs to keep prices at the stands manageable for needy households, and goes further by halving the cost for low-income residents on its Supplemental Nutrition Assistance Programme. The city said that it chose to put up the stands at the train stations because the residents pass through them frequently. “The goal is simple: help get healthy, fresh food into places where people already are,” it said. In 2019, the stands served a customer base of 60,000 residents.

In Canada, Calgary and Edmonton have taken a different approach. In 2018, Calgary partnered with Fresh Routes, a not-for-profit social enterprise, to buy produce from vendors at cost or slightly above cost, and use a modified public bus as a mobile grocery store to sell the food at a markdown in low-income, food desert areas. After the collaboration’s success, Edmonton replicated it in 2019. The mobile stores supplied nearly 13,000 households in the two cities in 2020. With sales covering the cost of the produce, the deployments are financially sustainable and easily expandable. 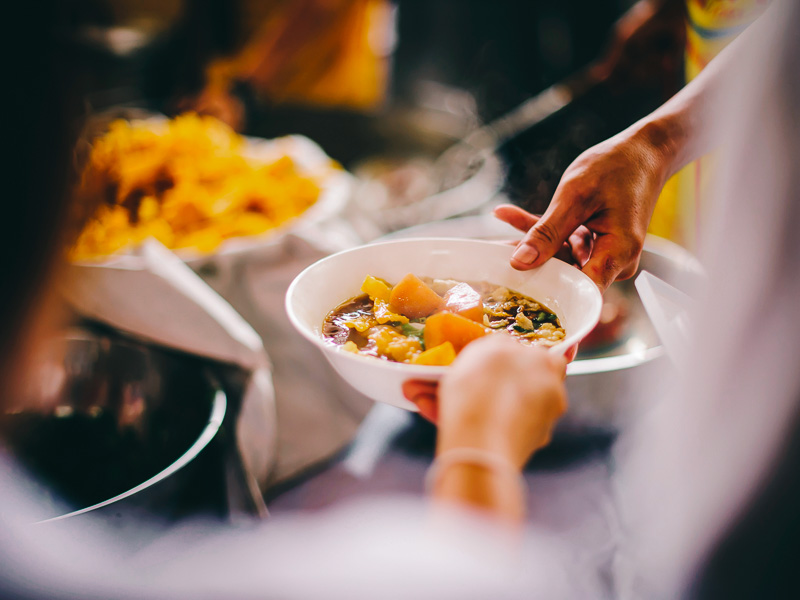 As cities strive to help their residents eat well, some are preparing wholesome meals for key demographics and curtailing access to unhealthy food. In 2000, La Paz in Bolivia started buying produce from local farmers to cook nutritious meals for the 140,000 children in its schools, after the previous practice of serving cheap chocolate, wafers and flavoured milk for breakfast led to health problems such as high rates of anaemia. The improved school meals, which include quinoa, wholegrains and fruit, slashed the incidence of anaemia from 37 percent to 7 percent, and continues to provide the farmers with a secure income stream.

Mexico City in Mexico, on the other hand, works with the private sector, civil societies and residents to operate more than 400 ‘community dining rooms’ in low-income areas that sell nourishing meals at 11 Mexican pesos (approximately USD $0.50) each.

The city provides the rooms, which are at public facilities, equipment for kitchens and ingredients. Firms donate money. The civil societies and resident volunteers cook and serve over 65,600 meals per day. When the programme was started in 2009, 15.5 percent of the city’s population was affected by food scarcity. By 2018, this had decreased to 5.6 percent. Most of the community dining rooms have remained open during the COVID-19 pandemic, with safe distancing measures and people encouraged to take the meals to go.

Manchester, Newcastle and other cities in Britain, for their part, have limited the number of hot food takeaways that are allowed to operate in residential neighbourhoods, since these typically sell greasy food. In Newcastle, such shops and stalls are banned within a 10-minute walk from the entrance of secondary schools, since the students may leave the premises for lunch. Exceptions are made for some shopping centres. Manchester prevents hot food takeaways from occupying more than one in 10 of shopping centres’ ground-floor units that face the street, and rejects permit applications that would create clusters of the shops.

In January 2021, the World Health Organisation (WHO) urged governments to do more to promote nutritious food. It noted that public settings, such as schools, childcare centres, nursing homes and hospitals, can play a key role in ensuring that people have access to healthy food. Dr Tedros Adhanom Ghebreyesus, WHO Director-General, said: “Public places that serve the entire community must be places where healthy diets are promoted. Now is the time for governments to lead by example, through ensuring that food served or sold in public settings contributes to healthy diets and saves lives.” O