As cities adapt to life in the COVID-19 era, many are seizing the moment to implement consequential changes for a more resilient, sustainable and healthier future. In this first in a series of articles, we look at how cities are repurposing streets to make room for businesses, cyclists and pedestrians, transform travel and reinvent neighbourhoods. 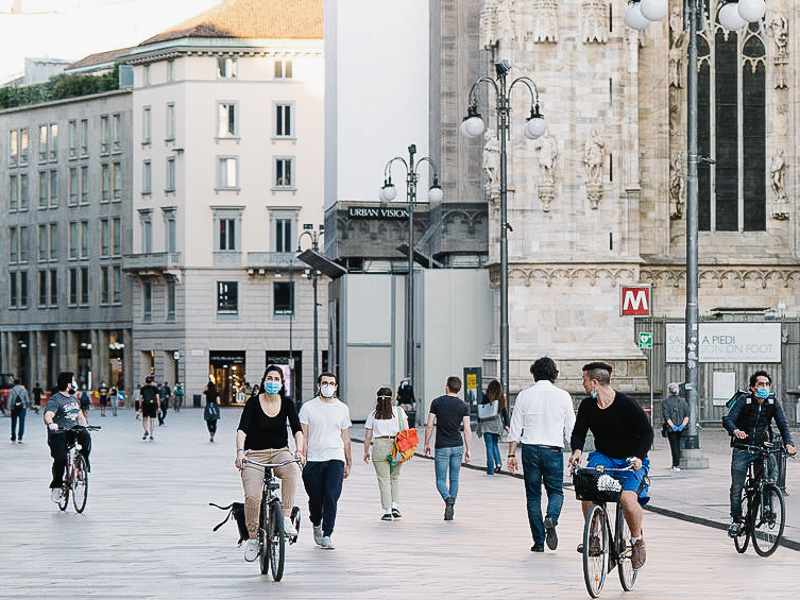 As the COVID-19 coronavirus spread in the United States earlier this year, the city of Seattle, like many others, asked residents to stay at home and venture out only to buy groceries and exercise. To help those with no parks near them, the city closed over 20 miles (approximately 32 kilometres) of roads in areas with low car ownership and limited open space to most vehicles, so that people could walk, cycle and exercise outdoors.

Although this ‘Stay Healthy Streets’ initiative was intended to be a temporary measure, the residents’ enthusiastic response convinced the city to make most of the closures permanent. Announcing the change in May 2020, the government said: “As we rebuild our city, we have the opportunity to build lasting, positive change towards a more liveable, safer city for all. Over the long term, these streets will become treasured assets in our neighbourhoods.”

Across the world, cities are adapting to the pressures of the pandemic and taking steps to protect their citizens’ health. The disruption caused by the coronavirus, however, has also given them a rare window to reinvent their land use. Nowhere is this more apparent than in the streets. Cities are introducing new plans and accelerating existing ones to repurpose their roads for a variety of uses, not only to satisfy the need for physical distancing but to lay the groundwork for a more resilient, sustainable and healthier future.

“As we rebuild our city, we have the opportunity to build lasting, positive change towards a more liveable, safer city for all.”

Like Seattle, Vancouver in Canada and Milan in Italy are altering roads to make room for residents. Under its ‘Making Streets for People’ plan, Vancouver has removed parking lots next to sidewalks and adapted curb lanes, which are the road lanes alongside pavements, so that businesses can set up or expand their outdoor seating areas, and customers can queue up farther apart from one another. These modifications will enable the shops to maintain their capacity while meeting the city’s physical distancing rules. The city has also lowered the speed limit for some streets to 30 kilometres per hour, and closed others to traffic entirely, for people to exercise outdoors safely.

The government said that some of these temporary conversions, which includes revamping at least 11 percent of road space throughout the city into people-focused public spaces, could be turned into permanent ones following feedback from residents, as the reallocation of road space aligns with its long-term goals to limit global warming and support cleaner air, make streets safer for walking, and increase social connections and healthier living.

Similarly, Milan is widening pedestrian paths and transforming 35 kilometres of streets into permanent cycling lanes between May and December 2020 to accommodate more active travel and improve access to parks and other public spaces. It is also pedestrianising some streets adjacent to these public spaces to increase their capacity. “In our ‘new normal’, it is necessary to rethink the way we use streets, especially in neighbourhoods with fewer green areas, to increase the available space for children to play and exercise and to encourage organisers to host events outdoors,” the city said.

For some cities, the retooling of streets is a crucial component in ambitious plans to reimagine neighbourhoods. By constructing and connecting cycling lanes, or restricting traffic on groups of streets to produce car-lite or car-free zones, cities are making it easier and safer for people to cycle or walk to shops and services in their vicinity while observing social distancing. This will increase footfall to local businesses, aiding in their recovery from the impact of COVID-19. In the longer term, such neighbourhoods will also benefit from less motor-related noise and air pollution, and help to foster stronger bonds within communities. 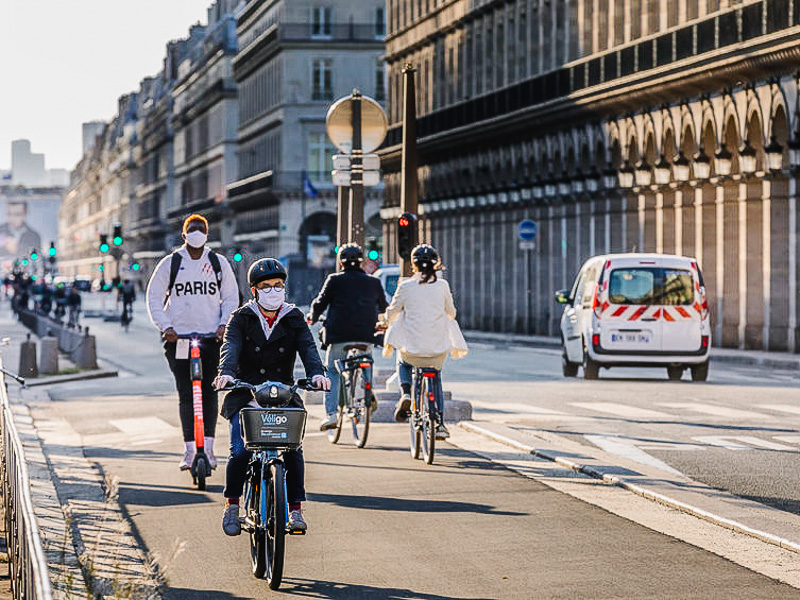 Since the pandemic started, Paris, France, has reserved 50 kilometres of lanes normally used by cars for bicycles. The Rue de Rivoli, which is the main east-west thoroughfare through the French capital, is now solely for cyclists and pedestrians, with only a few exceptions, such as for emergency vehicles, and this could become permanent. These new cycling corridors will contribute towards Paris Mayor Anne Hidalgo’s goal to have a bicycle lane on every street by 2024, which is essential to her far-reaching vision for Paris to become a ‘15-minute city’ – an urban planning concept where all residents can reach essential goods and services, including parks, schools, clinics, shops and their workplaces, within 15 minutes by walking or cycling.

The city of Montreal in Canada, for its part, has started limiting traffic on selected streets since June 2020 to create nine car-lite areas, with the goal of expanding the available space outdoors for their residents to walk and cycle at a safe distance from one another. The city added the arrangement, which could be retained permanently, has benefits beyond lowering the risk of COVID-19 infections: “It makes it easier for residents to wander freely and safely through the neighbourhoods, on foot and by bicycle, to take advantage of the parks, schools, services and businesses located within 500 metres of their home,”

In a similar bid to give pedestrians and cyclists more space, Madrid in Spain will trial a car-lite area within its central Salamanca or Retiro districts by the end of this year, by redirecting almost all road traffic within 12 adjacent blocks of buildings to their perimeter. Although residents who live within the car-lite zone will be allowed to drive in and out of it, their vehicular speed limit will be lowered to 10 kilometres per hour for pedestrians’ safety. If the pilot project is successful, the city will expand it to other neighbourhoods. Both Montreal and Madrid are taking inspiration from the Spanish capital of Barcelona’s ‘superblocks’, which divert cars and public transport to the perimeter of nine-block grids.

Other cities, including Portland in the United States and Melbourne in Australia, are enacting similar plans. In Portland, for example, the authorities are adding bicycle lanes to selected roads in some neighbourhoods so that nearly all residents and shops are within 500 feet (approximately 150 metres) of one of the lanes.

“We must invest in a sustainable, resilient and equitable recovery, not only to address the immediate COVID-19 pandemic, but to ensure that we are prepared for future shocks.”

Among the most comprehensive transformations of roads is the one taking place in London, Britain. In May 2020, the city unveiled a project called ‘London Streetspace’ to reshape its roads to handle a ten-fold increase in cycling and five-fold increase in walking.

London Mayor Sadiq Khan explained: “Our public transport’s capacity will be dramatically reduced post-coronavirus as a result of the huge challenges we face around social distancing. At the same time, many Londoners have rediscovered the joys of walking and cycling during our city’s lockdown. By quickly and cheaply widening pavements, developing temporary cycle lanes and closing roads to through traffic, we will enable millions more people to change the way they get around our city.”

The government said that the project’s scope, which includes constructing a walking, cycling and bus-only corridor along the major A10 Bishopsgate highway and converting 36 neighbourhoods into low-traffic ones, is unparalleled in a city of London’s size. It said: “Our work to create more opportunities for people to walk and cycle should help Londoners to lead safe and healthier lives overall, and help us to address our national climate change, air quality and health crises.” It is currently collecting feedback from residents, businesses, organisations and others on making many of the changes permanent.

More cities may be considering similarly wide-reaching plans. In July 2020, nearly 100 mayors worldwide belonging to C40 Cities, an international coalition of urban leaders, outlined in a report the key steps that would be needed for a green and just recovery from the pandemic. These included the prioritisation of walking and cycling options and the establishment of self-sufficient neighbourhoods.

The mayors noted: “We must invest in a sustainable, resilient and equitable recovery, not only to address the immediate COVID-19 pandemic, but to ensure that we are prepared for future shocks. We are at a pivotal point in our history, and have the chance, and the responsibility, to collectively create a new vision of a better future.” O