Occupying the vertical surfaces of offices, residential and commercial buildings, green walls provide greenery to the urban environment without the traditional requirements of space. Jane Henley, former Chief Executive Officer of the World Green Building Council, shares her views on green walls as well as their lesser known environmental benefits, and the upward trend of these living facades. 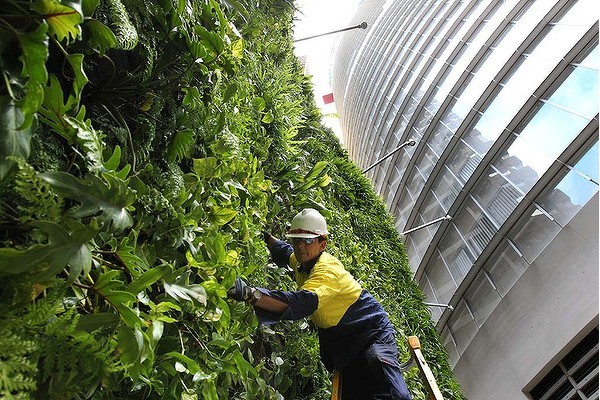 Maintenance of a vertical wall at 1 Bligh Street, Sydney, Australia

From the Hanging Gardens of Babylon in ancient times to the integrated hydroponics which feature in today’s high-tech vertical gardens, green walls have been with us for millennia.

In their simplest forms, green walls are simply part of a building covered with vegetation. Think ivy-covered castles and Roman loggias heavy with grape vines. However, modern green walls, or ‘living’ walls as they are sometimes known, support living vegetation which can improve a building’s energy efficiency and overall performance, and are gaining prominence as the global green building movement gathers speed.

External green walls are known to reduce the urban heat island effect while improving a building’s aesthetics. In warmer weather, green walls reduce the surface temperature of conventional walls, while shading windows with plants can reduce cooling demands by limiting solar gain in the summer while allowing daylight in during winter.

Internal green walls humidify and oxygenate the air and, depending on the plant species, can improve indoor air quality by acting as filters, trapping dust and absorbing harmful volatile organic compounds such as formaldehyde.

Decades of research into the efficacy of plants in the workplace has found they can improve employee morale, decrease absenteeism and increase worker efficiency. Washington State University found that productivity increased by as much as 12 percent when people performed tasks in a room with plants. More recent research at the University of Technology Sydney found that pots of indoor plants have the ability to cleanse many harmful chemicals from the air we breathe, decreasing carbon dioxide levels and increasing oxygen levels.

“Washington State University found that productivity increased by as much as 12 percent when people performed tasks in a room with plants.”

The property and construction sector is increasingly focused on making buildings better for the environment, but also for people. New building projects are factoring IEQ (indoor environmental quality) into their building designs – introducing lots of fresh air to circulate around the building, excluding toxic materials and introducing vertical greenery.

Take Green City Court in Prague, for instance, which was recently named a winner in the World Green Building Council’s inaugural Europe Region Leadership Awards. Taking out the ‘Leadership in Building Design and Performance’ category, Green City Court features a number of sustainable solutions never before seen in the Czech Republic, including an advanced lighting system, waterless urinals, and a naturally-ventilated atrium with a green wall. The spectacular atrium features a nine-metre-high olive tree and ivy-covered living wall on the ground floor. The atrium lets in the light, while the green wall makes it possible for building occupants to enjoy the benefits of greenery without occupying too much floor space.

Green wall systems range from pot plants arranged on layers of custom shelving to sophisticated vertical layers of growing medium, geotextiles and specially-constructed containers. Large or small plants can be used, depending on the size of the wall, and the result can be as manicured as a privet hedge or as wild as a rainforest. 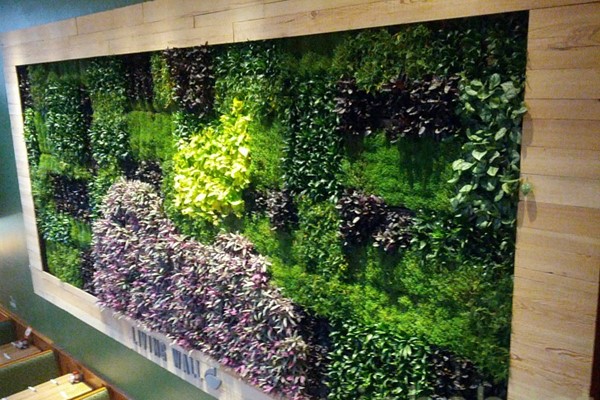 New York City’s first Leadership in Energy and Environmental Design (LEED) Gold Certified restaurant, Applebee’s in Harlem, features 40 environmentally-friendly upgrades, including a greenhouse on the roof, rainwater collection systems, and countertops and chandeliers made from renewable bamboo. The centrepiece, and a symbol of the restaurant’s green ethos, is the glorious green wall, which scrubs the air of toxins, acts as a noise barrier and insulates and cools the building.

In times gone by, espaliered pears, climbing roses or creeping ivy were common on buildings. Today, technological innovations have resulted in the development of new trellises, rigid panels and cable systems to support vines and plants as they reach skywards, all the while keeping them away from walls and other building surfaces.

At the Green Star-rated 1 Bligh Street skyscraper in Sydney, a 9.7-metre-high and 40-metre-long green wall dominates the façade. Watered by blackwater generated onsite, the green wall incorporates a system of pumps secreted in small cupboard rooms in the wall. The plants are wind and shade-tolerant and provide a uniformly green aesthetic. “Simplicity rather than celebration” was the architect’s vision – but people from around Sydney still come to sit by the wall and celebrate the lush corner of greenery in the middle of the bustling city.

Perhaps the most famous architect of green walls is Malaysian Ken Yeang, pioneer of ‘vertical green urbanism’. Yeang’s buildings include the Solaris in Singapore, which features an innovative 1.5-kilometre-long ‘vertical linear park’ that wraps itself around the tower’s façade and enhances the site’s biodiversity. The project was awarded with Singapore’s Green Mark Platinum rating.

Another project is the Spire Edge Tower in Haryana, India, currently under construction, and already rated LEED Platinum. The tower features green walls, green planter ramps with a pedestrian walkway, and a series of sky terraces. Yeang does more than simply place greenery in his built forms. Rather, he designs his buildings as total ‘living systems’, carefully selecting native species and establishing ‘biodiversity targets’ for these new ecosystems. 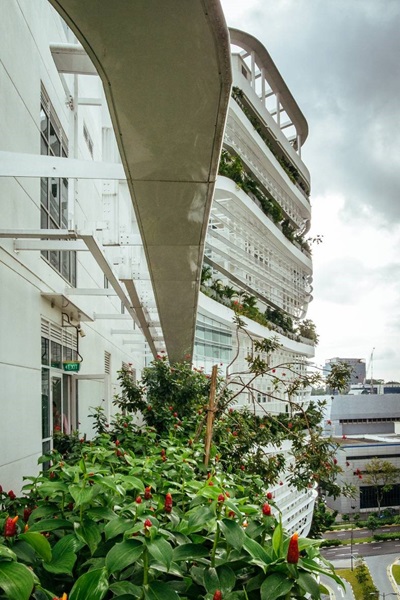 A linear park that spirals from the ground to the rooftop garden around Solaris, a building in Singapore designed by Ken Yeang © Urban Redevelopment Authority Singapore

Of course, green walls are not exclusively the domain of shiny new buildings – they can be retrofitted into existing buildings to reduce the heat load on façades. The simplest kind is a trellis which creates shade and passive cooling.

Some local councils are beginning to encourage green walls by providing planning advice. In the UK, Brighton & Hove City Council, in partnership with the charitable organisation Food Matters, is encouraging builders to incorporate measures to enable food growing in new developments, and some edible vertical gardens have emerged as a result. From residential aged care to student accommodation, developments in the region are now hubs of urban food-growing, with innovative features such as productive edible grape vines, fruit trees, and salads and herbs used as part of green walls.

The use of green walls to support biodiversity is currently being examined. Most studies have focused on green roofs in the urban environment and their ability to provide habitat for a wide range of animal and plant species. Plants, birds and insects have been known to thrive in some rooftop environments, and new research into the connection between green roofs and green walls may provide the push we need to embrace green walls for good. O