From trash to table

Nearly one billion tonnes of food go to waste each year, even as one in ten people suffer from hunger. More cities are taking a stand by banning supermarkets from throwing away food, incentivising donations, building infrastructure to help strangers share food and implementing other actions to prevent wastage. 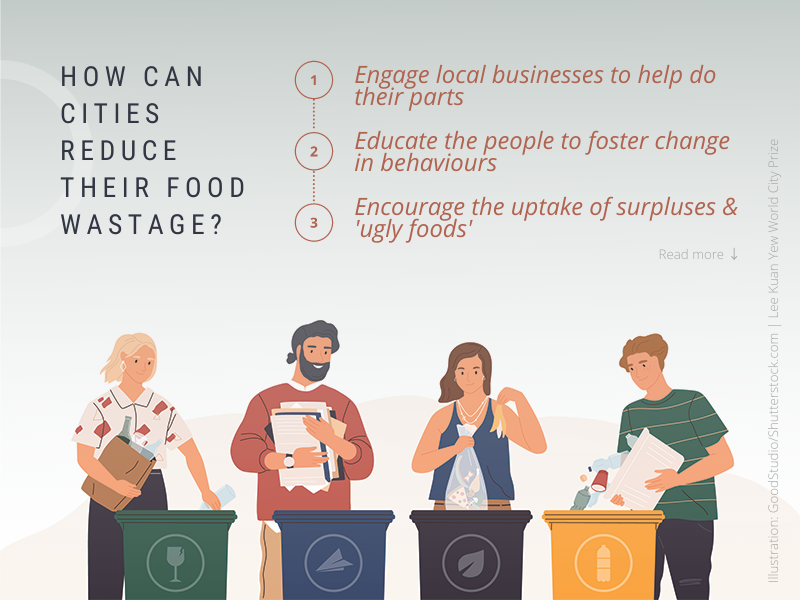 How can cities reduce their food wastage? © GoodStudio/ Shutterstock.com, additional text: Editor’s own

Hunger could be a thing of the past if the world wasted less food. In 2019 alone, households, eateries and retailers threw away 931 million tonnes of food, amounting to 17 percent of the food produced that year, the United Nations (UN) said in a March 2021 report. It noted that the COVID-19 pandemic has likely worsened the wastage, with food distributors stymied by closures in the hospitality industry, and people’s panic buying and stockpiling preventing supermarkets from donating to food banks, and probably resulting in more discarded food.

With nearly one in ten people worldwide suffering from hunger, such waste is unacceptable, the organisation said. It is also a significant cause of climate change, with the environmental toll of uneaten food estimated at about 4.4 gigatonnes of carbon dioxide equivalent annually, or about eight to ten percent of all greenhouse gas emissions.

“If food loss and waste were a country, it would be the third biggest source of greenhouse gas emissions. Food waste also burdens waste management systems and exacerbates food insecurity, making it a major contributor to the three planetary crises of climate change, nature and biodiversity loss, and pollution and waste,” said Ms Inger Andersen, Executive Director of the UN Environment Programme.

With cities slated to house 66 percent of the global population and consume over 80 percent of food by 2050, they must take the lead in minimising food waste and redirecting surpluses to people in need. Several cities have begun to do so in a variety of ways.

“If food loss and waste were a country, it would be the third biggest source of greenhouse gas emissions.”

Bringing businesses on board

Since 2016, cities in France have banned supermarkets from discarding food and deliberately spoiling it to stop people from foraging in their bins. The cities have also stipulated that those with over 400 squares metres of floor area must sign donation contracts with charities. These regulations are part of a law that the country passed to make better use of its food waste, which surpassed 7.1 million tonnes per year, and violations incur hefty fines and even jail terms. In 2019, the government noted that the law has been effective, with over 2,700 supermarkets diverting 46,000 tonnes of food each year from landfills, and donations to food banks up by more than 20 percent.

Milan in Italy, for its part, has opted for incentives. The city awards tax reductions to food businesses, including supermarkets, restaurants and corporate canteens, that donate food to food banks and charities. The initiative took effect in 2018, and rescued 660 tonnes of food in its first year.

In 2019, the city also started establishing a food waste hub in each district to collect and redistribute food more efficiently. The first hub saved 77 tonnes of food in its inaugural year, with the support of 21 non-profit groups, 11 supermarkets and five corporate canteens, and the city opened a second hub in early 2020. It is also progressively connecting its 418 school canteens to food banks, with the 106 canteens on board so far donating about 140 tonnes of fruit and bread per year.

In the United States, New York City developed a website to help businesses and organisations donate their surplus edible food more easily. After they specify the type of food they have to offer, an algorithm matches their donations to groups that can use or redistribute the food, starting with the closest first, so that handoffs can be made quickly. There is no minimum to what donors can give, so even a few pastries that would otherwise be discarded can be put to good use. The hyper-local matches also increase the likelihood of ongoing donations. After the website was launched in 2019, over 300 users signed up and diverted 4.5 tonnes of food within six months.

Making a difference with people 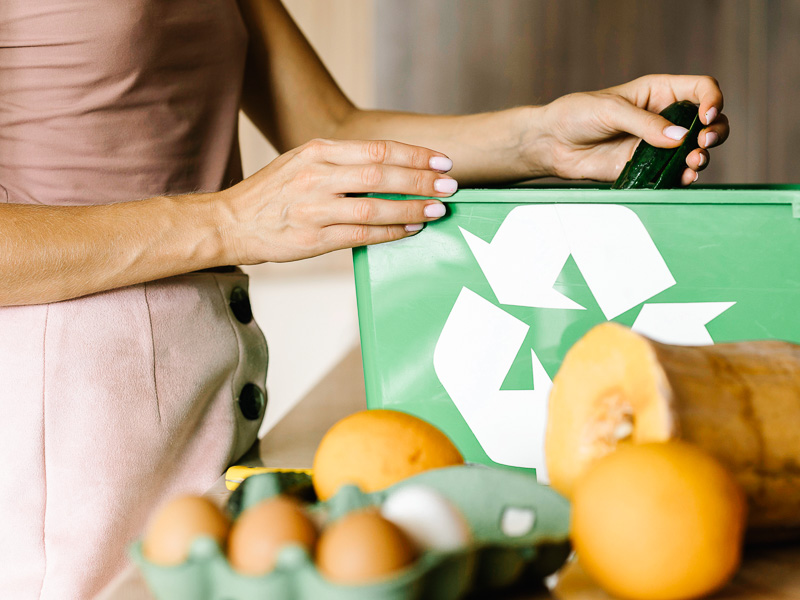 How can we curb wastefulness? © freepik.com

With households responsible for over half of the food that is thrown away, cities are taking steps to curb their wastefulness too. Since 2017, Brisbane in Australia has reduced household food waste by over 32 percent through a ‘Love Food Hate Waste’ campaign that shares tips on how to plan meals and shop thoughtfully to avoid waste, store food properly and make the most of leftovers.

The city also has a ‘Six Week Food Challenge’ that residents can take by following instructions on its website. This includes downloading a food waste diary to track the household’s waste during the first week, and then learning how to reduce the amount through easy actions in the subsequent weeks. The Brisbane City Council noted that the diary opens residents’ eyes to the scale of their waste: “Most people care about the amount of food that they waste, but significantly underestimate how much food goes into their bin. Food waste is the largest volume of avoidable material that goes into Brisbane’s landfill every year.”

Seoul, South Korea, cut its food waste by changing its waste collection system. In the past, residents paid a flat fee for waste disposal. To arrest the growing amount of food waste, the city started requiring households to separate their food waste from the rest of their rubbish, and to pay for the former by weight. To dispose of the waste, they have to buy bags from the government, and use radio frequency identification cards to open designated bins equipped with weighing scales. Within a year of the system’s implementation in 2013, domestic food waste fell by 14 percent.

Some cities also have ‘community fridges’, where residents can leave their spare food for those in need, in public spaces. In Britain, the environmental charity Hubbub Foundation has worked with the authorities in London, Cambridge and other cities to install 110 such fridges, which redistributed 2,000 tonnes of food to 150,000 people in 2020. Volunteer organisations register with the charity to set up and maintain the fridges, which receive food hygiene ratings from the local government. The charity is in the process of adding 60 fridges, and aims to have over 200 in place by the end of 2021. Shanghai in China and Okayama in Japan are among the other cities that have introduced such fridges.

The beauty of ugly food 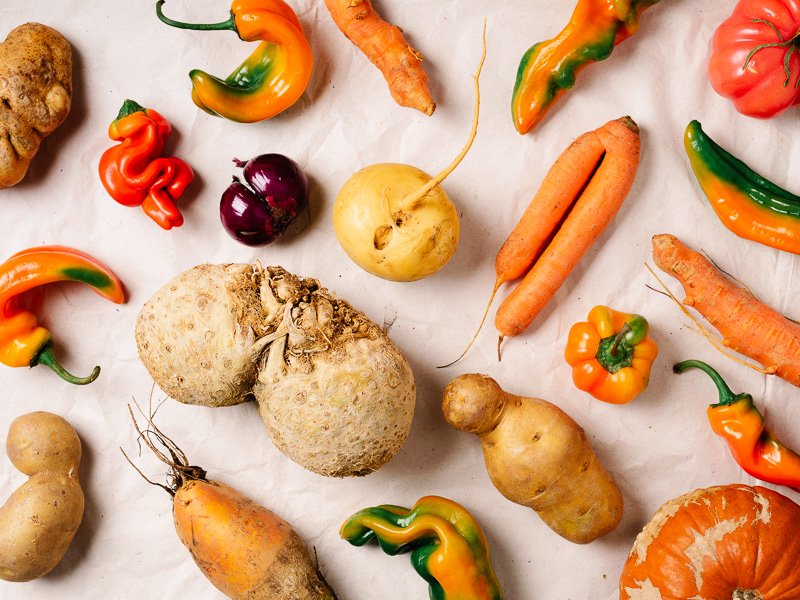 Some cities are shining a spotlight on ugly produce and other types of food that are often wasted. In Luxembourg City, the capital of Luxembourg, ‘social supermarkets’ sell surplus food, and food that is edible but rejected by grocers due to imperfections and other reasons, at steep discounts to needy residents. The city sources the food from bakeries, supermarkets, companies and others, and provides the residents with a card that gives them access to the stores, with large families and single-parent households having priority. Each recipient pays a token fee of two Euros (approximately 2.40 USD).

Copenhagen in Denmark and Berlin in Germany have also opened supermarkets that sell, at large markdowns, food products declined by conventional stores, such as those with incorrect labels or damaged packaging, food that is close to its expiry date or past it but still safe to consume, and misshapen fruits and vegetables.

With the ubiquity of smartphones, cities can also support the development of mobile apps to target specific food waste streams. In Toronto, Canada, restaurants use a ‘Feedback’ app that enables them to change food prices for deliveries and pick-ups throughout the day, with dishes becoming much cheaper in off-peak hours, for example between lunch and dinner, and close to closing time, to attract customers and reduce waste. Bangkok, Thailand, has a similar ‘Yindii’ app that connects consumers to restaurants, supermarkets and bakeries that are selling their excess food at discounted prices.

The UN said in its March 2021 report that previous estimates of food waste had significantly underestimated its scale, and called on cities and nations to do better. It said: “Food waste is a waste of resources, time and money. Food waste means all of the environmental impacts of food production, without any of the benefits of people being fed. With widespread food insecurity for many hundreds of millions of people around the globe, addressing food waste is critical to creating low-impact, healthy and resilient food systems.” O