Feeding the city – the growth of urban agriculture

Cities can provide significant amounts of vegetables and other crops to help feed the world as its population grows, according to a recent study. Many cities are already building rooftop farms, converting greenery into vegetable plots and encouraging residents to become part-time farmers through a variety of means. 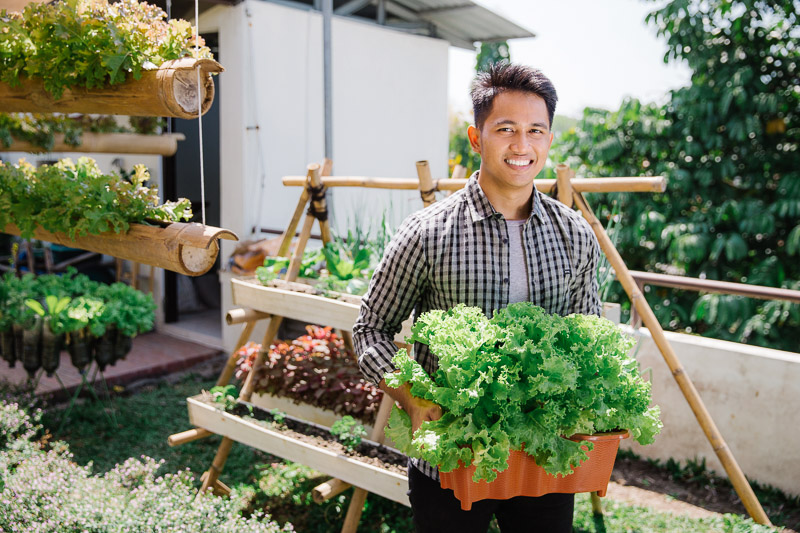 Man holding a bucket full of lettuce in front of his urban farm © ferli/ 123rf.com

By 2050, the world will need to produce up to 70 percent more food to feed about two billion more people, according to projections by the United Nations and scientists. While improving farming practices and minimising food waste are essential to meeting this challenge, growing more food in cities could also mean the difference between success and failure.

In a 2018 study, researchers in China and the United States found that vacant land, rooftops, parks and other spaces in cities worldwide could be used to cultivate up to 180 million tonnes of food annually, making up about 10 percent of the global output of legumes, roots, tubers and vegetables. By blanketing the cities with greenery, the agricultural plots could also reduce the urban heat island effect, cut the energy used for cooling by up to 15 billion kilowatt hours per year, and prevent up to 57 billion cubic metres of stormwater runoff to avert floods.

Dr Robert Costanza, Professor of Public Policy at the Australian National University and cofounder of the International Society for Ecological Economics, noted that the study underlined the global potential of urban agriculture. He said: “Urban agriculture alone will never feed the world, but it can vastly improve the natural capital in cities and produce a range of benefits beyond just food.” To reap its advantages, cities are converting spaces such as rooftops and roadside planting strips into vegetable plots, building indoor farms in former transportation tunnels and other disused facilities, and encouraging residents to participate in the growing movement through guidebooks and incentives. 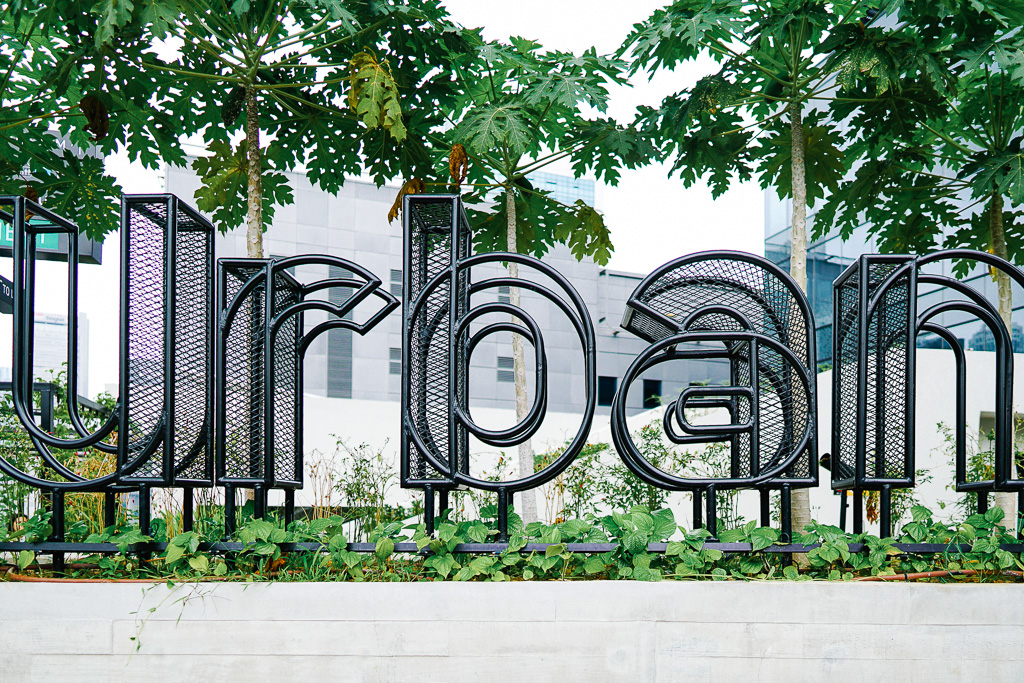 In land-scarce Singapore, the government is setting its sights on increasing the number of rooftop farms. In 2019, it worked with urban farming firm to construct a 1,800-square-metre farm on top of a multi-storey carpark and evaluate its productivity. The farm currently grows up to four tonnes of vegetables monthly which are sold in a nearby supermarket. With its success, the government will allow businesses to rent nine other publicly-owned carparks’ rooftop areas to farm vegetables and other crops. It also plans to lease more sites.

Apart from making space for the farms, the city also introduced grants and legislation to boost interest in them. In April 2020, it launched a SGD $30 million (approximately USD $21 million) fund to help local farmers of vegetables, fish and eggs ramp up production, including through investments in technology. Property developers, who have long been required to replace the greenery displaced by their projects, can also now install rooftop farms to meet the mandate.

Seattle in the United States, on the other hand, has encouraged residents to grow vegetables in the city’s ubiquitous planting strips. These are the small patches of greenery that are found between the sidewalk and the road in many cities. The city created a dedicated webpage to guide residents in adapting the planting strips in front of their homes into vegetable plots, and made the permit for such conversions free. Furthermore, it has published an online handbook, titled ‘Growing Food in the City’, to give homeowners tips on raising crops in their lawns and backyards. These include how to rotate crops to avoid exhausting the soil, and the best months to plant different species, such as lettuce, beans and potatoes.

Beyond rooftops and roadside planting strips, other spaces in a city could be ripe for urban agriculture too. In Tokyo, Japan, the authorities have utilised vacant spaces under elevated train tracks to propagate plants, including kale, endives and basil. The cultivated crops are sold to restaurants in the city. Owners of shopping centres and office towers have set aside units or even entire floors to grow vegetables which are harvested and served in their cafes and cafeterias. Official statistics show that the produce grown in Tokyo alone can feed at least 700,000 people, and the city also organised and hosted an inaugural Urban Agriculture World Summit in 2019 to learn from others.

“Urban agriculture alone will never feed the world, but it can vastly improve the natural capital in cities and produce a range of benefits beyond just food.”

From vacant lots to vegetable plots

As cities age, regeneration projects are another way to add more agricultural spaces. Since 2016, the government of Paris, France, has offered public land to agricultural firms under its ‘Parisculteurs’ project to increase the city’s greenery through redevelopment. The renovated Paris Expo Porte de Versailles Exhibition Centre, which is being opened in stages, will be the project’s biggest accomplishment to date, with a 14,000-square-metre rooftop farm slated to grow over 30 varieties of fruits and vegetables.

While the city aimed to green 100 hectares (one million square metres) by 2020, it has already exceeded the goal and achieved 116 hectares (1.16 million square metres) of new vegetation, with urban farms comprising about a third of that. “When the projects from Parisculteurs so far are at full production, they will produce 1,650 tonnes of fruits, vegetables, mushrooms and herbs, 1.2 million cut flowers and 1.3 million plants per year, as well as honey, saffron, edible flowers, hops and spirulina,” said Paris Deputy Mayor Penelope Komites, who is in charge of the city’s green spaces, biodiversity and urban agriculture.

Other cities have transformed their derelict underground spaces into highly productive indoor farms. Growing crops underground means that they do not have to be protected from heavy rain that could damage them. Underground spaces also naturally remain at stable temperatures that favour a range of species, eliminating the need for heating during colder months. Moreover, with artificial lights, crops can be cultivated in stacks and harvested throughout the year, significantly improving yields. While powering the lights will demand substantial electricity, tapping renewable energy could keep the farms sustainable.

In Britain, London and Liverpool have sited underground farms in various defunct facilities, including a former bomb shelter and its tunnels as well as the deep basements of industrial buildings that have been repurposed for other uses. In 2018, the South Korean government also gave the green light for an agriculture firm to grow leafy greens and strawberries in an abandoned, 600-metre-long highway tunnel south of Seoul. Stockholm in Sweden and New York City in the United States are other examples of cities that have invested in underground farms.

“Urban agriculture helps to make cities more resilient, not only by diversifying food sources and income opportunities, but by enhancing vegetation cover and water infiltration, and contributing to the sustainable management of water and natural resources.”

To foster greater interest in urban agriculture, cities are also setting up community gardens where residents can rent small plots called allotments, bond over farming and learn from one another. Quito, Ecuador has over 4,000 allotments in rooftop terraces and municipal gardens that collectively produce over 1,200 kilograms of food annually, and the city also organises monthly visits by experts to provide practical advice on growing crops as well as weekly markets where the residents can sell their harvests.

Vancouver, Canada, also has more than 110 community gardens in public parks, schoolyards and private properties, and is increasing the number of allotments in them from 4,423 in 2015 to 5,500 in 2020. Redeveloped sites that are more than 8,000 square metres in size or have a gross floor area of more than 45,000 square metres must also have at least three food assets, which can include gardening plots, farms and community kitchens. “Developers now frequently include a shared garden space for residents to connect over growing food together,” the government said.

In the Philippines, the national government is distributing free seed kits to households and working with local authorities to establish vegetable gardens in cities’ public areas, idle lands and schools. In the longer term, up to 15 percent of land in the Manila metropolitan area could be used for urban farming to strengthen the region’s food security. The government is also considering a bill that would require unoccupied public lots and buildings and available land in universities and colleges to be tapped for growing crops and raising livestock, and urban agriculture to be taught in secondary schools and tertiary institutions.

In the 2018 study, the authors noted that climate change could disrupt traditional farms and food supply chains, adding to the urgency of boosting urban agriculture. As the United Nations has said: “Urban agriculture helps to make cities more resilient, not only by diversifying food sources and income opportunities, but by enhancing vegetation cover and water infiltration, and contributing to the sustainable management of water and natural resources. A green city is a healthy city, and a healthy city is a happy city.” O