Eco-cities — who, what, where and why?

The term ‘eco-cities’ is synonymous with urban areas that promote environmental preservation. However, decorating cities with boulevards and green buildings, and adopting energy- and waste-efficient technologies, are merely small parts of the modern eco-city. What do eco-cities need in order to function successfully? 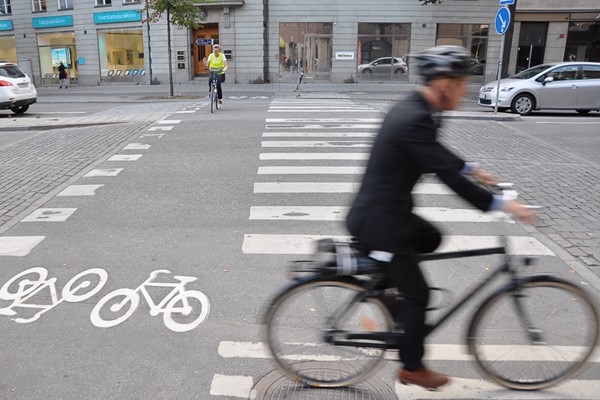 One of the principles of eco-cities is a modal shift of private car usage to public transportation. Promoting cycling for short-distance trips can help to encourage that shift © Dylan Passmore

The concept of making cities environmentally sustainable is nothing new. In Europe and the United States, the Garden City movement of the 1890s and the post-World War II New Town phenomenon were based on the idea of creating urban areas that merged contemporary and spacious housing with modern infrastructure and greenery. Both were seen as attempts to reinvent the city in the post-industrial era.

The term ‘eco-city’ surfaced in the 1970s, when a US-based movement known as Urban Ecology first used it. Founded in California, the group launched the journal, The Urban Ecologist. “An eco-city is an ecologically healthy city. That also means the city design is strongly informed by knowledge of ecology and its design principles,” stated Richard Register, the publication’s launch editor and person attributed with creating the term, in an interview with environmental magazine Treehugger.

However, many claim the term today depicts a city that adheres to the three core pillars of sustainability: environmental stewardship, social equality and economic prosperity. Flemming Borreskov, President of Catalytic Society and member of the Lee Kuan Yew World City Prize Council, is one such urbanist and he acknowledges the concept of the eco-city has progressed much over the last few decades.

“Today we know much more about designing and building eco-cities than we did in the 1990s. At that time sustainability was more or less about being environmentally sustainable. Today, however, sustainability is much more recognised and mainstream,” Borreskov explains.

“An eco-city is an ecologically healthy city. That also means the city design is strongly informed by knowledge of ecology and its design principles.”

“We have come to recognise that sustainability has three dimensions: environment and resources; social and cultural cohesion; and economic and financial dimension. We have also realised that we should aim for creating cities for people – cities that are designed and built for the human scale and are vibrant,” he adds.

Eco-cities come in all shapes and sizes. Research conducted in 2011 by the International Eco-Cities Initiative claims there are more than 170 such places globally, with this number set to rise over the next decade. Furthermore, the size, scale and types of eco-cities vary widely. In the developing world, for instance, purpose-built eco-cities are being built at breakneck pace, whereas in the West, urban regeneration is more common.

The urbanist names the IBA Hamburg project in Germany and Masdar City in the UAE. He says the former exemplifies a hybrid model that mixes retrofitting with building on new land, while the latter demonstrates the ability to build a sustainable city in a harsh desert climate.

It is widely accepted among urbanists that in order to be referred to as an eco-city, cities must embrace the three core pillars of sustainability.

However, behind these principals, a host of other factors influence the modern eco-city. Affordability and demand on the parts of the general public and government policymakers are two notable factors, as are energy- and resource-efficiency and land conservation.

“People want eco-cities only if they can choose freely and can afford to pay for them. Wise politicians and business people listen to their constituents and clientele, and strive to deliver what the people want. As energy prices go up eco-cities will become more competitive. In addition, land scarcity is also driving up prices on building rights, making the densification process unavoidable,” says Borreskov.

“Eco-cities have to focus more on economic sustainability in the light of today’s economic glut. We have to do more with fewer financial means.”

There are seemingly countless facets to facilitating the modern eco-city. These range from manpower, to planning and government policies. Investment from both the public and private sectors is arguably the most important requirement, as without the capital to either retrofit or build a city from scratch any such plan remains just that – a plan.

In the developed world, private-public partnerships (PPPs), where governments back a project that is supported by corporations, are common. In the developing world, this model of financing is often not as attractive to investors, due to regulatory and performance risks.

“The public-private partnership is a fairly new model for financing municipal affairs [in China], combining the advantages of top-down guidance and bottom-up innovation,” remarks Dr Qiu Baoxing, then-Vice Minister of the Ministry of Housing and Urban-Rural Development, People’s Republic of China.

“However, with legal uncertainties and constraints that result from this, it is still premature to promote PPPs as a means of financing sustainable cities,” Qiu adds. The then-Vice Minister believes the Build-Operate-Transfer (BOT) model, where the private sector provides the upfront capital and investment for a concession and which over time hands the project over to the public sector, to be a more suitable financing model.

To make eco-cities a safe investment, governments must ensure they are economically viable, as both the public and private sectors are today more stringent regarding capital expenditure than they have been in past decades.

“Eco-cities have to focus more on economic sustainability in the light of today’s economic glut, just as everyone else has to, whether we are talking about businesses or city-governments, or national governments for that matter. We have to do more with fewer financial means. It is not going to be easy, but it is imperative that we continuously work on this dimension as well,” argues Borreskov.

Technology is another key enabler of the present-day eco-city. Indeed, it is through technological development that cities are able to become more energy-and resource-efficient; to set up transportation systems and networks that move people and goods from one destination to another more quickly, using less fuel; to design and construct buildings and public areas that are socially, environmentally and economically viable; and which allow businesses and residents to go about their daily activities in a more efficient manner.

“Smart-city technology has helped spur the development of today’s eco-cities. It is much more than just the advent of the Internet. The smart-city concept is about management of traffic, electricity, water, sewage, waste and many other things. We have only seen the tip of the iceberg. Over the next 10 to 20 years this is going to revolutionise our way of designing and managing cities,” remarks Borreskov.

“The biggest challenge confronting the development of today’s eco-cities is the human mind. Human beings tend to want what we have seen and what we know, and we have difficulty buying into something new and unknown.”

Public acceptance of eco-cities is paramount to their future success, as it is people that must live and work in these places. Listening to the needs of residents and the business community is thus a key prerequisite to any eco-city venture. Furthermore, developers must also be wary that opinions change and living expectations continuously rise.

In failing to meet the requirements of those that live and work in eco-cities, their administrators increase the risk of economic, social and environmental degradation – the very attributes the eco-city is designed to counter.

Educating both the public and potential investors about the benefits of eco-cities is difficult admits Borreskov. “The biggest challenge confronting the development of today’s eco-cities is the human mind. Human beings tend to want what we have seen and what we know, and we have difficulty buying into something new and unknown,” he claims.

“When people talk about the challenges confronting today’s cities, developers and planners must demonstrate how the eco-city will benefit people,” says Borreskov. “Without this fundamental approach it is almost impossible for people to imagine what it will be like to live and work in an eco-city.”

The concept of the eco-city has progressed much since its inception in the 1970s. It has moved from being an urban area characterised by environmentally friendly attributes, to one that also promotes social and economic uplift.

Despite their proliferation, the make-up and characteristics of eco-cities differ widely. Indeed, it could be argued that no two eco-cities are the same, when considering traits like geographical topology and climate. The majority of eco-cities in the West are retrofits that are designed to rejuvenate century-old dwellings that have experienced economic degradation. Conversely, a large number of purpose-built projects can be found in the developing world, where suitable land is less scarce and where the need to ‘start from scratch’ is more pressing. Furthermore, the size and scale of projects vary significantly, irrespective of where they are located.

Regardless of where an eco-city is located, its success is subject to non-urban factors. Principal among these are financing, technological advancements, public buy-in and robust governance.

Yet arguably the most significant aspect of eco-cities is their growth potential. Eco-cities could play in the role of helping combat the impact and stresses of urban – and therefore global – population growth and climate change.

The world’s population is set to reach 9.7 billion by 2050 – up from 7.2 billion in 2012. That global population will be a vastly urban one. According to World Atlas, eco-cities today account for around only 4 percent of the world’s more than 4,400 cities with a population of more than 150,000. The opportunity for eco-cities to play a greater role in housing residents and businesses is immense.

The development of eco-cities will go far in curbing climate change, which is predicted to reach catastrophic levels in 30 years’ time, unless emissions are dramatically cut between now and then. Eco-cities are a proven means of reducing urban pollutants across multiple sectors. There has never been a more pressing time for governments and the private sector to invest in them. O