The sharp increase in e-commerce is posing a dilemma to cities: how to encourage such trade while preventing the traffic congestion caused by delivery vehicles. To achieve the twin goals, cities are experimenting with a range of infrastructural and legislative solutions, from mini-depots and self-pick-up points, to reservation systems for curb-side parking. 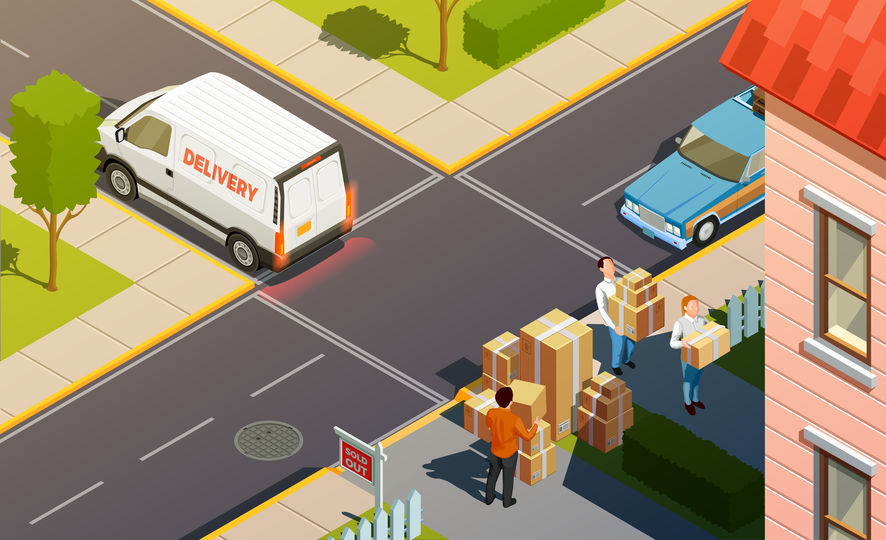 For online shoppers, buying a product may be as simple as clicking on a few buttons on a website and waiting for the delivery. For cities, however, coping with the traffic problems caused by e-commerce deliveries has become a complex issue in need of innovative solutions. In China, the number of express delivery parcels soared from nine billion in 2013 to more than 60 billion in 2019, with the figure expected to keep growing as more citizens join the middle class. In the United States, the urban traffic related to e-commerce doubled between 2009 and 2018, and is slated to double again within five years, by 2023.

In a recent report, the World Economic Forum (WEF) outlined the potential consequences of the continued e-commerce boom for cities. The number of delivery vehicles in the 100 most populous cities could increase by 36 percent between 2019 and 2030, leading to significantly more traffic congestion and air pollution. Although e-commerce could reduce the number of trips that people make to physical stores, delivery vans and trucks are more likely to block other vehicles and cause gridlock as they make multiple stops in dense urban areas and idle on streets while their drivers hand over packages.

To reap the benefits of e-commerce while averting the problems caused by e-commerce deliveries, cities are experimenting with a range of infrastructural and legislative solutions. The following are some of the successful measures that have been implemented in cities ranging from Singapore to Sydney, and Shanghai to Seattle. 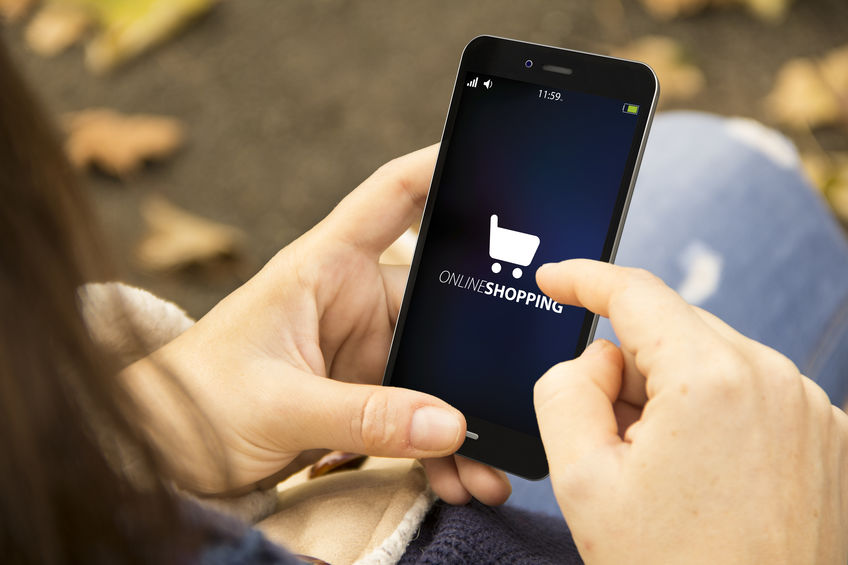 For several cities, setting up centralised delivery and collection points for parcels has been key to preventing traffic bottlenecks. In Seattle in the US, researchers at the University of Washington’s Urban Freight Lab found that delivery vans and trucks were spending 60 percent of their delivery time at the curb while their drivers searched for specific offices and apartments in high-rise buildings. In 2018, the researchers trialled a locker system at a downtown office building, slashing the vehicles’ average parking time outside the building from 27 minutes to six minutes. The city’s government is now working with the researchers to install more of the lockers, including at transport hubs.

Other cities have invested in parcel lockers too. In November 2019, PostNord, which operates Denmark’s postal service, announced that it would partner with another firm to roll out 2,000 lockers nationwide within six months, starting with the cities of Copenhagen and Aarhus, and with the eventual goal of having 10,000 lockers. In Japan, the government has subsidised companies’ cost of installing lockers at train stations and convenience stores.

Other cities have built depots on the fringes of busy areas to consolidate packages and deliver them the rest of the way on foot or via smaller vehicles such as cargo bicycles. Since 2016, the government of Sydney in Australia has operated such a depot out of a car park located near the city’s Central Business District (CBD). This has shortened the distance that delivery vans travel within the CBD by about 26,000 kilometres per year and decreased the amount of time that the vehicles spend in the area’s loading zones by about 4,600 hours annually.

A similar project in Berlin, Germany, achieved equally impressive results. In a year-long, government-funded trial that ended in May 2019, the nation’s five largest parcel service firms used electric-powered cargo bicycles to deliver packages within the Prenzlauer Berg district from a centrally-located depot. “Our experience showed that the bicycles can be as efficient as conventional vans,” said Mr Gerd Seber, Group Manager of Sustainability and Innovation at DPD Germany, one of the firms. He noted that while the bicycles have a smaller carrying capacity, their riders can navigate traffic more easily and do not have to look for parking spaces. Their use also averted 11 tonnes of greenhouse gas emissions during the trial. The government is in talks to establish permanent depots throughout the city to institutionalise this mode of parcel delivery.

“There has never been a time of greater change for ‘last-mile’ delivery. Consumers are ordering more things online and expecting more control and faster deliveries. Cities are struggling with traffic congestion and air pollution. Without a doubt, there is an urgent need for action, and effective interventions must be put in place.”

For cities without the space or resources to make infrastructural changes, policy ones may help too. In New York City (NYC) in the US, the rise of e-commerce has brought chaos to the streets, with more than 1.5 million packages delivered daily. Delivery trucks now routinely double-park on roads, blocking bus and bicycle lanes. In 2018, the vehicles racked up more than 471,000 parking violations, a 34 percent increase from 2013.

To arrest the problem, the government introduced a pilot programme in 2019 to turn some residential roadside parking spaces into temporary loading and unloading zones. Private cars are not allowed to park in these spaces during weekdays from 7 am to 7 pm, when most residents are at work, to free them up for delivery vehicles and taxis. “These zones will more efficiently utilise curb space and reduce the number of double-parked cars,” said NYC Department of Transportation spokeswoman Alana Morales.

Many cities, including NYC, Stockholm in Sweden, Paris in France and Barcelona in Spain, are also encouraging or requiring businesses with late-night operating hours to take delivery of their goods at night, to ease traffic congestion during the day. In NYC, about 500 companies, including grocery stores and pharmacies, now accept deliveries between 7 pm and 6 am under a city-administered programme, and the government is aiming to enlist 400 more businesses. In Paris, large freight trucks are banned from entering the city during the day, and instead do so at night to deliver packages to small warehouses located near homes. Similar restrictions are in place in Seoul in South Korea and Manila in the Philippines.

Implementing curb-space reservations has also worked wonders for some cities. In a three-month trial in late 2019, Washington, DC, in the US required taxi and delivery companies to use an app to reserve time slots to pick up and drop off passengers and packages at specific places. On-demand delivery services such as Uber Eats, followed by freight and parcel delivery companies, were the most frequent users of the app. “We saw that the drivers were able to save time from not having to circle the block multiple times to find a (parking) space”, improving traffic flow as well, said the city’s Department of Transportation Director Jeff Marootian. Double-parking in the selected areas and nearby streets also fell by 64 percent. 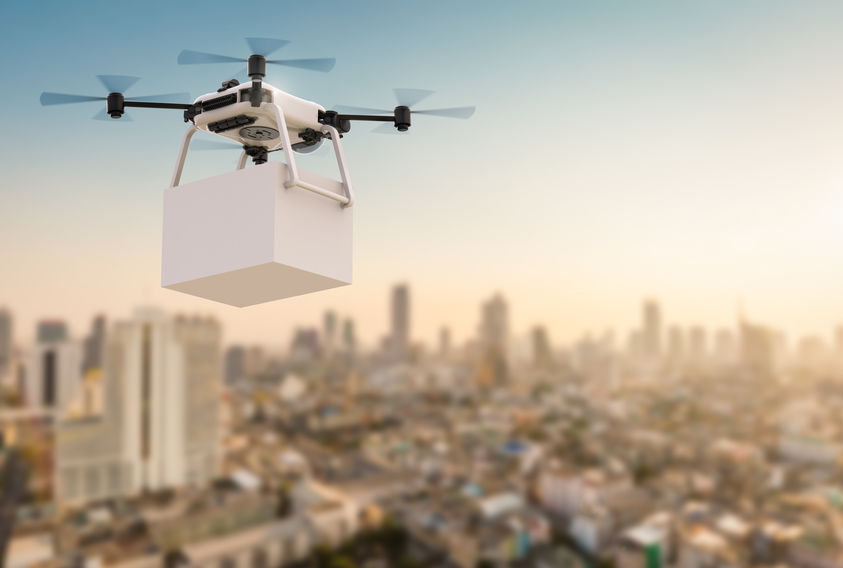 Could drones be the future of small goods delivery? © Kittipong Jirasukhanont/ 123rf.com

Into the air and under the ground

Advances in technology will open up new modes of delivery for cities. Many countries are already experimenting with using drones for deliveries. Reykjavik, the capital of Iceland, has allowed the company behind the country’s largest native online marketplace to deliver packages via drone since 2017. The partnership, which began with one tightly-prescribed path for the drones, now spans 13 routes with detours of up to 700 metres permitted, effectively covering half of the city. Drone delivery trials are underway in more than 20 countries, including Germany, Britain and Indonesia.

A literally groundbreaking project in Xiong’An, China, offers another vision for the future of e-commerce deliveries. By 2022, the city will complete an underground loop delivery system that connects sites such as logistics centres, supermarkets, warehouses, industrial parks and other commercial buildings. Parcels and goods will be transported in autonomous, magnetic-suspension capsule cars, keeping the deliveries off above-ground roads. Shanghai, the largest city in China, is researching ways to shift parcel delivery underground too.

“It is realisable and essential for China to develop such underground transport systems due to the huge number of online shopping parcels being delivered every year,” said Mr Qian Qihu, one of the country’s top experts in underground development. “Major Chinese cities like Shanghai have developed complicated underground subway systems. An underground logistics system will be far easier than that.”

The WEF said in its report that cities must take decisive action, and soon, to manage the growing impact of e-commerce deliveries. It noted: “There has never been a time of greater change for ‘last-mile’ delivery. Consumers are ordering more things online and expecting more control and faster deliveries. Cities are struggling with traffic congestion and air pollution. Without a doubt, there is an urgent need for action, and effective interventions must be put in place.” O