What is biophilia and how can this concept be incorporated into urban design and city planning? Three international urban experts share their thoughts on the principles of biophilic design and why forging a connection to nature is expected to become a significant concern for cities to create a more liveable and healthier environment. 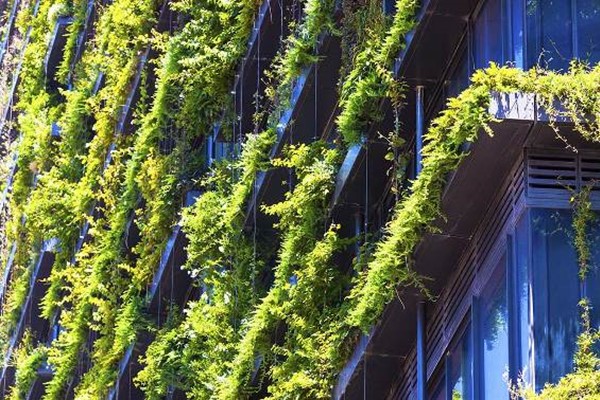 A vertical green façade on a building

On 14 December 2012, a gunman murdered 26 children and teachers at Sandy Hook Elementary School in Newtown, Connecticut, USA. In the aftermath of this ‘terrible tragedy’, the town sought to reconstruct the entire school in a way that would help the community to rebuild their lives. “The old school building was a very alienating construction,” recalled Professor Stephen R. Kellert, Tweedy Ordy Professor Emeritus of Social Ecology at Yale University, whom the town engaged as a consultant to redesign the school by taking inspiration from nature.

Kellert added that the school was located “ironically, on a beautiful 7-acre wetlands site”. Working together with the architects, he tapped on this existing feature to design a facility that offers students and staff a sense of security as well as exposure to nature. “We tried to affirm the meaning and significance of life by creating a biophilic environment in the new school and engender a sense of not only great learning but of celebrating life,” stated Kellert.

The rebuilding of Sandy Hook Elementary School offers a poignant example of a community that recognised the value of biophilic design. But this design principle, as Kellert pointed out during ‘Biophilia and the Future of Sustainable Cities’, a symposium organised by the Centre for Liveable Cities and National Parks Board in Singapore on 14 October 2015, is also applicable to entire cities.

“We need to promote dense, compact, walkable, transit-invested cities, but we also have to incorporate nature into them.”

Biophilic design is based on the biophilia hypothesis, which states that ‘our affinity for the natural world is instrumental to our health, productivity and physical and mental well-being’. For city planners and designers, biophilic design thus involves making nature an integral part of buildings and urban landscapes, by offering direct contact with natural elements such as sunlight, water, plants and animals.

Far from being a mere theory, biophilic design is gaining ground in many cities, according to Professor Timothy Beatley, who runs the Biophilic Cities Network at the University of Virginia, USA. Since it was founded in 2013, the Biophilic Cities Network now includes cities as diverse as Oslo, Wellington, Vitoria-Gasteiz, Singapore, Cape Town, São Paulo and Bangalore, which have all pledged to foster biophilia and share their experiences with other global communities. “We need to promote dense, compact, walkable, transit-invested cities, but we also have to incorporate nature into them,” said Beatley.

One of the network’s newest members is Birmingham, which has ambitions to become the first biophilic city in Britain. “It’s not a place that’s thought of as full of nature,” said Beatley of this industrial hub. “But they recognise that in addressing the urban heat island phenomenon, adaptations to climate change, urban poverty and all the health challenges of the city, nature is a remarkable antidote to many of these things.”

“A growing body of evidence indicates that contact with nature is instrumental to health and productivity.”

The benefits of biophilic design go right down to individuals. Professor Kellert argued that “a growing body of evidence indicates that contact with nature is instrumental to health and productivity”. For instance, post-surgery patients in rooms with a window facing greenery recover faster than those in windowless wards. Contact with nature has also been correlated to lower obesity, adult diabetes and myopia in children. Schools with more natural lighting, natural materials and vegetation also report higher test scores, better attendance and more motivated students and staff.

At the community level, Kellert explained that even disadvantaged neighbourhoods stand to gain from a measure of biophilia. He highlighted the experience of a housing area in Chicago, where trees in certain parts were replaced by asphalt. “They thought that if they got rid of the trees, it’d be safer,” he remarked. “Ironically, with the buildings surrounded by vegetation, there was significantly lower drug and crime rates, greater optimism and superior social ties.

Professor Peter Newman of Curtin University’s Sustainability Policy Institute in Australia believes that biophilic design is on its way to becoming a mainstream trend, such that people would ask, “Why wouldn’t you do this? It’s just obvious you’ve got to do it!” One example is the technology firm Google, which is seeking to actively inject biophilic elements into its workspaces, having recognised their social-psychological, environmental and economic benefits.

On a larger scale, Newman believes that biophilic design offers the potential to create ‘regenerative cities’ that create more than they consume. This approach, he explained, involves the use of technologies and systems that not only reduce waste and raw materials, but enhance the surrounding environment. “We have begun to see that it’s possible to see a city not just as consuming nature, but of assisting the biological regeneration of an area,” he said. In Perth, where he is based, some 20 percent of homes now have solar panels on their roofs, producing 490 megawatts a year. “That is the biggest power station in Western Australia,” pointed out Newman, who expects households to export power back to the grid now that solar energy is approaching grid parity.

Other initiatives to restore nature in cities include St Louis in Missouri, US, which has embarked on a Milkweed for Monarchs initiative to plant 250 butterfly gardens across the city. Meanwhile, a programme in Wellington, New Zealand, to protect native birds is resulting in greater birdsong in urban neighbourhoods. “What an interesting idea, that every neighbourhood ought to be able to hear birdsong,” remarked Beatley. “And we have quite a bit of evidence about the therapeutic value of birdsong.” Beatley also highlighted Helsinki, where a “multi-layered, multi-scale network of green spaces” is connecting the city centre to its wooded edges, and a Spanish scheme to create rooftop gardens, not on buildings but on municipal buses.

“We have begun to see that it’s possible to see a city not just as consuming nature, but of assisting the biological regeneration of an area.”

On his part, Kellert shares Newman’s view that biophilic design goes beyond just sustainability. “Many low environmental impact designs,” he pointed out, “remain impoverished in terms of their positive and beneficial contact with nature.” A building with the highest green rating, for instance, could be ecologically sterile and forbidding to its users. “Biophilia,” he declared, “is the missing link in sustainable design.”

Looking ahead, Newman calls for more studies that show the economic benefits of biophilic design. “We need lots of case studies and demonstrations, we need local champions,” he said. But looking at cost alone is not enough. “It is important to understand that demand is part of the equation, not just cost,” stressed Newman. “It fills a need because of its human appeal, and it is going to be demand-led innovation, a social movement.”

Adding nature to cities may not necessarily be the cheapest design option. But Newman countered that it offers a superior alternative because it “performs better” and yet “feels cheaper.” In Seoul, for instance, a move to replace a highway with a ‘biophilic corridor’ initially raised concerns about traffic jams. “Well, the transport coped very well,” Newman remarked, “and they have created this beautiful centrepiece in the city.”

Each city will have to chart its own unique journey towards biophilia, but Beatley expressed his hope that at the end of the day, all residents will get to experience and engage with nature in their daily lives and benefit from this connection. Biophilic cities, he stated, are ultimately “cities that place nature at the heart of their design and planning, that care about and actively protect or restore that nature, biodiversity and wildness in and around them, and recognise the profound power of nature to make us healthier, happier and help us lead more meaningful lives.”

And as more people recognise these benefits and seek to make their cities more biophilic, Newman expects to see a growing global movement that urban planners cannot afford to ignore. “They do not even have to say exactly what they want; they just need to say, ‘We want biophilic urbanism as part of our city,’” he said of the necessary momentum at the community level. And as local champions spread the biophilia message while others press its case on economic grounds, Newman sees an inevitable, and possibly irresistible meeting of minds. “It has to be part of our future,” he concluded. “It is a social movement that needs to be mainstreamed, and it is going to be big.” O