Bridging the gaps of inequality

More cities are taking steps to address inequalities exposed and deepened by the COVID-19 crisis. In this third in a series of articles examining how cities are planning for a more sustainable and equitable recovery, we look at initiatives to boost affordable housing, help low-wage workers and improve poorer neighbourhoods. 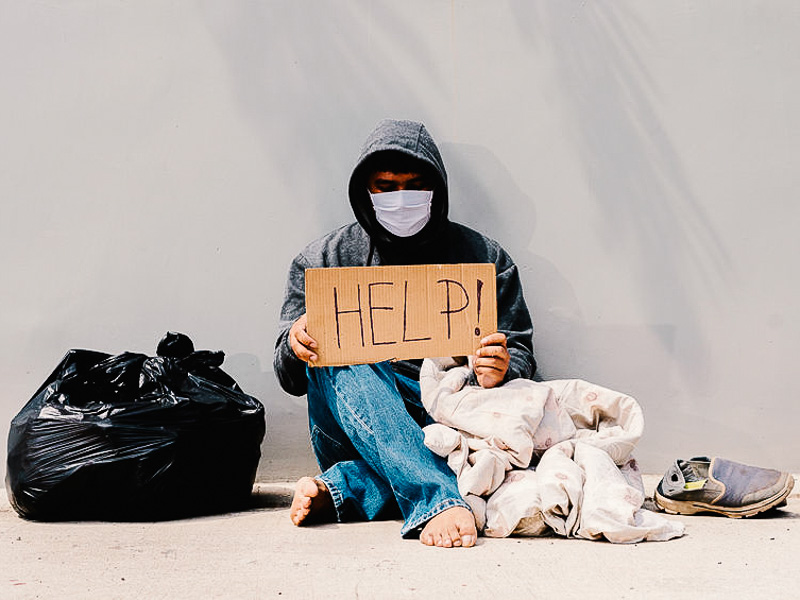 COVID-19 has exposed the equity gaps in cities more so than ever © Korakoch Sookkerd/ 123rf.com

From London to Paris to New York, cities worldwide are confronting a grim reality: the COVID-19 pandemic has hit their poorer residents harder due to many reasons, causing higher unemployment and death rates among them. “Many people who are higher-income have the resources and ability to work from home, which enable them to create layers of protection for themselves and ensure that they don’t come into contact with the virus,” explained Dr Steven Hoffman, a professor of global health, law and political science at Canada’s York University. Many low-income people, on the other hand, have jobs, including in the food, service and retail industries, that involve contact with others and cannot be done remotely, forcing them to choose between making a living and staying safe.

While wealthier residents can order food online for delivery, lower-income citizens usually cannot afford this option. They may also have to travel farther to buy groceries, increasing their exposure to the coronavirus, as poorer areas tend to have fewer supermarkets and stores selling budget-friendly healthy food. Those who earn less also typically live in crowded housing, compounding their risk of infection, compared to rich residents who could even have second, countryside homes to move to if the virus spreads in their city. In the longer term, lower-income citizens face more problems too, as they are less likely to be able to weather shortened working hours or job losses, or keep their small businesses going as people cut back on spending in the aftermath of the outbreak.

As cities struggle to contain the pandemic and heal their economies, many are enacting or expanding measures to reduce these inequalities, not just for the moment but for future.

To provide safer and better homes for lower-income residents and lighten their rent burden, many cities are increasing their supply of affordable housing. The COVID-19 crisis has opened up new opportunities. In the Canadian city of Calgary, the government plans to acquire hotels and other properties left vacant by depressed tourism and convert them into homes for the needy. Along with non-profit housing construction projects, this initiative will produce 5,100 homes for nearly 12,000 homeless and lower-income citizens by 2024.

Lisbon in Portugal, for its part, has turned its attention to the preponderance of short-term rental units in its housing stock. As in many other cities, the popularity of Airbnb and other home rental services before the pandemic led many landlords to rent apartments to tourists instead of locals. Currently, about 25,000 apartments in Lisbon, or eight percent of the city’s homes, are registered as short-term lets. With tourism at a standstill, the city is seeking to rent some of these apartments for at least five years and sublet them at below-market prices to local workers and students. Under this programme, called ‘Renda Segura’, or ‘secure income’, landlords will be guaranteed rental income, which they will not have to pay taxes on, while the residents will spend no more than 30 percent of their salary on rent. The city aims to secure 1,000 apartments by the end of 2020.

In India, New Delhi and many other cities are implementing a far-reaching ‘Affordable Rental Housing Complexes’ scheme for lower-income migrant workers and students. As part of the scheme, which was launched in July 2020, the cities will hand over disused government-built housing blocks to concessionaires for 25 years, on the condition that they repair and retrofit the properties and rent them at affordable rates to the workers and students. The cities will also urge developers to build affordable housing on their own unused land through incentives such as tax reliefs, loans with more generous terms than market ones, and higher gross floor area ratio allowances. 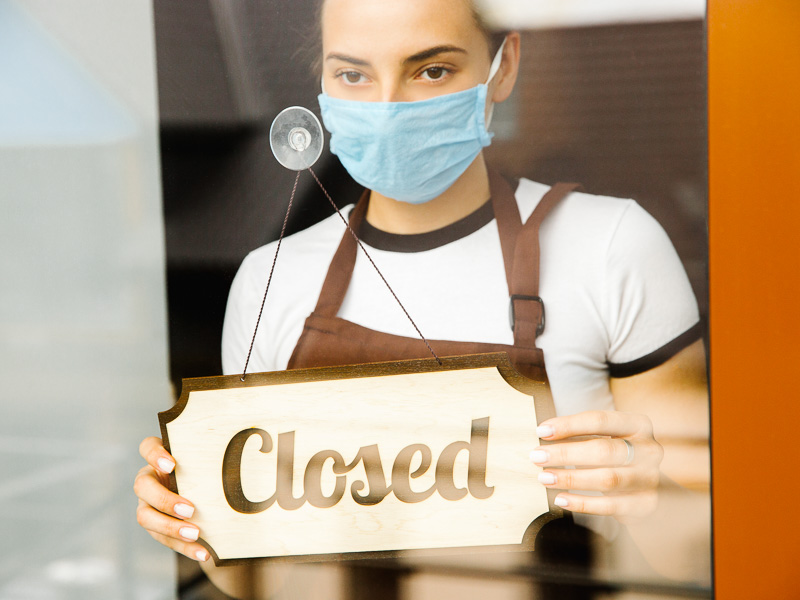 How can cities help small businesses stay afloat should the pandemic stretches over an extended period? © master1305/ Freepik.com

In the fight to get their economies back on track, cities have also carved out special assistance for lower-wage employees and small local businesses in poorer neighbourhoods. The former are more likely to lose their jobs, partly due to their limited ability to telework, while keeping the latter operational is key to preventing the areas from deteriorating further. In April 2020, Oklahoma City in the United States approved a USD $400,000 plan to give grants of up to USD $10,000 each to microbusinesses that are owned by low-to-moderate-income residents, or located in districts where the majority of residents are in those income brackets. The money can be used for payroll, rent, equipment, inventory and other expenses.

Looking ahead, New York City has negotiated agreements to prioritise the hiring of workers from poorer neighbourhoods for the renovation of its buildings and construction of selected new ones in the wake of the COVID-19 crisis. It will also propose laws to require contractors and firms working with the city to employ low-income residents and those from high-poverty communities. The American city estimates that this ‘Community Hiring Economic Justice Plan’ will produce 1,300 construction jobs for low-income communities for every USD $1 billion in construction projects, and lead to USD $1 billion in wages and benefits for them in its first full year of implementation. Then-New York City Mayor Bill de Blasio said: “We’ll use the city’s purchasing power to address hiring disparities and expand opportunities.”

By setting out an ambitious GBP 159 million (approximately USD $205 million) project to retrofit about 4,000 homes and build about 250 new ones in deprived neighbourhoods over the next five years, Liverpool in Britain is thinking long-term too. The initiative, which is part of the city’s COVID-19 recovery plan, includes upgrading the existing homes’ insulation and replacing their heating systems with more energy-efficient ones. When implemented, it will generate 4,360 construction jobs, lower the households’ utility bills, reduce sickness among them and cut the city’s carbon emissions. The government said: “The city’s most vulnerable people, the unemployed and those with health problems, live in the communities with the worst housing. This will provide good quality housing to the people who most need it.”

“Leveraging a moment when policies and social norms may be more malleable than during normal times, we must take bold steps to address the inequalities this crisis has laid bare.”

Other cities are also taking steps to improve their less prosperous neighbourhoods and better address lower-income residents’ issues in the wake of the COVID-19 outbreak. Since May 2020, Baltimore and other cities in the state of Maryland in the United States have enabled their low-income residents to shop for groceries online at approved stores using their government-issued financial aid debit card, so that they do not have to travel long distances to supermarkets to buy fresh and affordable food if these are not available near them. Previously, the card could be used only at physical stores. This change not only lessens the residents’ COVID-19 infection risk but is more convenient for them in the long run.

Baltimore is also experimenting with other methods to overcome these ‘food deserts’ that have limited access to healthy and inexpensive food. It recently concluded a pilot programme where eligible residents in some of these areas could get subsidised trips from a ride-hailing firm to and from participating grocery stores that sell such food. Before the pilot, the residents, who do not own cars, spent an average of 34 minutes to travel to or from grocers. The city is currently evaluating the results of the trial. It is also funding initiatives that bring the food closer to lower-income residents, such as one by the city’s Loyola University that purchases fresh seasonal produce in bulk and resells it to neighbourhood grocers, enabling them to avoid the additional charges for small orders that had deterred many of them.

Expanding access to lower-cost childcare services is another priority for some cities. “Securing affordable childcare is an enormous burden on low-income working mothers during the best of times, but during this COVID-19 pandemic, we have utter desperation as mothers are forced to choose between work or staying at home and not having enough money to pay their rent and feed their kids,” said Los Angeles City Council President Nury Martinez, who led the American city’s decision to create 50 temporary childcare centres at parks for low-income families. These will remain open until December 2020.

In August 2020, the city of Seattle in the United States amended its land use laws so that more childcare centres can be built more quickly and serve more people. Under the new rules, for example, centres can be built in more areas without the need to apply for a permit that adds an average of five months to the permitting process, and they are also exempted from floor area limits in some zones, incentivising developers to include them in more facilities. The city added that it is looking into ways to make childcare services more affordable.

The United Nations noted that the COVID-19 outbreak has deepened inequalities, with poorer communities bearing the brunt of its impact. It said: “This time of crisis must be used as an opportunity to invest in policies and institutions that can turn the tide of inequality. Leveraging a moment when policies and social norms may be more malleable than during normal times, we must take bold steps to address the inequalities this crisis has laid bare.” O