The inaugural Prize Laureate Bilbao is continuing to set a example through a comprehensive flood protection plan, a ‘green ring’ project to increase access to nature, a high-speed rail network, and the conversion of a derelict peninsula into a showcase for smart, sustainable and socially-equitable living.

Cities mentioned in this article:
Bilbao 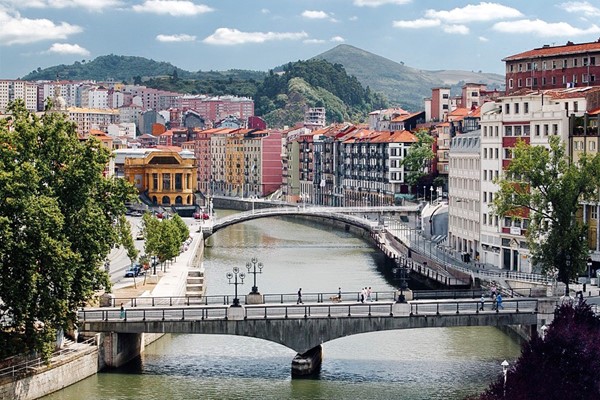 When the Lee Kuan Yew World City Prize was inaugurated in 2010, the city of Bilbao in Spain was a compelling first winner. In the 1970s and 1980s, the city was struck by twin disasters: a worldwide economic crisis devastated its heavy industry economy, causing it to lose nearly half of its industrial jobs and more than one-tenth of its population, while a major flood destroyed large parts of it. Undeterred, its government drew up an ambitious plan to bring the city back from the brink, and successfully executed it over the next few decades.

Among the government’s crowning achievements was the development of a publicly-owned organisation called Bilbao Ria 2000 to oversee the plan’s implementation. To ensure that the city’s rehabilitation would not stall for lack of financing, Bilbao Ria 2000 upgraded plots of public land, sold parts of them to private developers, and used the proceeds to revitalise other areas, creating a virtuous circle. In this way, the organisation also provided an effective way for the government, businesses and community to work in concert to rebuild the city.

The government’s fiscal discipline for Bilbao Ria 2000 was also matched by a far-reaching vision for the city’s transformation. Over the years, for example, the Abandoibarra waterfront district, which consisted of unused and polluted land once occupied by shipyards and associated industries, was cleaned up and converted into the new heart of the city. The Port of Bilbao was relocated to free up more space, and a series of landmarks, including the world-renowned Guggenheim Museum, Bilbao Maritime Museum and Euskalduna Conference Centre and Concert Hall, was erected to create a cultural mecca to attract tourists.

At the same time, the government invested in critical infrastructure to modernise the city, including a new metro system and water sanitation system. “The success of Bilbao is largely attributed to its integrated and holistic approach to achieve economic, social and physical transformations. Its emphasis on environmental clean-up, use of culture, internationalisation and design, major improvements to its infrastructure, and restoration of its historic areas over some 25 years successfully rejuvenated the city,” said the Lee Kuan Yew World City Prize’s jury.

“The crisis of our traditional industry and flooding was the beginning of the new Bilbao we relish today, the Bilbao of the Guggenheim Museum, and the Bilbao of the 21st century: a model of urban development based on sustainability, social justice and a focus on education, talent and innovation.”

The island of tomorrow

Since then, Bilbao has continued to look to the future. The city’s ongoing redevelopment of its Zorrotzaurre peninsula could serve as a blueprint to others on how to revive a brownfield site. After the 1970s economic crisis, the 840,000-square-metre peninsula declined from a hive of industrial activity into a neglected ghost-town inhabited by fewer than 500 people at its nadir. The government is rebuilding it as a progressive residential and leisure hub.

About two-thirds of the peninsula will be devoted to public spaces and buildings for education, healthcare, sports and cultural uses. Nearly 5,500 new homes will also be built, with about half of them set aside as social and subsidised housing for lower-income families. The owners of the peninsula’s existing homes will receive assistance from the government to either improve their properties or relocate to other parts of Bilbao. These measures will make sure that the new island is affordable to most residents and serves a greater public purpose.

In line with the global movement towards smart and environmentally-friendly cities, the peninsula will also have zero-emissions buildings, facilities for electric cars and an entirely electric public transport system comprising a tramway, electric buses and shared bicycles. Additionally, two longitudinal axes across the peninsula will enable pedestrians and cyclists to travel around it quickly and safely. Even the public lighting system will use energy-efficient LED bulbs and have presence detectors and photocells so that the lights are switched off automatically when there is enough natural light or if there is no one in the area.

An economy fit for future

The peninsula’s regeneration will also play a key part in the city’s plan to future-proof its economy. In 2014, the government identified the city’s three most promising sectors, namely advanced business services, creative and cultural industries, and the digital economy, and pledged to support their growth to generate more high-quality jobs.

The peninsula will have two ‘innovation districts’ focused on creating and refining new technologies, products and services in those sectors. The North Innovation Urban District will have 11 buildings spanning 50,000 square metres for creative and cultural disciplines, while the South Innovation Urban District will have eight buildings with 90,000 square metres in total for advanced business services and digital technologies. Several of the peninsula’s public buildings will also be used for training courses for entrepreneurs, and to house business incubators and innovation and technology associations.

The government also announced an Integrated Action Plan to further align the city’s efforts in those three sectors. As part of this plan, it has rolled out several flagship initiatives, including a new organisation called AS Fabrik that aims to prepare Bilbao’s manufacturing companies for the worldwide shift towards Industry 4.0, where automation, machine learning and other Internet-connected and digital technologies are used to improve plant processes. AS Fabrik is developing educational programmes for the city’s university students, entrepreneurs and professionals to help them acquire relevant skills, hosting networking events for policymakers, academics and business leaders, and setting up test labs for the validation of new products and services.

BasqueGameLab, another one of the initiatives, is a collaborative workspace where companies brainstorm on ways to apply gaming principles and technologies, such as virtual and augmented realities, to other industries to improve them. This includes producing simulations to train employees in the healthcare, aeronautics, automotive and other sectors.

A vision for the 21st century 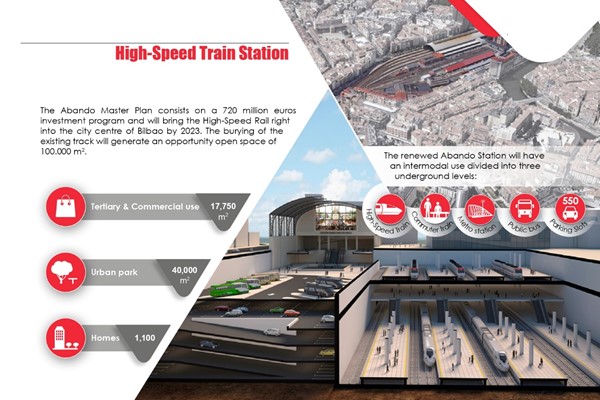 Three ongoing major infrastructure projects will also stand the city in good stead as it tackles the longer-term challenges of climate change and urbanisation. A research project between the government and a consortium of urban climate adaptation scientists had found that the city’s Nervión river will pose increasing flood risks due to climate change. By 2050, the city could experience ten percent more downpours, and the river could be 22 percent higher at its peak flow compared to its current levels.

To protect the city, the government is carrying out a comprehensive anti-flood plan. Part of the Zorrotzaurre renewal project will involve removing the small land mass that connects the peninsula to the city’s mainland, turning the former into an island and allowing the river to flow through on both sides of it. This will lower the river’s height by one metre, significantly reducing the risk of flooding. Furthermore, the government will build flood protection walls on both sides of the river, as well as three stormwater tanks across the city to hold rainwater temporarily and prevent downpours from overwhelming the drainage system. The completed first tank, in the district of Etxebarri, has a capacity of 75,000 cubic metres.

As the city becomes more built-up, the government is also taking steps to give residents more and better green spaces to improve their physical and mental wellbeing. Its current ‘Green Ring’ project will connect the forest parks on the city’s outskirts with urban parks and other green spaces in the city, to produce a 99.3-kilometre green loop signposted with information about each area and interesting places in the vicinity. The city centre will also have 11 routes that reach various points in the green ring. When the project is completed, Bilbao will have 24 square metres of green space per resident, up from six square metres per resident in 1999.

To boost the city’s connectivity with others, the government will also build part of a high-speed rail network that will link it to the Basque region’s two other major cities, Vitoria-Gasteiz and Donostia-San Sebastian, and to Madrid, Paris and other cities. By burying its existing train track in preparation for the new network, it will free up about 100,000 square metres of space in the city centre, part of which will be used for a new large park with sports areas. The high-speed rail network’s terminal in Bilbao is slated to be operational in 2023.

Looking back on Bilbao’s history, Mayor Juan María Aburto said: “The crisis of our traditional industry and flooding was the beginning of the new Bilbao we relish today, the Bilbao of the Guggenheim Museum, and the Bilbao of the 21st century: a model of urban development based on sustainability, social justice and a focus on education, talent and innovation.” O