A marriage of culture and commerce — the Suzhou success story

Suzhou mastered the art of building a future out of traditions. Since winning the 2014 Prize, it harnessed its historical and cultural assets in urban development to boost its tourism and economy, and plans to revitalise its traditional industries while investing in emerging ones.

Cities mentioned in this article:
Suzhou 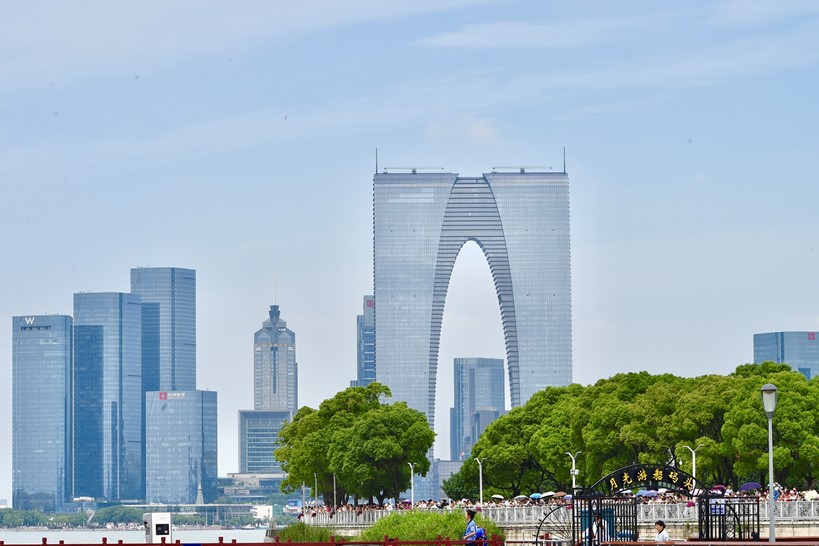 The Gate of the Orient © Chen Yuhe

One of China’s oldest cities in the Yangtse River Basin, Suzhou has long mixed commerce with artistry. By the 14th century, it was the country’s leading producer of silk, and it has protected its cultural and built heritage even as it has evolved to meet the changing world and its residents’ needs. When the city was awarded the 2014 Lee Kuan Yew World City Prize, the jury noted that it had “successfully transited from an agricultural, manufacturing, export-oriented economy to an innovative, high-value, service-oriented economy”.

In the 1990s, it partnered Singapore to set up a high-tech industrial estate, which has gone from strength to strength. In the 25 years since its founding, the China-Singapore Suzhou Industrial Park (SIP) has contributed about 800 billion yuan (US$113 billion) to the city’s tax revenues, achieved more than 900 billion yuan (US$127 billion) in investments in fixed assets and generated more than US$1 trillion in foreign trade volume.

To further modernise the city, the government also implemented novel policies, including a ‘1-for-3’ relocation housing policy that offered rural pig farmers three units of urban housing in exchange for their one unit of farm residence. This social engineering not only accelerated the city’s urbanisation but also stopped the farmers’ contamination of its scenic Stone Lake, which has been remediated and now serves as a tourist attraction.

The city also preserved, restored and improved other historical sites, including the 1.6-kilometre Pingjiang Road, which dates back more than 2,500 years, and the Classical Gardens, which were built in the 6th century, so that these will continue to draw visitors from around the world. “Throughout its rapid growth, Suzhou has maintained its specific and distinctive local identity and culture, creating a high quality of life for its residents and workers and attracting tourists to share in its past and future,” the Prize jury said, adding that its success could inspire many other rapidly urbanising cities.

The city’s deft balancing act continues to serve it well. In recent years, the government has created districts to encourage the growth of both established and promising industries and tapped on the city’s heritage more to distinguish it from others. In the northern part of the city, it built the Suzhou High-Speed Railway New City, which houses companies and organisations in three major sectors, namely research and development, cultural creative arts and financial technology. The New City, which has a planned area of 28.9 square kilometres, recorded an annual gross domestic product growth of 48 percent in 2018.

The Wujiang Taihu Lake New City in the southern part of the city is another incubator for the financial and other industries. The New City’s Financial Town has attracted over 250 financial institutes and organisations, including venture capitalist, investment and wealth management firms. The burgeoning financial centres in the north and south of Suzhou are also supported by the new Suzhou International Financial Square, a 450-metre-high skyscraper in the SIP that spans 393,208 square metres of built area. 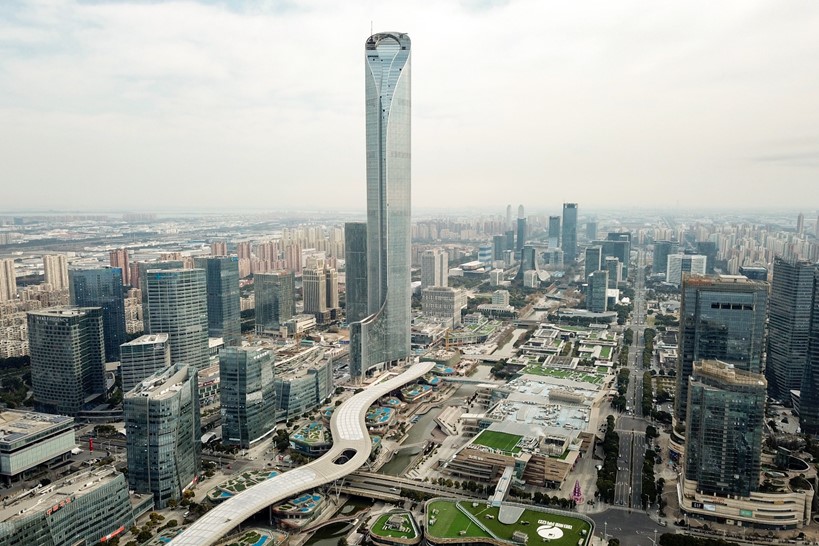 The Qipao Town in the Taihu Lake New City, on the other hand, is another example of how Suzhou is utilising its unique history for the city’s future. Highlighting the city’s longstanding expertise in silk and silk products, the town has a Qipao Museum, Qipao Research Institute and Qipao Outdoor Performance Plaza to showcase the traditional Chinese costume, which is also called the cheongsam. With luxury qipao and silk brands such as Ji Xiang Zhai, Golden Scissor and Janchoo also putting down roots in the town, it is now a nexus of culture, business and tourism that is helping the city to flourish by spotlighting its past.

For protecting and preserving its intangible and built cultural heritage, which also includes its Dragon Boat Festival customs and Song brocades, a type of cloth produced by the city that is renowned for its vibrant colours, patterns and softness, Suzhou was named a World Heritage Model City by the Organisation of World Heritage Cities in 2018. In the same year, the city announced more development plans that will capitalise on its history.

The city is designing a section of the Grand Canal National Cultural Park, which is China’s monumental undertaking to build a 690-kilometre cultural belt along part of the country’s Grand Canal, one of the world’s oldest and longest canals. The park, when opened, will span 11 cities, including Suzhou, and be the globe’s largest national park.

Mr Zhou Naixiang, Suzhou’s Communist Party Secretary and former Mayor of Suzhou, said: “Along the Suzhou section of the Grand Canal, there are not only a large number of tangible cultural heritages, but also a large number of intangible cultural heritages… We will systematically promote the work (on the section) with a cultural vision.” On the horizon are projects such as the construction of a museum cluster, and the revitalisation of traditional handicrafts and industries, including embroidery, jade carving and mahogany furniture, along the canal.

“Suzhou has become a hub for trade and business, and is one of the most popular destinations for global professionals to turn their dream into reality.”

The canal is also a focal point of Suzhou’s wide-ranging efforts to upgrade its municipal systems to prepare for the future. In coordination with the works for the cultural park, the government will reinforce the canal’s flood-banks that extend across the city’s Xiangcheng, Gusu, Gaoxin, Wuzhong and Wujiang districts, as a precaution against climate change. It will also demolish illegal buildings and plantations along the canal and build a forest and wetlands which will protect the area’s ecology and act as additional flood prevention measures.

In 2015, the city also completed a 16-kilometre-long fitness trail along its ancient moat that similarly blends nature, recreation and flood protection. The trail connects eight historical city gates, several famous bridges and the Classical Gardens, and has dozens of sports squares along the way for residents to exercise while enjoying the beautiful scenery along the moat. Permeable concrete was also used to construct the trail to absorb rainfall and reduce the risks of floods in the city. 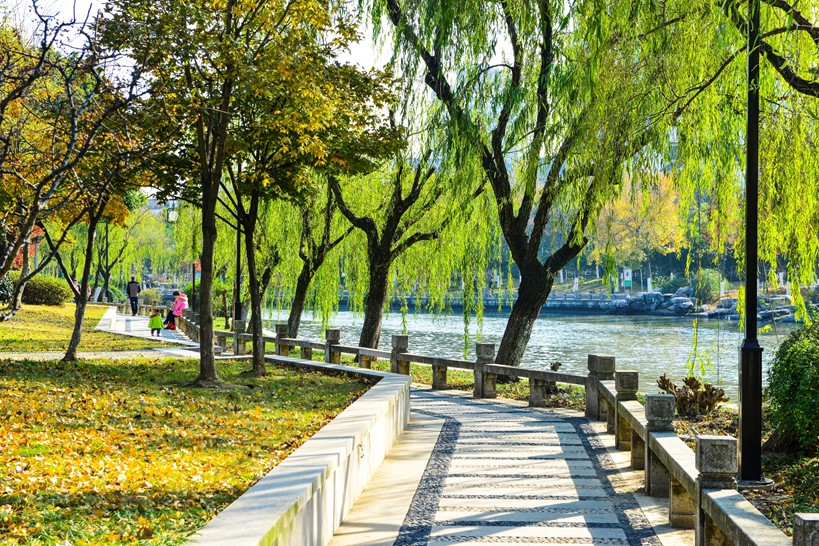 Other concluded, ongoing and upcoming projects will safeguard the city’s traffic, power, water and telecommunications networks. In 2015, Suzhou was designated as one of China’s first pilot cities for underground pipe galleries, which are tunnels that carry pipes and cables necessary for urban living, including those for electricity, water, natural gas, heat, communications, cable television and circulation of reclaimed water. These advanced tunnels are also equipped with sensors and monitoring systems and have access points for maintenance and upgrades so that roads do not have to dug up for such works. Suzhou currently has three pipe galleries and plans to expand its network’s length from 34 kilometres in 2017 to 193 kilometres by 2030.

A dramatic expansion of the city’s metro system is also underway. By 2023, it will complete a 41-kilometre-long rail line that will be linked to Shanghai’s metro system, facilitating travel between the two cities. The line is expected to cost 27.4 billion yuan (US$3.9 billion) and will have 27 stations, including a terminus at the SIP. In the longer term, the city intends to have 15 metro lines totalling 768 kilometres, up from just three lines now.

Furthermore, intelligent transport systems to improve the city’s traffic are already in place. At the Suzhou Public Transport Command Centre, such technologies provide officers with a real-time overview of the city’s public bus service, which comprises about 370 routes and nearly 4,700 buses that ferry 1.5 million passengers daily. Data collected from surveillance cameras and payment machines on the buses, as well as from cameras at bus stops, aids operators in monitoring passenger flows so that they can adjust bus schedules, frequencies and speeds as needed. With the intelligent systems, the city can now predict its traffic flow within the next hour to an accuracy of more than 94 percent.

Such technological advancements, combined with a careful tending of traditions, will continue to be the Suzhou way. In May 2019, then-Mayor of Suzhou Li Yaping noted that the city’s development projects have helped it to prosper. He said: “Suzhou has become a hub for trade and business, and is one of the most popular destinations for global professionals to turn their dream into reality.” O