Hamburg’s creative use of brownfields has revitalised underutilised spaces to create more homes, offices, shops and public amenities. A once stigmatised area is transformed into a model of sustainable living, while a major highway is being covered with landscape decks to curb pollution and create more parks and greenery.

Cities mentioned in this article:
Hamburg 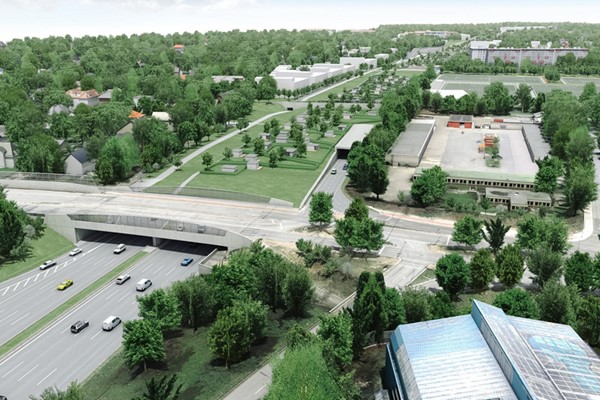 Visit Hamburg in Germany today and you will find a city in the midst of a transformation. In the past decade, its government has started projects to rejuvenate districts, redevelop abandoned and underused areas and make better use of the spaces allocated to the city’s transport system.

These efforts, some of which are ongoing, have helped Hamburg to become ‘an attractive and welcoming city of opportunities’ that can meet its growing population’s increasing demand for housing and urban mobility, noted the jury for the 2018 Prize when it recognised the city with a Special Mention in 2018.

These works will also help the city to prepare for the future, including the impact of climate change, said Professor Jürgen Bruns-Berentelg, Chief Executive Officer of HafenCity Hamburg GmbH – a public company tasked with some of the projects – in a recent interview with the Urban Redevelopment Authority of Singapore.

He added that Hamburg’s varied experience in urban regeneration offers valuable lessons for other cities: “We have shown that it is possible to expand the inner city, increase housing densification, reduce traffic within neighbourhoods and create more green spaces by making use of existing spaces in a far more efficient way.”

“We have shown that it is possible to expand the inner city, increase housing densification, reduce traffic within neighbourhoods and create more green spaces by making use of existing spaces in a far more efficient way.”

In 2007, Wilhelmsburg, an area south of Hamburg’s River Elbe, was considered a struggling part of the city. After a flood in 1962 that devastated the area and caused many residents to flee, it became sparsely populated and one of the poorest areas in the city, with crime and high school drop-out rates that were about twice of the city-wide average.

In 2002, more than 100 residents of the area worked with the authorities to create a White Paper that envisioned better schools for children and jobs for young people, high-quality and family-friendly residential buildings, and a better transport network. The Hamburg government then created an International Building Exhibition (IBA), a government-owned company with its own budget and mandate, to redevelop Wilhelmsburg and two other areas, Veddel and the Harburg upriver port.

By 2013, IBA Hamburg had initiated or completed 70 projects across all three areas to provide 1,733 homes, 100,000 square metres of commercial space, eight schools, two senior citizens’ homes, three day-care nurseries, four sports facilities, a commercial park, a centre for artists and creative workers and more than 70 hectares of green space. It also attracted more than 140 partners, including corporations and organisations, and more than 700 million euros of private investment for the project.

Wilhelmsburg, which was home to factories, a rubbish dump, public housing and mostly working-class Turkish immigrant neighbourhoods, was transformed into a model of sustainable living. A tower built during World War II to house anti-aircraft guns was converted into a solar power plant and biogas-fuelled heat and power station to provide renewable electricity and heat to 800 local households.

“By building more and better homes, improving the schools and creating spaces for commercial enterprises, we encouraged more people to move to Wilhelmsburg without pushing existing residents out,” said Prof Bruns-Berentelg. IBA Hamburg also tested and constructed experimental buildings in the area, including ‘hybrid houses’ with modular spaces that can be easily converted from offices to apartments or shops, and vice versa.

Work on Wilhelmsburg is ongoing, including projects to retrofit old buildings to reduce their energy use, and to expand the area’s production of renewable energy. Such energy is expected to meet all of the area’s electricity needs by 2025 and heating demand by 2050. 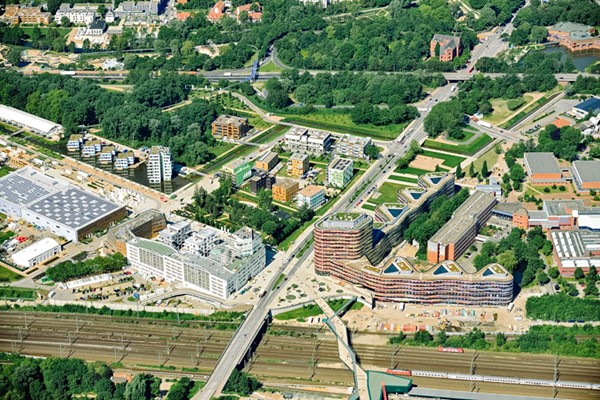 While the Hamburg government’s achievements in Wilhelmsburg set a high bar for the rejuvenation of run-down districts, its ongoing projects in the city’s Altona borough and HafenCity quarter show the way to redevelop abandoned or underused industrial sites.

In 2014, the government started building the first phase of a mixed-use district on 13 hectares of land in Altona previously occupied by a disused railway freight station and a derelict brewery. The ongoing construction will produce 1,600 homes, the first part of a park that will eventually span nearly 3 hectares, public squares, four day-care centres and a school.

The second and final phase of the project is slated to start in 2024 after the relocation of the still operational Altona railway station. In 2015, Deutsche Bahn, the railway company in charge of the station, sold its site to the Hamburg government after estimating that only about 60 percent of it was being used effectively. The move will free up 16 hectares of land for 1,900 more apartments and other public amenities in the area.

In keeping with the government’s social goals, the eventual 3,500 residential units will be divided into one-third state-subsidised social housing, one-third rental apartments and one-third privately-owned homes. At least 20 percent of the total floor area will also be reserved for building cooperatives to encourage residents to take care of the neighbourhood.

“We are also looking at ways to reduce traffic in the new district by keeping car-based traffic out and making it more efficient for people to walk. This will increase the residents’ general well-being. The Altona project is an important example of how we can reuse former railroad areas within Hamburg,” said Prof Bruns-Berentelg.

The HafenCity project, on the other hand, capitalises on areas on the Elbe’s north bank that have been underused or unused because they were not suitable for container operations. These spaces are being redeveloped into a new city centre district that will provide homes for more than 13,000 people and create up to 45,000 jobs when it is completed by 2025.

While the Hamburg government is building HafenCity from scratch, it has taken measures to ensure that the new district has a high degree of visual and spatial connectivity with the rest of the city, Prof Bruns-Berentelg said. “Where the new developments connect to the existing city, we use the same materials and even colours to bring the two together,” he said.

New mid-rise and high-rise buildings intended to increase Hamburg’s housing and commercial density are concentrated in the middle of HafenCity, away from its perimeter where it meets the rest of the traditionally low-rise city. The district’s layout also enables people to see the city’s old churches and city hall tower from many points, improving the sense of integration.

“Another important lesson that HafenCity can offer to other cities is that it is very much financed by its own activities and not by transfers from the government,” said Prof Bruns-Berentelg. Proceeds from building site sales will fund infrastructure, roads, bridges, promenades and parks, the relocation of businesses and site clearance costs.

“In Wilhelmsburg, Altona and HafenCity, and with all these projects, what we have seen is that we can generate new paths of development in the city and achieve great progress.”

For decades, the major A7 highway connecting Germany to Scandinavia has cut through Hamburg, dividing some of the city’s neighbourhoods and polluting them with noise and dirty air from the heavy trucks that use the motorway. By 2022, the Hamburg government will complete an ambitious ongoing project to cover three sections of the highway in the city totalling 3.5 kilometres, turning them into tunnels and creating 25 hectares of usable space on the roofs.

The covers will not only reconnect Hamburg’s Schnelsen, Stellingen and Altona districts on either side of the highway, but also reduce the noise and pollution from it. “In a few years, there will also be little to remind residents of the motorway traffic queues that occur where the A7 cuts through Hamburg’s western districts. Instead, the new areas on top of the covers will serve Hamburg’s population with space for recreation and leisure,” the government said.

The 560-metre-long cover in Schnelsen will have a meadow bounded by a promenade and allotments for gardeners. The landscape on the 893-metre-long cover in Stellingen will also have a meadow and allotments, as well as a promenade along its entire length, a tree park and a tree-lined square. The Altona cover is the project’s most extensive, at about 2 kilometres, and will consist of a green corridor extending all the way from an existing park to the Elbe.

The Hamburg government noted that the covers will also turn several nearby areas into attractive sites for housing and other developments. About 1,700 new homes are already proposed for one of the areas. “We can accomplish several goals at once: new parks and allotments in addition to urgently required housing in centrally-located neighbourhoods that will no longer suffer from motorway noise,” said Ms Petra Störmer, head of the project’s group at the Ministry of Urban Development and Environment.

Prof Bruns-Berentelg said that the project shows how cities can rethink and adapt their transport systems to benefit residents. “Such major traffic arteries may be necessary so that you cannot reduce their dimensions, but you can always come up with creative solutions to make better use of them,” he said.

He summarised: “In Wilhelmsburg, Altona and HafenCity, and with all these projects, what we have seen is that we can generate new paths of development in the city and achieve great progress.” O