After winning the 2018 Prize, Seoul is going full speed ahead with new and ongoing urban regeneration initiatives to tackle emerging challenges. From innovative interventions to dampen rising housing prices, to a grand plan for greenery, Seoul is on a path to a safe and sustainable future. 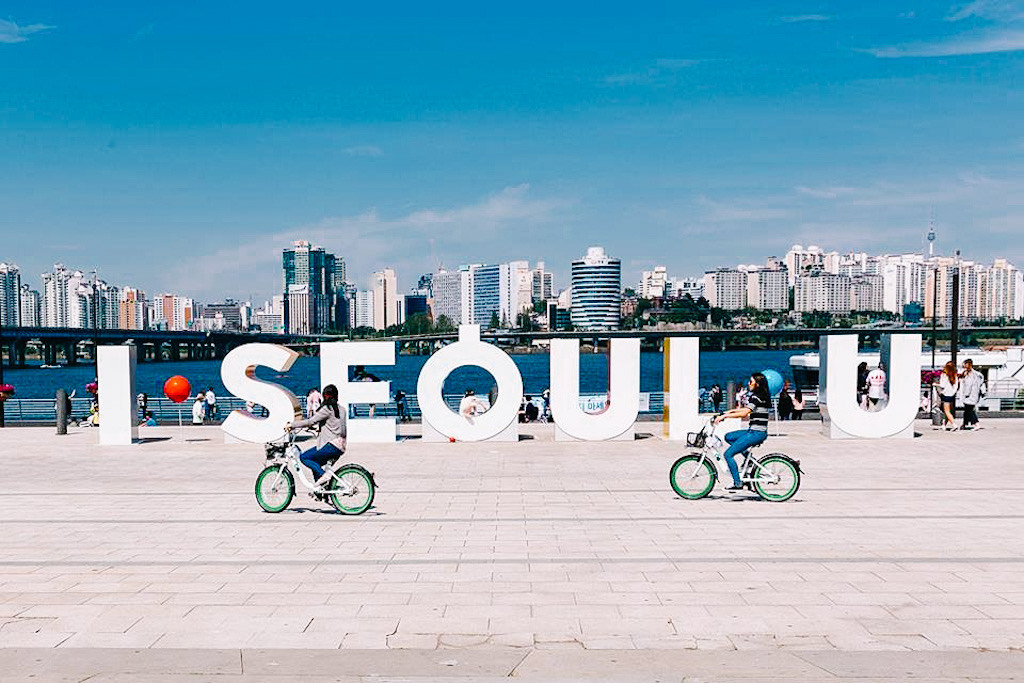 Every city faces evolving challenges and needs. Since the 2000s, Seoul in South Korea has revolutionised its urban planning process to consult citizens about development projects, emphasise healthy and sustainable modes of transport, and encourage innovation in business. Its efforts, which have turned it into an inclusive, socially stable and forward-looking city, also led to the city winning the Lee Kuan Yew World City Prize in 2018.

Despite its achievements, however, the city faces new challenges, including rising housing prices that have created anxiety, especially among the young and financially-disadvantaged, and threats to its economy caused by growing uncertainty and volatility in global trade.

In response, the government has rolled out further initiatives to entrench the city’s hard-won advances, protect and improve residents’ quality of life, and prepare for the future. These comprehensive measures run the gamut from housing to trade to the environment.

A helping hand with homes

To provide more affordable housing and boost the economy, the government is turning 6.9 million square metres of unused or underused state-owned land, including a traffic island in the Yeonhui-dong area, into public housing and offices. This project, slated to be completed by 2028, is expected to produce 22,000 homes and 205,000 jobs.

The initiative also dovetails with other government goals. Many of the new housing complexes will be built near public transport lines and hubs, encouraging their residents to use these more sustainable modes of transport instead of private vehicles. When the public land currently occupied by the Jeungsan Rain Pump Station is redeveloped into a public housing complex, for example, the residents will be able to access three nearby subway lines and commute easily to the three regions of northwest Seoul, Ilsan and Paju.

In another part of the city, two outdoor bus garages will be moved indoors or underground, and their current site will house new public apartments, a park and other amenities. The relocation of the garages into enclosed spaces will contain the noise and smoke generated by the buses, reducing the pollution of residential spaces, while the new homes will exert downward pressure on housing prices.

“We will make sure that housing issues do not pose a handicap for newlywed couples who are starting a new chapter of their lives with a dream of a brighter future.”

The infrastructural interventions will also be complemented with policy improvements. In October 2019, then-Mayor Park Won-soon announced that the government will relax eligibility conditions for a housing loan programme, increase the annual supply of new public homes from an average of 12,000 units to 14,500 units, support couples with newborns to move into bigger houses, and launch a website – the Seoul Housing Portal, which married couples can use to identify the best housing support programme that suits their situation and apply for it.

These measures are expected to help about 25,000 couples each year, which means that one in two couples getting married each year will be able to receive benefits from the city in the form of financial aid or a place in a public rental house. Mayor Park said: “We will make sure that housing issues do not pose a handicap for newlywed couples who are starting a new chapter of their lives with a dream of a brighter future.”

Since his inauguration, the city has supplied 140,000 new public homes. “We will increase the ratio of public houses to over 10 percent to secure a safety net for young people and other citizens. We will increase our housing supply until it has an impact on the housing market. We will do our best so that the new developments are self-sufficient, with houses, recreational facilities and jobs, and lead to further local development,” he said. 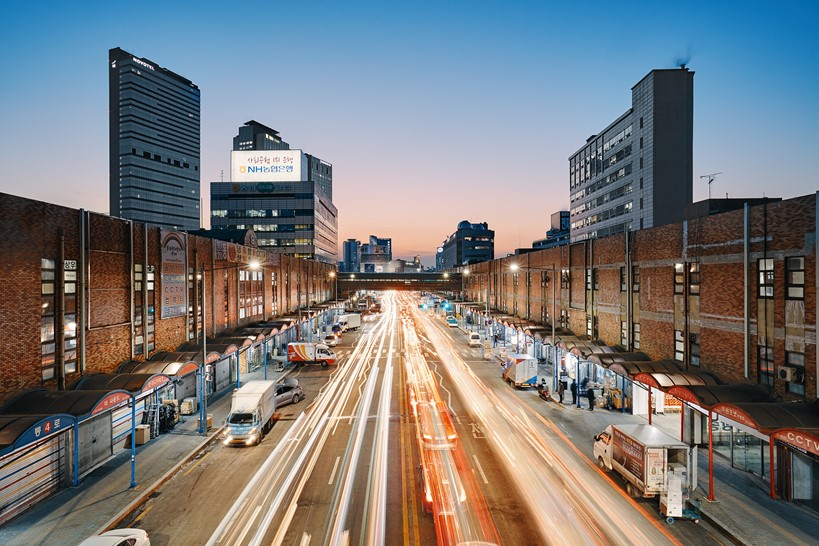 Other urban regeneration projects will help the city to replace sunset industries with sunrise ones, and strengthen evergreen sectors. When the Yongsan Electronics Shopping Centre opened in 1987, it was South Korea’s largest retail complex selling electronic products, with a total floor area of about two million square metres across multiple malls. After a decade as a premier shopping nexus for computers and videogames, however, the institution’s business was derailed by 1997 Asian financial crisis and the rise of the Internet and e-commerce. Over time, its vacancy rate rose to 22.7 percent.

In 2017, the government announced that it would rejuvenate the complex and its surrounding area as a ‘Digital Maker City’ that also supports youth education and entrepreneurship in advanced digital technologies. It has partnered 15 institutions, including universities and companies, to bring this vision to life. As a first step, a “Yongsan Electronics’ Thinkers Alley” spanning 6,000 square metres has been set up for anyone to design prototypes of their ideas and receive entrepreneurial support and education.

The universities will develop on-site campuses to host education and entrepreneurship programmes for students, while CJ Corporation, a South Korean conglomerate, will provide coding classes for elementary and middle school pupils in the area. LG Uplus, the cellular carrier owned by the LG Corporation, will establish a 5G cellular network technologies testbed, and the Woori Bank will offer low-interest loans to local merchants. 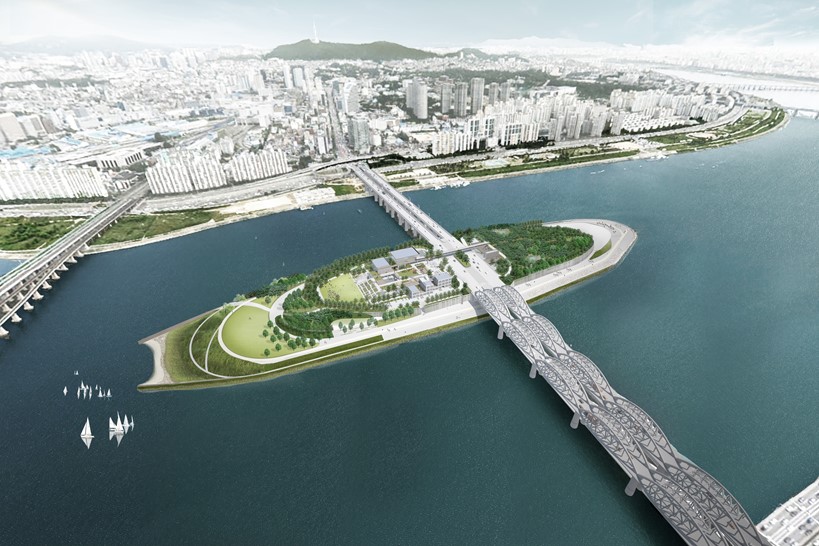 Closer to the city’s Han River, the Nodeulseom Island has been upgraded into a music-centred cultural hotspot. The artificial island was originally a manmade sandy plain that extended into the river from one bank to support a bridge across the river. The plain was a popular area for leisure and recreational activities, serving as a beach in the summer and a skating rink in the winter. When further developments in the river turned it into an island, it became inaccessible and disused.

For over three years since 2013, the government mediated discussions with citizens and experts about the island’s future. It eventually organised a competition to solicit proposals, which resulted in the decision to build a music-centred cultural complex on the island. Today, the complex is accessible from the bridge, and houses a multipurpose hall for lectures and events, a concert hall, a bookstore that champions independent bookshops and publishers, a restaurant, and more.

A grand plan for greenery

As Seoul continues to reinvent its urban spaces to make better use of them, it has also taken care to expand its greenery to improve its liveability. In the late 1990s and 2000s, the Gyeongchun rail line was realigned, creating spans of defunct railway tracks. In 2013, the government started to convert a six-kilometre stretch, from the Kwangwoon University Station to the city limit, into bicycle and foot paths, and build a 182,000-square-metre park around them.

The new Gyeongchun Line Forest Park was opened in sections from 2015 to 2017, and has gardens as well as rest areas resembling train station waiting rooms. The bicycle and foot paths also connect institutions and tourist attractions such as the Seoul National University of Science and Technology, Seoul Women’s University and Taereung Royal Tombs. “By using the original railroad tracks, Gyeongchun Line Forest Park has been reborn as a space filled with memories, encounters, sharing and community,” the government said. 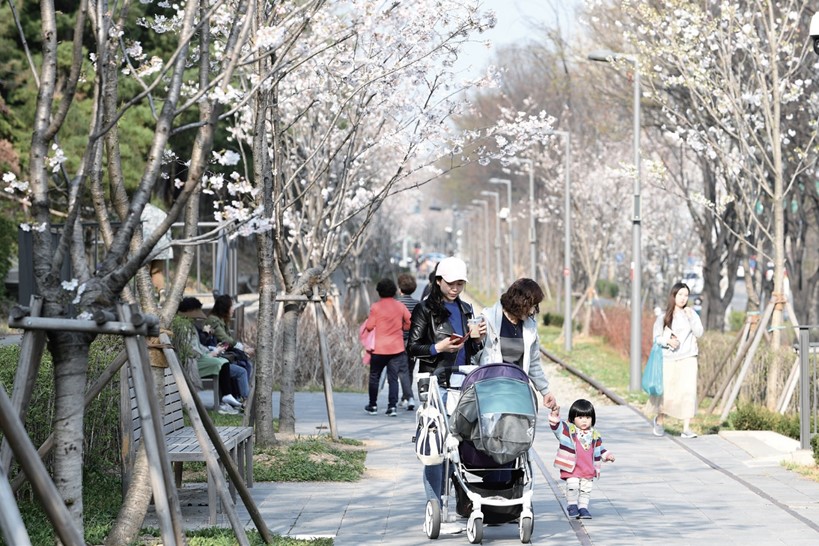 An ongoing project will further and dramatically increase the city’s proportion of greenery to combat air pollution and urban heat. The government has planted 15 million trees since 2014 and will add another 15 million more trees by 2022. This includes 2.1 million trees that will line car-only highways such as the Olympic Expressway and Gangbyeon Expressway. Altogether, the trees will be able to absorb particulate pollution equivalent to the amount emitted by 64,000 old diesel cars per year, and produce oxygen equivalent to the amount inhaled by 21 million adults annually.

“For our future generations, we have broken away from our traditional development methods, and focused on urban regeneration that preserves memories, connects places and creates new value.”

By 2021, the government will also grow two large forests, near Bukhansan in northern Seoul and Gwanaksan in southern Seoul respectively, and create smaller forests in 30 school zones so that children in the city can experience nature more easily.

In an earlier speech, then-Mayor Park summarised his administration’s efforts to build a better Seoul. He concluded: “For our future generations, we have broken away from our traditional development methods, and focused on urban regeneration that preserves memories, connects places and creates new value. We are now ready to share our experiences in governance and innovation, and will continue to cooperate with other cities to address common challenges and create a sustainable future.” O