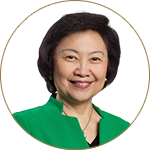 Dr Cheong Koon Hean is Chair of the Lee Kuan Yew Centre for Innovative Cities as well as Professor of Practice in the Singapore University of Technology and Design. She is concurrently Chairman of the Centre for Liveable Cities under the Ministry of National Development, Singapore.

Dr Cheong has played an active role in the urban transformation of Singapore over the years. She was the CEO of the Housing and Development Board (HDB) from 2010 to 2020, overseeing the development and management of over 1 million public housing flats. At HDB, she introduced a new generation of public housing and implemented large scale sustainability, biophilic and smart features in HDB towns.

Dr Cheong was also the CEO of the Urban Redevelopment Authority (URA) from 2004 to 2010 and steered the urban planning and development of Singapore, contributing her extensive experience in strategic land use planning, urban design, conservation of built heritage and the real estate market. During her tenure, she uplifted planning and design standards and oversaw the development of major growth areas, notably Marina Bay the new city extension. She was concurrently appointed the Deputy Secretary of the Ministry of National Development for 16 years from 2001 to 2016, overseeing urban development, public housing and real estate policies.

An active contributor to international discourse on urban issues, Dr Cheong was a former Deputy President and current Council Member of the International Federation of Housing and Planning, a former global Board trustee of the Urban Land Institute and member of the World Economic Forum’s Real Estate and Urbanisation Council. She has also served on several international expert panels advising on governance, planning and sustainability, including the master planning of the Sino-Singapore Tianjin Eco City in China. She also serves on the Asia Sustainable Infrastructure Advisory Panel.

She is currently a board member of the National University of Singapore (NUS) and is on the Advisory Committees of NUS School of Design and Environment, NUS Engineering Faculty, Singapore Sustainability Academy and the URA Academy. Dr Cheong has served on the boards of the Urban Redevelopment Authority, Housing & Development Board, Jurong Town Corporation, National Heritage Board, Jurong Port and the Civil Service College.

A Colombo Plan scholar, Dr Cheong holds a 1st Class Honours degree and University Gold Medal in Architecture and a Doctor of Architecture honoris causa conferred by the University of Newcastle; a Master’s degree in urban development planning from University College London and has completed the Advanced Management Programme in Harvard Business School. She is also a Tan Swan Beng Endowed Professor in Nanyang Technological University, the Institute of Policy Studies’ 5th S R Nathan Fellow, Fellow (Life) of the Singapore Institute of Architects and Honorary Fellow of the Singapore Institute of Planners. Prof Cheong has been conferred multiple awards, notably the Meritorious Service Medal for outstanding public service, the University of Newcastle’s Convocation Medal for Professional Excellence and the 2017 Asia-Pacific Landscape Architecture Luminary Award by the International Federation of Landscape Architects. In 2016, she became the first Asian to be conferred the Urban Land Institute Prize for Visionaries in Urban Development as well as the Council on Tall Buildings and Urban Habitat’s Lynn S Beedle Lifetime Achievement Award. O