By targeting pollutive construction, cities can eliminate a significant portion of their greenhouse gas emissions and clear their path to a more sustainable future. These are some of the cities leading the way through measures such as mandating zero-emissions construction sites, developing low-carbon materials and 3D-printing buildings. 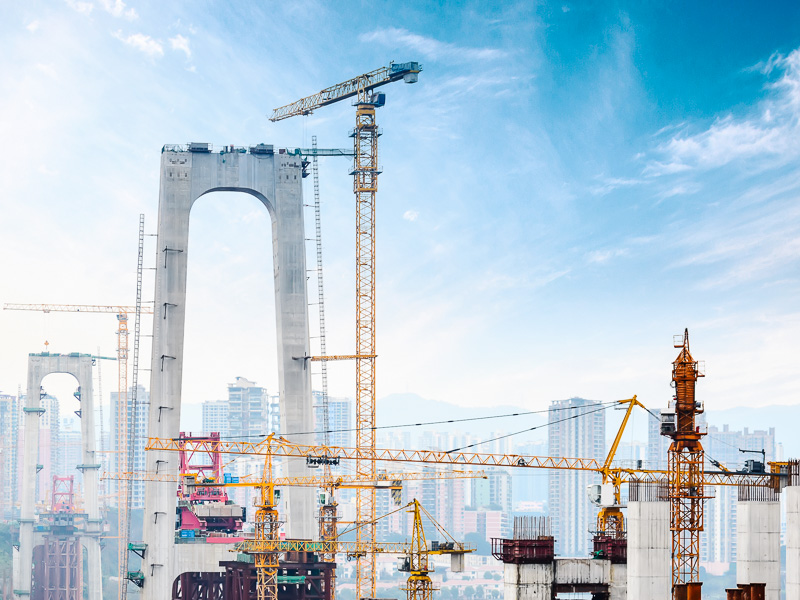 In November 2020, the Mayors of Oslo, Budapest, Mexico City and Los Angeles pledged to halve their cities’ greenhouse gas emissions from construction by 2030, aiming to play their part to make the carbon-intensive construction sector more environmentally friendly. Among other measures, the cities will normalise the use of electric machinery in construction by employing them in government projects, approve at least one flagship net-zero emissions construction project by 2025, and publish annual reports on their progress.

Mr Raymond Johansen, Oslo’s Governing Mayor, explained that with construction accounting for about a quarter of emissions worldwide, reforming the sector is crucial to limiting climate change and global warming. Furthermore, with the United Nations projecting that the global urban population will increase from 4.4 billion people in 2020 to 6.7 billion people in 2050, cities will need to provide far more housing and other infrastructure, making their transition to sustainable construction more urgent.

To minimise construction’s emissions, cities can tap on a range of solutions, such as improving processes, incorporating emissions standards in development tenders, and promoting the use of low-carbon materials.

Since 2017, Oslo in Norway has required that contractors for municipal construction projects use only electric, biodiesel or other fossil fuel-free machinery and vehicles on the construction sites and for the transport of materials and waste to and from the sites. By 2025, it will raise the bar even higher and mandate the use of only electric and other zero-emissions solutions on the sites, and zero-emissions or biogas vehicles for the transport of materials. It said that the requirements are necessary to achieve its goal of reducing its emissions by 95 percent by 2030 compared to its 2009 baseline. With municipal projects accounting for one in five of the city’s construction sites, the standards are also spurring positive change in the private sector. “Even though not all machinery has fully electrical versions available, the market is quickly adapting and developing new solutions,” the city noted. “By setting standards, public developers can influence change in the market.”

Other cities also plan to cut construction’s emissions through benchmarks and requirements. London, Britain, recently concluded a three-month public consultation on a proposed prerequisite for developers to submit Whole Lifecycle Carbon (WLC) analyses for building projects that exceed 150 units or specified floor spaces depending on their location. Such assessments would detail not just the buildings’ emissions from daily use, which are already targeted for curtailment under existing policies, but their embodied emissions.

“As methods to reduce operational emissions have become better understood, and as targets have become more stringent, these emissions are now beginning to make up a declining proportion of a development’s WLC emissions. Attention needs to turn to WLC to incorporate embodied emissions,” the city explained. Under its proposal, developers would calculate their projects’ emissions at each stage of the buildings’ lifecycle, from procuring raw materials, to construction, use, demolition and disposal. They would also list actions taken to decrease the emissions, compare them to provided benchmarks and explain why if they fall short. The city is evaluating its consultation’s feedback and will announce more details at a later time.

As part of its wide-ranging efforts to become a carbon-neutral city by 2050, Los Angeles in the United States has required bidders for public construction projects to supply information about the environmental impact of the steel, sheet glass and insulating mineral wool that they would use for the works. By July 2021, it will accept only bids where the materials’ potential to contribute to global warming falls below prescribed limits. It is also considering imposing these conditions on other carbon-intensive materials. Furthermore, it is examining building materials that could sequester greenhouse gas emissions, and will publish a report on its findings and recommendations for future construction by June 2021. 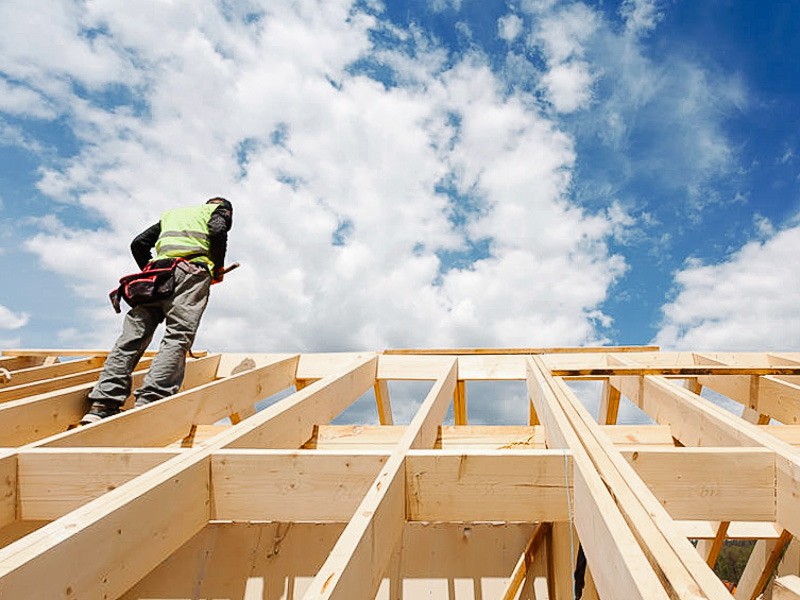 Can cities use timber more extensively as a concrete alternative? © brizmaker/ 123rf.com

Some cities are encouraging developers to replace concrete, a carbon-intensive product that is responsible for eight percent of global emissions, with sustainable alternatives. Vancouver in Canada has provided technical assistance to firms building with mass timber, which is made up of small pieces of lumber laminated together to form fire-resistant components for floors, walls, columns and beams, because it could reduce construction’s embodied emissions by 25 to 45 percent or more.

The city also convened an external Mass Timber Advisory Committee in 2019, with architects, engineers, contractors, scientists and other experts, to suggest ways to boost the material’s use. In June 2020, with the committee’s support, it doubled the permitted height for mass timber buildings from six to 12 storeys. It will also study potential issues with higher buildings, such as excessive swaying at the top due to the wood’s lightness, and find ways to solve them. The city noted that other challenges need to be overcome, including many firms’ lack of familiarity with the material, and the design limitations that it imposes on buildings. Experts added that cities incentivising use of the wood should mandate its sourcing from sustainably managed forests, to avoid inadvertently supporting deforestation.

Several cities, including Honolulu in the state of Hawaii in the United States and Sydney in Australia, are exploring the use of greener types of concrete in public construction projects. In April 2019, Honolulu passed a resolution to consider using carbon dioxide mineralised concrete, which is better for the environment because it is formed by injecting carbon dioxide into standard concrete mixes, sequestering the greenhouse gas. In an ongoing trial, the Hawaii Department of Transportation poured 150 cubic yards (approximately 115 cubic metres) of the mineralised concrete, containing 1,500 pounds (approximately 680 kilograms) of carbon dioxide, next to the same amount of a regular concrete mix at an access road for the Kapolei Interchange for motorists, so that it can do a side-by-side comparison to determine how the former needs to be adjusted for use in road projects.

Sydney developed lower-carbon concrete made partially from waste from its coal-fired power stations and steel manufacturing plants, and is currently trialling the material’s performance and durability on a major road leading to the Sydney Airport. The city calculated that its concrete’s production generates just one third of the emissions of traditional concrete, and researchers will use the trial’s findings to formulate guidelines for its wider application.

“We need to unite businesses, industry and government on all levels to advance climate action. Together, we can ensure that the air in our cities is cleaner and healthier to breathe.”

Of printing and prefabrication

As technologies mature, they can open up opportunities for cities. With 3D printing machines becoming increasingly versatile and powerful, Dubai in the United Arab Emirates has set the goal of using them in at least 25 percent of new buildings’ construction by 2030, to cut labour costs by 50 to 80 percent, construction waste by up to 60 percent, and overall costs by 50 to 70 percent. In traditional building projects, workers put together wooden forms and pour concrete into them to make walls and other structures. Depending on the complexity of the building’s design, some forms may be used only once. By using 3D printing for construction, no forms are needed, eliminating a significant source of waste, among others.

When Dubai used the technology in 2019 to erect an ambitious 640-square-metre, two-storey building for the city’s administration, which is still the world’s largest 3D printed building, it completed the construction in two weeks, halved the number of workers required to 15, decreased its cost from about AED 2.5 million to under AED 1 million (approximately USD $680,740 to under USD $272,230), and produced 60 percent less waste, benefiting the environment. To further the use of 3D printing in construction and other fields, the city will establish a district devoted to its development and deployment, with research centres, start-ups, international firms and business accelerator programmes.

Cardiff in Wales and Beijing in China, on the other hand, are among the cities tapping prefabricated construction to minimise their carbon footprint. Mr Edward Rees, regional director of housing construction firm Wates Residential which was appointed by the Cardiff Council to pilot prefabricated, affordable public homes in the city in 2019, noted that manufacturing their components off-site in indoor, controlled conditions decreases energy use. “It also shortens our time on-site, reducing emissions and disruptions for residents,” he said. Beijing, for its part, has been using prefabricated components to build all new public subsidised homes and government-invested buildings.

When Mr Johansen announced Oslo’s pledge to halve its construction emissions, he stressed that cities must do more to shift the sector onto a more sustainable path. He said: “We need to unite businesses, industry and government on all levels to advance climate action. Together, we can remove fossil fuels and reduce emissions from construction sites altogether. This will make them safer, quieter, cleaner places to work, and ensure that the air in our cities is cleaner and healthier to breathe.” O