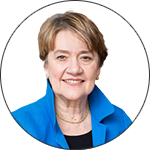 Marilyn Jordan Taylor is Professor of Architecture & Urban Design at UPenn. She had a distinguished tenure as Dean of the School of Design at UPenn from 2008 - 2016, following a 35-year career with Skidmore, Owings & Merrill as architect and urban designer as well as partner and chairman of the firm, the first woman to hold this position.

Over her years with SOM based in Washington DC and New York, she led multidisciplinary teams responsible for many of the firm’s largest and most complex projects, creating the firm’s Transportation and Airports Group as well as leading its Urban Design practice. She led award-winning design teams on a wide array of transformative projects including JFK Terminal 4, Singapore Changi Terminal 3, the Ben Gurion Airport, the revisioning of New York’s Pennsylvania Station and Moynihan Station, Providence Capitol Centre, and the Denver Union Station revitalisation as the heart of a vibrant new neighbourhood.

Always active in civic affairs, she was elected the first and only architect and the first woman to serve as Chairman of the Urban Land Institute, a non-profit research and educational institution, where she championed a renewed focus on cities, sustainable communities, and infrastructure investment. She also served as President of the AIA New York Chapter, the Forum for Urban Design, and the New York Building Congress as well as Chair of the AIA Regional and Urban Design Committee and co-Founder of New York New Visions. She was named a David Rockefeller Fellow on the Partnership for New York City, the Penn Institute for Urban Research, and the Singapore Centre for Liveable Cities. She continues to participate on numerous civic boards, including Global ULI, the Delaware River Waterfront Corporation, the Urban Design Forum and the Regional Plan Association.

A much-admired architect known for her distinguished and passionate involvement in the design of large-scale urban projects and civic initiatives, she is recognised worldwide as a thought leader in urban design and infrastructure as well as a woman pioneer in the fields of architecture, transportation and construction. Her global stature is complemented by her down-to-earth demeanor and proven ability to interact easily with constituencies across communities, government, industry, and academia, both locally and internationally. She is a leader who exudes not only intellectual breadth but also deep enthusiasm and compassion in her dedication to enhancing the vitality of communities through design.

Taylor attended Radcliffe College, MIT and the School of Environmental Design at Cal Berkeley. She is the mother of two children; her son Brainerd is an architect and daughter Alexis is a planner working on building resilience by design. O