Seoul is awarded the 2018 Prize for its successful transformation from a bureaucratic top-down city into the inclusive, socially stable and highly innovative city we see today. 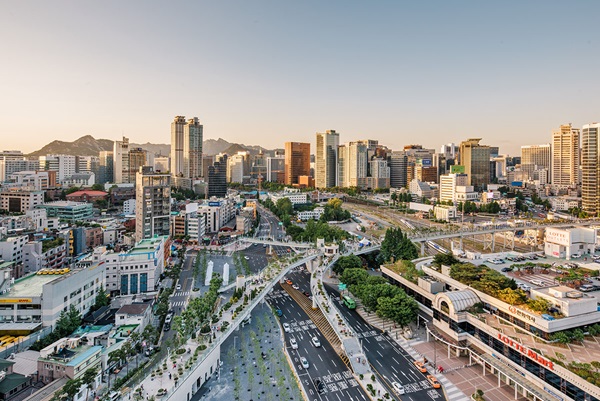 SEOUL is recognised as the role model for megacities with a will to change. With a leadership that dares to take bold decisions and a government that devises innovative problem-solving methods, the city has successfully turned itself around from a highly bureaucratic top-down city with rising tensions between the government and its people, into the inclusive, socially stable, and highly innovative city found today. As shown in Seoul’s successful and impactful high quality projects to repurpose urban infrastructure, the city has proven itself as an excellent example where leadership, commitment to citizen engagement, data-supported problem-solving decisions, and creative designs can transform the built environment, add vibrancy and improve quality of life.

Like many other cities that experienced a very fast pace of urbanisation, Seoul found itself confronting many urban challenges at its peak. Following the city’s democratisation in the 1990s, the government faced increasing resistance from a citizenry which had been largely left out of development decisions in the past, which could have brought the city’s developments to a screeching halt. Moreover, Seoul was burdened at that time with the task of providing for a burgeoning car-based society, which in turn led to other issues such as environmental degradation.

The city recognised that its relentless pursuit of economic success over a relatively short period of time was at the expense of quality of life, which could make the city lose its appeal quickly. Seoul overcame this through its election of successive visionary leaders in the 2000s who demonstrated strong political will to take on these challenges, and displayed foresight to implement a series of catalytic projects – such as Dongdaemun Area Regeneration to shift Seoul’s focus from traditional manufacturing to design – that would bring about benefits for the entire city. The city leaders understood that proper communication under the new circumstances was the way forward to achieve buy-in from both the people and stakeholders. Through rigorous engagement and negotiation with conflicting parties representing various interests including traffic disturbance, business losses, and historic restoration, the city formulated a set of conflict management strategies, which eventually led to a dedicated team of negotiators within the Seoul Metropolitan Government today and became the city’s “modus operandi” in urban development projects. These strategies help the city achieve impactful and effective results, and in turn win over even the most reluctant citizens over time, and align their aspirations with the city’s vision.

The Seoul Master Plan 2030 is a highly remarkable turning point in the city’s planning processes. Under Seoul’s inspiring leadership, the city made the bold move to make citizen participation the norm of all plans, and bottom-up processes its primary focus. Ground-up processes are incorporated in day-to-day operations under the Community Governance Project where residents are given a say over local issues that affect their communities directly. Citizens can also decide the use of up to 5% of the entire city budget (or 55.5 million KRW) under the Public Participatory Budget System. Through regular monitoring and publishing of results in the press, and its exemplary use of big data in its decision-making to focus even on minute details, the city has ensured utmost transparency to its citizenry; no one is left out. The city not only managed to build trust with the citizens, but also assured them that engagement is not merely a token gesture, but one that will truly shape and reshape the future of the city.

Seoul, particularly in its urban core areas, demonstrates boldness in shifting away from car-oriented transportation to people-centric spaces, a challenge that many cities are struggling with today. Seoul recognises that the transition from private cars to mass transit is not an overnight task and tackles this through a comprehensive set of measures and the use of big data, to make public transport as seamless and convenient as possible. Most notably, through the reclamation of public spaces for people from cars, such as the removal of an elevated highway to restore the former stream at Cheonggyecheon, the pedestrianisation of Yonsei-ro, and the conversion of the Seoul Station Overpass into Seoullo 7017 – a 1 kilometre-long lushly planted elevated walkway with pockets of activities along the way, the city sends a strong signal that the future of the city is one where people come first, not cars.

As megacities continue to mature and age, deterioration of its urban infrastructure is inevitable. Seoul is highly innovative in its approach to rejuvenate its modern heritage and is constantly seeking creative ways to inject vibrancy and a breath of fresh air into its urban environment, which the city termed as “development without demolition”. The projects Makercity Sewoon – a rehabilitation of seven commercial superblocks built in the 1970s through the sensitive insertion of new interventions and uses, and Mapo Culture Depot – a conversion of disused oil tanks into a cultural venue and public space, offer new perspectives in repurposing infrastructure while preserving collective memories of the people.

As cities become larger and more difficult to manage, achieving social sustainability may be a much bigger challenge than extending economic and environmental sustainability. Should Seoul not have taken the bold and unusual step to make its citizens the creators of their own city plan, it could have further aggravated the already built-up tensions between the people and the government, and orchestrated its own decline. By turning the people into active participants of the city’s development, Seoul demonstrated that a truly bottom-up city is possible, where the citizens own their shared city. O