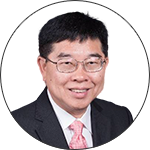 Mr Ng is also appointed by the Minister for National Development as the Registrar of the Board of Architects, Singapore since 2006, with the mission to enhance competency, integrity and professionalism of the practice of architecture in Singapore. As the Registrar, he chaired the ASEAN Mutual Recognition Agreement on Architectural Services from 2006 to 2009 and was instrumental in the setting up of the ASEAN Architects Council. He also served as Chairman of the ASEAN Business Services Sectoral Working Group from 2010 to 2017, with the mission to achieve mobility of professionals within ASEAN. He was also involved in the APEC Architect Project since 2006 and was also instrumental in setting up the new Reciprocal Recognition Framework.

Mr Ng has extensive experience in the planning, design and implementation of public housing in Singapore. In his long career with the HDB, he has been involved in the master planning of new towns and design and supervision of various types of projects including high rise public housing, commercial, industrial, institutional, Main Upgrading Programme (MUP), Hawker Upgrading Programme (HUP) and also studio apartments for the elderly. With more than 20 years experience as an architect, Mr Ng has introduced many innovative design solutions to bring up the standards of public housing which is comparable to those of private housing.

He was actively involved in the World Cities Summit (WCS) since its inauguration in 2008 and served as the Managing Director from 2012 to 2018. WCS is an exclusive and premier global platform for government leaders and industry experts to address liveable and sustainable city challenges, share integrated urban solutions and forge new partnerships. The key events include organising the Mayors Forum, the Young Leaders Symposium and the Lee Kuan Yew World City Prize Lecture, Forum and the Award Ceremony and Banquet.

He is appointed as the Prize Secretary for the Lee Kuan Yew World City Prize since 2009. The Prize is a biennial international award that honours outstanding achievements and contributions to the creation of liveable, vibrant and sustainable urban communities around the world. The Prize is awarded to cities and recognises their key leaders and organisations for displaying foresight, good governance and innovation in tackling the many urban challenges faced, to bring about social, economic and environmental benefits in a holistic way to their communities. Through this Prize, Singapore hopes to facilitate the sharing of best practices in urban solutions among cities and spur further innovation in the area of sustainable urban development. O