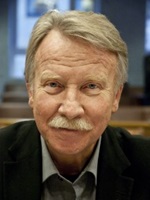 Mr Ilmar Reepalu was born 1943 in Estonia. He holds a Master of Science in Civil Engineering and Architecture from Chalmers University and a Supplementary Degree in Architecture from the Royal University College of Fine Arts. From 1970-1985 he worked as architect in Gothenburg specialising in sustainable city planning. From 1985-1994 he was Vice Mayor of Malmö. Since 1994 he is Chairman of the City Executive Board and Lord Mayor. From 1999-2007 he was President of the Swedish Association of Local Authorities and Regions, and since 2007 he is its Vice President. He also is member of the Policy Committee of the Council for European Municipalities and Regions (CEMR) since 2001. He is a member of the EU Committee of Regions since 2007 and the former chairman of its Commission for Climate, Environment and Energy (ENVE). O