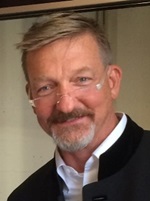 Dr Chris Luebkeman’s interest in the built environment blossomed early, propelling him to pursue a multi-faceted education, beginning with engineering and culminating in a Doctorate in Architecture from ETH in Zurich, a city to which he remains deeply connected. Chris gained valuable experience as the protégé of esteemed Spanish Architect, Santiago Calatrava. Subsequently he turned to his other love, education, by accepting teaching positions at several prestigious universities. In 1999, Chris joined Arup as the Co-Director for Research and Development. He later formed the Foresight + Research + Innovation team.

Dr Luebkeman spends the majority of his time travelling the world to give keynote addresses, talks, workshops and expert interviews to a wide variety of government agencies, non-profits, corporations, schools, media outlets and industry groups. Ostensibly, Chris’ mission is to facilitate conversations about how to best embrace change and its effects on the built environment, but in so doing he acts as an indispensable emissary to the very groups whose work intersects with that of Arup, building rapport and cultivating relationships with future clients. O